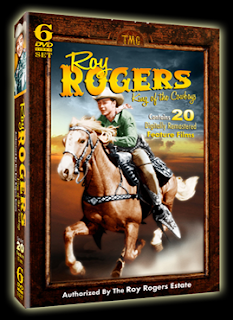 The more I see of Roy Rogers, the better I like him.  While I don't specifically recall seeing Roy's features on TV when I was under ten, his TV show started in 1951 when I was six and is one of my earliest TV memories.  I might have watched the first year at a friend's house since we did not have television that early.

I have previously blogged about the Roy Rogers Auction and about "Happy Trails Theater."  What's new today is... more "Happy Trails Theater!"  A 6-DVD set has been issued by Timeless Video, an excellent provider of classic TV and movies. Check out their numerous other offerings.

The set contains 19 episodes of "Happy Trails" plus the bonus film "Cowboy and the Senorita" (1944), which is the first film Dale made with Roy and is the only film shown complete at 78 min.  All the others are abridged to around 62 min, which includes the credits and intros.  Some comments at the IMDB say don't buy the set because of the massive cuts in the features.  I sympathize because most of the films are copyrighted and these are the only versions for sale.  Some of Roy's features like "Song of Texas" were cut for TV in the 1950s to 54 minutes and do not seem to survive anywhere in a complete form.  Most of these are copyrighted films obtained from Republic in 1988 when the new intros were filmed.  "Trail of Robin Hood" could have been preserved complete and in color in 1988, but where are those missing scenes today?  Why do the shows run 62 minutes?  Were they intended for a 90-minute time slot that would have included 28 minutes of commercials? 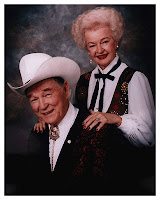 Forget the cuts, this is a wonderful set for the interviews and bonuses.  Bonus films include a "Roy Rogers Biography," "Museum Tour," and documentary on Roy's many sidekicks.  The guests include 5 segments talking with Gene Autry and Pat Buttram, 5-time co-star leading lady Penny Edwards, Iron Eyes Cody and Roy Rogers Jr.  Roy Rogers (78 at the time) and Dale Evans (75) are charming hosts and interviewers.  Their lifelong friendship with Gene Autry and Iron Eyes Cody is quite apparent.  Discussions about Gabby Hayes are fascinating.  They appear much as they look in this photo from 1985.

There is plenty of variety in the plots of the films.  "Sunset in El Dorado" was written as a solo starring Dale, until V-E Day changed Roy's draft status and he did not enter the army after all.  Dowager Margaret Dumont plays Dale's Aunt who proves no match for Gabby Hayes.  In "Trigger Jr." (1950, Trucolor) Roy is hooked up with a circus and a killer horse named Phantom; he even goes to prison to save Trigger from a murder charge.  In "South of Caliente" (1951) Roy transports horses to Mexico, aided by dual sidekicks Pat Brady and Pinky Lee.  In "Spoilers of the Plains" (1951) Roy works for an oil company but comes to the aid of experimental rocket scientists when foreign spies steal secrets.  Penny Edwards is his co-star in this one.  Watch the chase/fight scene between two wagons full of men when one of the stunt men falls under the wagon and is run over.

Just get this set from Timeless, or watch "Happy Trails Theater" from Netflix. 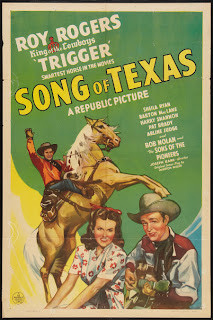 Switching gears a bit, I sell 58 public domain Roy Rogers westerns on DVD on my website. That may be all of them in public domain; I should check. For quite awhile I did not offer "Song of Texas" (1943) because the only copies I could find were pretty terrible in quality. A few months ago I got a call from Tom Connor who has a theater in Stockton, CA. Tom likes to run B-westerns once a month and was looking for "Song of Texas." When he heard my report it came out that he had an original 16mm print of the film but that he no longer ran film, only video projection.  I connected Tom's print with Derek Myers to transfer the film and we all have nice video copies now.

"Song of Texas" is a terrific Roy Rogers film!  Roy and the Sons of the Pioneers work the rodeo circuit for bad-guy Barton MacLane.  When they try to quit to start their own rodeo group, Barton tries to put their ranch out of business.  Sidekick Pat Brady has more to do than usual with his own romance.  Although unbilled, Yakima Canutt must have staged the two spirited stagecoach races since he has a short dialog scene with Roy.  The first scene in the picture shows Roy and the gang, even Trigger, performing for sick children at a hospital, thus capturing a true event that Roy repeated many times for his fans.  Watch it right here!


Roy Rogers -- the greatest cowboy hero of all time to millions of kids!

Visit my website www.fesfilms.com.
Posted by Ron Hall at 11:38 AM