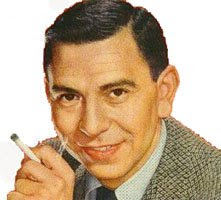 ...is that cigarette ads were ever allowed on TV! Or that smoking was invented. Jack Webb was a smoker. Webb suffered from acute asthma from age six until adulthood, somewhat surprising for a man whose cigarette intake reached three packs a day at its peak. He died in 1982 of a massive heart attack at age 62.

Not renewed means those episodes are in the public domain. Since I have sold public domain for years I can attest that Alpha Video, among others, would have 40 volumes of Dragnet on the market if they could find them. Yet only the same 24 or so episodes show up again and again on various releases. Maybe 35 are known to exist, or maybe 40, but the inescapable fact is that at least 130 public domain Dragnets have been lost for years. The first episode -- "The Human Bomb" -- is lost. Since they were widely syndicated in the 1950s and 60s on 16mm prints, there is hope of an unknown collection surfacing someday. 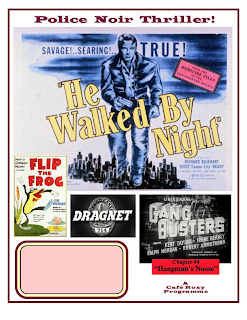 While the Dragnets do not have episode titles in the credits, most of them after the first show are titled "The Big (Something)" as in "The Big Producer," "The Big Shoplift," "The Big Hit-And-Run Killer," and you got it. "The Big Crime" from September, 1954 is a lost episode. I took that as the series title for my recently completed "13 Big Crimes" Café Roxy programs. The features are a mixture of film noir like "Detour" and murder mysteries like "The Kennel Murder Case."

Here is the poster for Big Crime Program #4 "He Walked By Night," which features Jack Webb as a police detective in the film that gave him the idea for Dragnet. Plus a Dragnet episode, cartoon and serial chapter. If you put this poster in your café window for a week, would audiences show up to see the films? The cartoon, serial and TV show run about an hour. One can eat and drink quite a bit in an hour, then leave if they like or stay for the feature. That's the Café Roxy idea. Try it!

The series runs 13 shows instead of 12 to fit the 13 chapters in the serial Gang Busters. I first saw this serial as a child one chapter a week (I'll tell that story later). The villain is Prof. Mortis, played by Ralph Morgan, who kills gangsters only to bring them back to life to be his slaves. Mortis lives in a hide-out under a subway. An exceptional chapter ending is chapter 3. The girl reporter heroine is kidnapped by a wounded gangster who leads the police on a lengthy "dragnet" pursuit. When finally cornered he forces her out on the running board as a shield. This was 1942 and all cars had running boards. Police cars block the road ahead. They swerve onto a bridge, crash through the railing and plummet onto traffic below. Boom! Continued next week.
Posted by Ron Hall at 8:22 AM No comments: