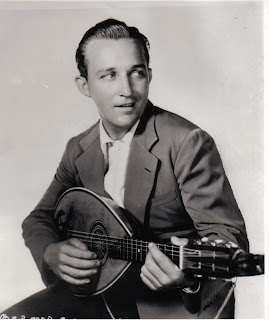 Yesterday I was listening to the Alex Bennett radio program on Sirius XM when Alex was discussing that Frank Sinatra was the first American Teen Idol with screaming, adoring fans. I'm a big Sinatra fan myself and give Frank all the credit and superlatives imaginable, but it's time to set the record straight. As far as firsts go, Bing Crosby became the first American Idol in the fall of 1931. I thought about sending Alex an email to explain why, but then got a better idea. A film clip is worth a million words so I created the montage below.

It's time to start a little crusade to tell the world that Bing was first and why.  "American Idol" is still running strong on TV in its 10th or 20th season.  The "public" may not be that interested in history, but they do have curiosity about their current interests.  Discovering new singers, with perhaps a touch of infatuation, never goes out of date.

My good friend and associate Bob DeFlores and I released a documentary about Bing Crosby's rise to fame in 1996 called "The Road to Hollywood" that concentrates on this story.  Bing struggled in his early days when he was one of the Rhythm Boys singing group with the Paul Whiteman Orchestra.  His problems stemmed from his profligate early lifestyle of drinking to excess, late night partying, mingling with show business and generally living the high life to excess.  Bing even got kicked out of Hollywood in mid-1931 but suddenly soared to fame later that year.  So lots of drama and surprises in his early years!

Back to what it takes to be an American Idol.  I would argue no performer could become one until the entire country was able to experience a meteoric rise to fame at the same time, which means both seeing and hearing a singer, which means it could not happen until the era of sound movies.  It's also important for the public to make their own discovery.

Certainly the first super star of sound films, and a superb singer as well, was Al Jolson.  Bing always credited Al as being his inspiration for going into show business.  But Al was 41 when "The Jazz Singer" debuted in 1927, he was never a handsome man, he belted "Mammy" songs to the back of the balcony and he was never idolized by women, young or old, in a romantic way.  Bing Crosby was 28 when he made good in late 1931, he crooned romantic songs and certainly had that elusive sex appeal -- all the ingredients needed to capture the heartstrings of the world -- and he did in a superlative fashion that had never happened before.

Although obviously lacking television and the Internet, here is how all four of the mass media of the time came together for Bing in late 1931 / early 1932.

RECORDS.  After four years of singing on Paul Whiteman records where Bing was not identified or listed as one of the Rhythm Boys, his first solo hit was issued in January, 1931: "I Surrender Dear."  Bing had ten hit records in 1931, including these #1 hits: "Just One More Chance," "Out of Nowhere," and "At Your Command."

RADIO.  Until the middle of May, 1931, Bing had built a radio following on the west coast with Gus Arnheim's orchestra broadcast from the Cocoanut Grove.  The Rhythm Boys walked out on their contract and Bing was banned from working in Hollywood.  He moved to New York City to find work and on Sep. 2 began a nightly radio broadcast for CBS: "Fifteen Minutes with Bing Crosby."

MOVIES.  Comedy producer Mack Sennett saw Bing at the Grove and signed him to star in six two-reel musical comedies.  The first, "I Surrender Dear," was filmed in March of 1931 and released in New York on Sep. 13.  Sennett's second short "One More Chance" was released on Nov. 15.

Note the timing of Bing's national radio show and first movie both taking America by storm in September, 1931, after a string of hit records that had also been playing on the radio.  The last piece of the puzzle was the chance for fans to see him live. 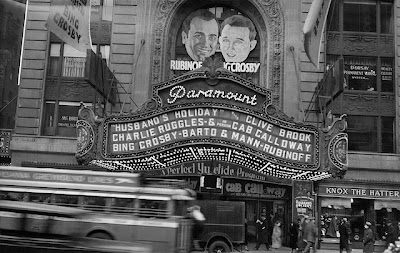 LIVE ON STAGE!  On Nov. 6, 1931, Bing was engaged at $2,500 a week to appear four times daily in New York's Paramount Theater where as emcee he sang a few songs and introduced other acts like the Mills Brothers, Cab Calloway, Lillian Roth, Burns & Allen and the Boswell Sisters.  During this wildly popular stint Bing may well have been the first white singer to actually perform with African Americans onstage in a major venue, but that's another story.

Bing remained in New York until mid-April, 1932, with appearances at the Brooklyn Paramount Theater and then back to the Paramount on Broadway.  He toured cross-country from April 15 to June 12 to great acclaim on a long trip back to Hollywood where he filmed "The Big Broadcast" for Paramount that opened on Oct. 14.  Back in New York, Bing appeared at the Capitol Theater Dec. 2-8 singing, dancing and clowning with Bob Hope!

It was during his sudden rise to national fame in late 1931 in all of the existing media that every woman in America discovered Bing Crosby and many indeed swooned for the crooner. No actual film footage exists of his personal appearances, but his popularity was alluded to in a brief clip from his Sennett short "Blue of the Night" and in his first scene in "The Big Broadcast." An interesting aspect of the Sennett shorts is that Bing played himself in many of them -- the radio and recording star -- but his fans did not yet know what he looked like and so did not believe him when he said he was actually that Bing Crosby! An illustration of this from "I Surrender Dear" is in the montage that follows.  The second segment shows Bing mobbed at the end of a night club song in Sennett's "Blue of the Night."  The clearest proof Bing was idolized and assaulted by fans in 1932 is satirized in "The Big Broadcast."

I feel Bing has never been given credit for being the First American Idol for a number of reasons.  After numerous record setting live shows thru May of 1933, Bing settled in Hollywood for good making 3 movies a year for Paramount, continuing a weekly radio show, cutting more hit records and starting a family with wife Dixie.  He had to cut down somewhere and that would be on personal appearances.  His later successes in every venue of show business, including TV, eclipsed his claim to being America's first teen idol.  History tends to remember later and more significant accomplishments, in Bing's case the Oscar, the Road pictures, "White Christmas," most hit records, most popular actor of the 1940s, "Mr. Christmas" and much more.

I'm sure Bing would not have cared about being the first idol, nor would Frank Sinatra have cared if history eventually bestows this title on Bing.  After all, Frank was inspired to become a singer after seeing Bing in the Paramount Theater at the age of 16.  Their work together entertaining the troops during World War-II, in TV specials, in "High Society" and in "Robin and the Seven Hoods" are lasting tributes to their professional friendship and mutual respect.


Visit my website at Festival Films
Posted by Ron Hall at 11:37 AM No comments: