The Edgar Kennedy Restoration Project has gone to Kickstarter to seek crowd funding to produce a Pilot Episode of "The Edgar Kennedy Show."  Please visit to show your support and also pass the link along to any friends who share your interest in classic comedy.  The story is told from a different perspective in this Press Release.

It has been a joy to delve so deeply into the long film legacy of Mr. Kennedy, and I hope to continue until we reawaken worldwide interest in enjoying his films, particularly the nearly forgotten body of his 103 RKO shorts.

The process of discovering Edgar Kennedy has led me to think back on a lifetime of viewing vintage films.  When did I first notice Edgar and in which films?  So the rest of these notes are about me and old films rather than an ad to go check out Edgar on Kickstarter, but before I forget, please do that using the link at the end....


I’m certain the first time I ever saw Edgar was in the Universal serial “The Great Alaskan Mystery,” one chapter a week in a summer park series in the tiny Wisconsin town of Deerfield.  I was 8 or younger at the time.  Of course I did not know Edgar Kennedy from the hero, Milburn Stone.  Edgar was just the hero’s pal who survived a sinking ship, a glacier turning over, a crashing plane, a shack blowing up and a plunge down a mine shaft.  Edgar did not play a comic sidekick like Smiley Burnette, but a likable good-guy with character. 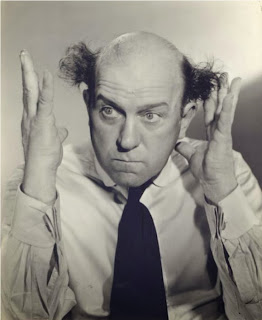 TV programming in the 1950s depended on the whims of local stations, and they never showed Laurel and Hardy or Our Gang in the Madison area when I was young.  Unbelievable!  Minneapolis was flooded with Hal Roach shorts and New York saw Edgar’s RKO shorts in a 1970s show called “Reel Camp.”  Not in Wisconsin.  We got The Three Stooges, B westerns, some serials and Paramount features, and I’m not complaining about those.  So outside of “The Great Alaskan Mystery” I had only noticed Edgar in “Duck Soup” by the time I entered high school.

My interest in silent films began with “Silents Please” on TV in 1960 and I soon found Blackhawk Films.  The first film I ever bought was the 8mm “Leave ‘Em Laughing” with Laurel and Hardy and, quite by coincidence, good old Edgar, though the Boys got all the laughs.  We moved to Madison for my high school and college years, which opened up film society showings at the University of Wisconsin.  Among my most memorable viewings ever, a film class ran “When Comedy Was King” one evening and opened it up to the campus.  The packed lecture hall held more than 400 who laughed until they fell off their chairs.  I mainly recall the “Big Business” finale with Laurel and Hardy, but an earlier highlight was the ice cream mayhem with Edgar from “A Pair of Tights.”

My introduction to Edgar Kennedy’s “Slow Burn” came in 1967 on the cover of Leonard Maltin’s fanzine “Film Fan Monthly” and in the article inside.  Leonard’s 1972 “The Great Movie Shorts” had a brief synopsis of all 103 Edgar “Average Man” shorts.  I could read about the RKO comedy shorts but had no way to view very many until nearly 30 years later.  The first one that made an impression was “Feather Your Nest” that I saw on “Matinee at the Bijou” on PBS in the early 80s.  Edgar must find a chicken that has swallowed an engagement ring, but a wily chicken farmer and yard full of white birds conspire against him.

I caught up on Laurel and Hardy when I moved to Minneapolis in 1969 where they were still on TV.  I watched most Our Gang shorts for the first time when I bought a 16mm collection from a TV station.  Edgar shines in supporting roles in many late silent and early talkie Hal Roach shorts with Laurel and Hardy, Our Gang, Charley Chase, Thelma Todd and The Boyfriends.  But let’s face the truth, Edgar was second banana in these films.  Jimmy Finlayson and Charlie Hall got more laughs, and Kennedy the Cop was easily replaced by Tiny Sandford.  The comic genius of Edgar Kennedy only blossomed in the sound era when he turned 40 and struck out on his own.

Fortunately, someone envisioned Edgar in a new kind of comedy, a domestic situational comedy that mixed family problems with slapstick.  That man was writer, director and Edgar’s good friend Harry Sweet.  Harry borrowed Edgar from Roach to make “Next Door Neighbors” for Pathé in 1931 and quickly followed with “Rough House Rhythm” released by the newly-formed RKO Radio Pictures.  In “Rhythm” Edgar was married to ditzy blonde Florence Lake, who was his screen wife 103 shorts later in 1948. RKO wanted more and turned out six Kennedy shorts every year through Edgar’s untimely death in 1948 of cancer at the age of 58.  In “Lemon Meringue” (1931) Dot Farley was added to the cast as Edgar’s bossy mother-in-law and Billy Eugene as Florence’s “Brother,” as Edgar called him.  Both sponged off poor Edgar and hindered more than helped in their mutual endeavors.  Although actor Jack Rice soon replaced Billy Eugene, the family dynamic began an unprecedented 17-year run that set the stage for all the TV sit-coms from 1949 to today.

I only really discovered Edgar’s “Average Man” series about ten years ago when I began watching them on DVD.  They are rarely shown on Turner Classic Movies, so vintage film fans have had little chance to see them and never in pristine quality. The Edgar RKOs are so darned inventive, hilarious and relevant today because Edgar always did and still does epitomize the average modern man beset with problems outside his control.  Naturally optimistic and likable, he takes on every challenge with a smile to sell vacuum cleaners, install a hot water heater, decorate a house or run a gas station, but his family and the world conspire to crush all well-meant intentions.  How long will his temper last?  Will pressure build until he explodes?  No, he accepts life's indignities by slapping his face and wiping it in his signature "slow burn" of frustration.

I have been discovering Edgar Kennedy my entire life and have much more to see.  I would love to see him as Daddy Warbucks in “Little Orphan Annie” (1932), in “Charlie McCarthy, Detective” (1939), in the 1938 mystery “The Black Doll” and in “Carnival Boat” (1932) in which Edgar and Harry Sweet play sidekicks to William Boyd and Ginger Rogers. These are not lost films, merely gems to watch for on TCM or at a Cinecon.  Publicity for Edgar and success with the project may lead to unearthing the lost “Lemon Meringue” short, which reportedly contains the largest pie fight ever staged.  My greatest hope is that “The Edgar Kennedy Show” will start others on the same joyous path of discovery.

Edgar’s RKO shorts are sure-fire crowd pleasers TODAY that every film fan will love to discover for themselves.  Try it!  You can watch many hilarious Edgar "Clips of the Week" starting with "Rough on Rents."  However, the challenge of getting new fans to watch anything old, from Laurel and Hardy to the Charley Chase, is immense, and fewer have even heard of Edgar Kennedy.  This is where all of you can help!  Please visit Edgar on Kickstarter, show your support and pass the link along to friends.  More information is in this Press Release which may also be shared to help spread the word.

Many thanks for helping to restore "Thanks Again" (1931) as the first step toward rediscovering Edgar Kennedy, his Slow Burn and his RKO sitcom short subjects.