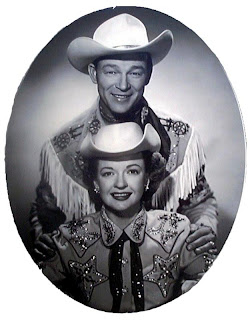 July 15, 2010: NEW YORK (AP) - Roy Rogers' stuffed horse, Trigger, has been sold at auction for more than $266,000 in Midtown. Christie's said Rogers' faithful companion was bought by cable's RFD-TV in Omaha, Nebraska, at an auction Wednesday of items from the now-closed Roy Rogers and Dale Evans Museum in Branson, Missouri. Roy Rogers' stuffed and mounted dog, Bullet, fetched $35,000 on the second day of an auction of the movie cowboy's belongings in New York City.

The television network's chief financial officer says Rogers' reflects the company's values. The station calls itself "Rural America's Most Important Network." CFO Steve Campione says the company hopes to start its own museum. He said the company is looking to buy more Rogers items at auction.

When I heard this news back in July I said to myself I should contact RFD-TV to see if they needed any Roy Rogers movies. I didn't. But better yet, they contacted me this past week inquiring about the Roy Rogers TV shows from 1951 to 1957. All episodes are in the public domain except for some from the final season. I mailed off some sample episodes on DVD-R, but recommend they acquire on BetaSP for maximum quality because RFD-TV is a national cable company. 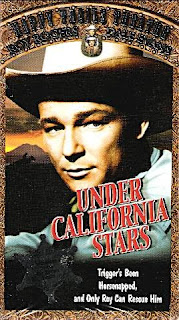 The big, big news is that RFD-TV has acquired 33 episodes in the "Happy Trails Theater" series and is currently airing them 3 times a week. Check out their schedule. Last week they ran Southward Ho. Debuting on Sunday is The Arizona Kid. So Happy Trails are back, only a bit different. In the original series an elderly Roy and Dale introduced each film and talked with guests like Iron Eyes Cody, Peggy Stewart, Gene Autry, their son Dusty and many more. Well, these intros are gone, but you can still enjoy them in the Happy Trails versions of Roy's westerns available from Netflix.
The new intros are by Dusty Rogers, aka. Roy Rogers Jr., and his son (I assume) Dustin Rogers. They give informative and professional insights into the film, then return after the feature to sing a song and tell stories. The time slot is currently 90 minutes. The original Happy Trails shows only ran about 65 minutes without commercials and in many cases the features were cut to fit this. I will be curious to see if they run full length features at times. If RFC-TV adds Roy's TV show, the slot could expand to two-hours.
The revamped Happy Trails Theater is the only vintage movies or TV shows currently on RFD-TV. As such it's a wonderful opportunity to attract new viewers and fans to B-westerns and to Roy Rogers in particular. I'm betting the popularity mushrooms.
Just in the last week I saw two of Roy's better films, courtesy of Netflix, that I had always wanted to see. Sons of the Pioneers (1942) co-stars Gabby Hayes and Pat Brady as Roy's sidekicks. They work well together a full 9 years before Pat became the "comical sidekick" on Roy's TV series. Roy pretends to be a milquetoast easterner so he can work undercover. His chemist training helps uncover the truth about fake foot and mouth disease. Go watch it! 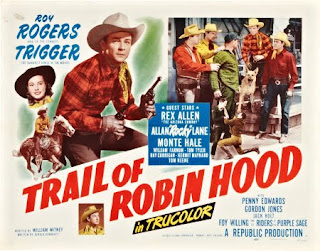 Of greater interest, and far more fun than I expected, was Trail of Robin Hood, a Trucolor gem from 1950. Roy plays a forest ranger or something using his own name, of course. Jack Holt, father of cowboy star Tim Holt, plays himself -- a retired old time cowboy movie star. The story even works in a screening from one of Jack's silent westerns. Penny Edwards is the girl and Gordon Jones as Splinters McGonigle is Roy's sidekick.

The very best Republic western director, William Witney, put a lot of innovation into scripts and action in the waning years of the B-western. The basic plot concerns the dread Christmas tree syndicate??? Jack Holt wants to sell the trees on his land dirt cheap so that poor families can all have a tree, whereas a big businessman wants to corner the market and jack up the prices. The bigwig is Penny Edwards' father so you know he's not really bad, but his chief henchman sure is.
In 1945 Republic filmed another great Roy Rogers Bells of Rosarita with Gabby Hayes and Dale Evans. In that film Roy played a cowboy movie star for Republic. The studio sent over 5 other cowboy stars to help Roy in the climax: Don Red Berry, Wild Bill Elliot, Allan Rocky Lane, Sunset Carson and Robert Livingston. Studio girl on the phone: "I'm sorry but John Wayne is on location and can't make it." 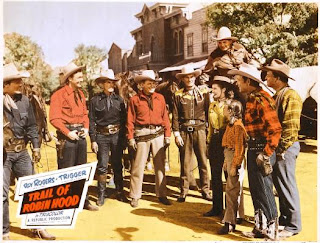 In Trail of Robin Hood Republic repeated this formula of guest stars in the climax. The bad Christmas tree guys scare away all wagon drivers in the area. Who will get the trees to market? The little girl in the story sees a wall of cowboy photos in Jack Holt's bedroom and gets the idea to invite them all to help out -- Allan Rocky Lane, Rex Allen, Crash Corrigan, Monte Hale, Tom Tyler, Kermit (brother of Ken) Maynard, Tom Keene and two more. The first surprise is William Bill Farnum who started films in 1914. Bill rides up and says: "I want to help too. I'm Bill Farnum. I rode with Jack 20 years ago."
Another old timer who started in 1915 rides up: "Hi Boys, I'm George Chesebro." Now George was on the ugly and scrawny side, ideally suited for playing in henchmen in well over 100 B-westerns. He strides into the bunch of good guys who turn away and will not shake his hand! Finally the little girl says, "Hey, wait a minute. I know you. You're always a meanie." George: "I know, but after making 20 pictures with Jack Holt, he reformed me." Roy: "In that case we can use you." And everyone welcomes George to the gang.

Watch the scene and a bit more of the cowboy all-stars here:


Get the complete Trail of Robin Hood from Netflix, or watch for RFD-TV to air it on Happy Trails Theater shortly before Christmas!


Visit my website at Festival Films
Posted by Ron Hall at 9:35 AM