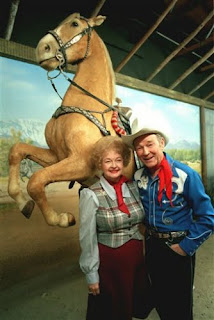 New York — The smell of horses and hay permeated the marble-floored galleries at Christie's in Manhattan last week as potential bidders previewed items including the preserved remains of movie cowboy Roy Rogers' famous horse Trigger. The auction house is selling items from the now-closed Roy Rogers and Dale Evans Museum in Branson, Mo., Wednesday and Thursday.

Unlike the fine furniture, paintings and jewelry that Christie's is famous for, the centerpiece of this auction is a stuffed and mounted horse rearing on its hind legs. It also will feature another type of horsepower - Rogers' 1964 Bonneville convertible adorned with collectible silver dollars, its door handles and gear shift replaced by silver-plated pistols.

Here are some Christie's photos of the Roy Rogers memorabilia up for sale. Everything up for bidding was on display, including the actual stuffed Trigger (sold for over $266,000), Trigger Jr., Bullet ($35K) and Dale's horse Buttermilk ($25K). Christie's said Rogers' faithful companion was bought by cable's RFD-TV in Omaha, Nebraska. CFO Steve Campione says the company hopes to start its own museum. He said the company is looking to buy more Rogers items at auction.

One item they should not have trouble finding on ebay for $50 is a 1943 issue of Life magazine featuring Roy on the cover and an inside story. Amazingly it sold for $1,375 at Christies, but that's a quirk of auctions! Could it be worth that much more just because Roy actually touched it? Someone who did not consider that thousands of other copies likely survive must have thought so. The much more collectable movie posters sold for under $1,000 each. 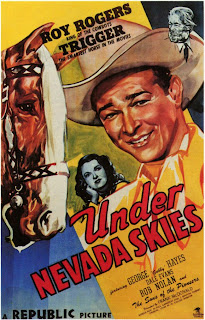 Roy started his museum in Hollywood around 1958. One can imagine fans flocking to the museum for years to relive memories of their cowboy hero whose movies and TV shows were still syndicated on TV, and for the chance to meet Roy and Dale if they happened to drop by. But time passes, heroes fade and fans travel less. Roy died in 1998 and Dale Evans in 2001. In 2003 Roy Rogers Jr. (Dusty Rogers) moved the entire museum to Branson, Missouri in search of an elusive fan base that continued to diminish, and the museum closed for good in December of 2009.

Roy's fans who watched him in Saturday Matinees in the 1930s and 40s are now in their 70s and 80s. This included most boys in America, a huge fan base, but not that many are left who still watch the old movies. I was part of the second wave who caught westerns on TV in the early 1950s and watched first run all the spin-off TV westerns of that decade -- The Roy Rogers Show, Hopalong Cassidy, Gene Autry, Annie Oakley, The Range Rider, Buffalo Bill Jr., Kit Carson and more. These TV shows were exactly like the B-westerns with clear heroes, villains, fights, chases and gun play. By the late 1950s "adult" westerns like Bonanza and Gunsmoke began to take over the airwaves. 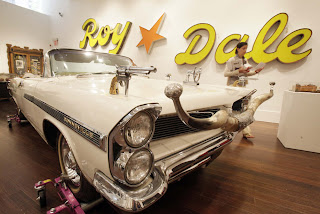 In 1988 Roy and Dale hosted a series called "Happy Trails Theater," which I believe appeared on Los Angeles TV. They introduced and discussed each film, often with guests like Iron Eyes Cody, Eddie Dean and son Dusty. Then they showed one of Roy's classic westerns. Many of these were issued on DVD by Goodtimes Video and are available from Netflix. Watch them all, but especially get Bells of Coronado because Roy's guests are Gene Autry and Pat Buttram. Gene and Roy discuss how they got their horses. The 1950 film itself is in Trucolor, features Dale and Pat Brady and is directed by top Republic action man William Witney.

Roy Rogers' features and TV shows are still very accessible on DVD, the Internet or Café Roxy programs and just as much fun as they ever were ... if and when young viewers take a chance and watch one. I will keep pitching them to TV stations and movie theater revivals. So Adios, Roy and Dale, you will never be forgotten!

Visit my website at Festival Films
Posted by Ron Hall at 7:50 AM