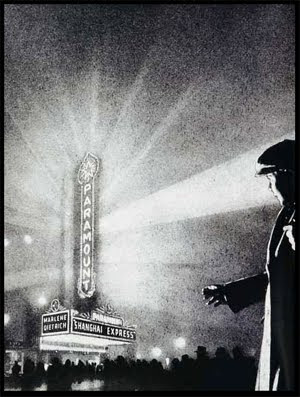 Before I get to Mr. Robert Benchley, here's an inspiring picture someone posted on my Facebook group this week that harks back to the golden era of movie palaces and theater going in the 1930s. I have seen similar old drawings that glorify the Paramount Theater, some of the interiors of palaces, and have always been moved by the nostalgia they evoke for an era I never really knew.
Ah, the thrill and expectation of seeing Marlene Dietrich first run with a full house.  I know it's a thinly disguised ad for Paramount theaters and pictures, but so what?
I have quite a few films I can never find -- piles and piles of DVDs everywhere -- and other gems I have yet to watch.  I don't know they are gems until I actually find the time to watch them but the discovery is always worth it.  Last night I got around to looking at a most interesting film sent to me last year by the real hero of this find, Derek Myers.

Derek has kind of a dream job and dream hobby to my mind.  He has programmed public domain films at WGGS-TV in Greenville, SC, and for a sister station in Atlanta for close to twenty years.  His continuing hobby is acquiring 16mm film prints of public domain films from ebay and private collectors and making new transfers.

The rare film that I had never heard of before is "I'm a Civilian Here Myself" produced by the U.S. Navy in 1945.  When World War-II ended all servicemen were brought home, but before they could step off the ship back into civilian life they had to enter separation centers for a few days.  This instructional film was probably shown to them on the ship home!

The Navy had a similar film for sailors out at the same time: "The Road to Home" in which Bing Crosby and Bob Hope told sailors not to jump ship.  While we would not think of it today, apparently there was a real problem with returning servicemen feeling they had served, the war was over and they could go AWOL right off the boat.  Bing and Bob entreated them to wait a few more days for their official discharge. I have sold this rare and highly entertaining short for some years in "On the Road With Bing and Bob" DVD.

Highly entertaining best describes "I'm a Civilian Here Myself."  In fact it is an absolute must-see film for fans of Robert Benchley, the reason being that he must have written most of it and plays many parts!  The film was made in 1945 and Benchley died in November of that year at the young age of 56.  It is probable he wrote his own dialog in one of his last films "Road to Utopia" released in 1946, but this Navy film may be the last free-wheeling, no-insanity-barred excursion into Benchley mania.  You can judge for yourself when he tries to explain to Hugh Beaumont his job before the war as a putty patterer.  The depiction of the separation centers as posh resorts with girls, girls, girls all in swimsuits could only have come from his mind as well.

The actual film runs 24 minutes.  The main title was missing so I labeled it: "Going Back to Civilian Life."  (I only just now found the correct title at IMDB under Hugh Beaumont, since there was no reference to the film under Robert Benchley.)  Because of the time limitation set by Youtube, only nine minutes of the film is presented here for your enjoyment.


Visit my website www.fesfilms.com.
Posted by Ron Hall at 9:42 AM