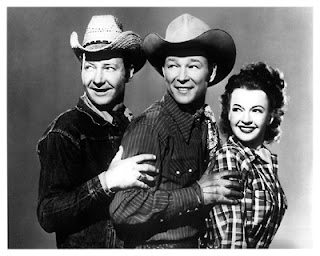 In a follow up to last week's post, I offer some comments on the curious case of Pat Brady. From their first meeting in 1935 when Pat was only 21, up until Pat's early death in 1972 at the age of 57, Pat and Roy Rogers enjoyed a lifetime friendship while working together many times.  Pat appeared in 36 Roy Rogers features from 1941's Red River Valley until the last Rogers feature in 1951, Pals of the Golden West.

The curious part of these screen appearances is that Pat's roles alternated from unbilled extra as a member of the Sons of the Pioneers singing group, to second sidekick, to #1 sidekick, but not in ascending order.  One would expect him to move up to the #1 job and keep it, but he had a bigger role in Red River Valley with lines and musical  numbers than as a border patrolman in Pals of the Golden West, where Pinky Lee filled the comic relief.  Pat does ride to the rescue with the "Roy Rogers Riders" while Roy and Pinky hold off the bad guys.

Born in 1914, Pat Brady first set foot on-stage at the age of four, in a road-show production of Mrs. Wiggs of the Cabbage Patch.  From that moment he was hooked on showbiz for life. While appearing as a bass guitarist in California in 1935, Pat struck up a friendship with a young country western singer named Leonard Slye, a member of the popular The Sons of the Pioneers. When Len Slye was elevated to screen stardom as Roy Rogers, he recommended Brady as his replacement in "The Sons." However, since Bob Nolan, an original member of The Sons, was referred to as "Bob," the group thought one "Bob" was enough, so "Bob Brady" became "Pat Brady" from then on.

As a member of the Sons of the Pioneers, Pat appeared in 27 Charles Starrett westerns from 1937 to 1941.  I have seen none of these even though I taped many Starretts off the western channel about ten years ago.  Then the Sons moved up to Republic to rejoin Roy, who had been an original member.  Pat stayed on when Foy Willing and his Riders of the Purple Sage replaced the Sons.  Pat's character was sometimes called Sparrow Biffle and other times he was not even billed in the credits! 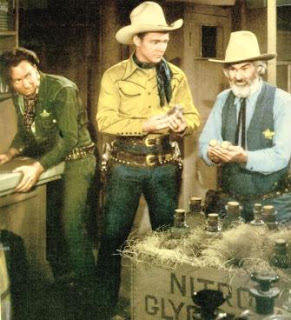 In Roy's 1942 film that was titled "Sons of the Pioneers," Pat Brady and Gabby Hayes get equal screen time as "dual sidekicks," as shown in the picture on the left.  They appear in every scene together as pals and best friends of Roy.  In a charming scene they ride together at night believing that Roy has been killed, singing a mournful song.  When Roy yodels the song in the distance Pat screams "It's a ghost!" and they hightail it. They shared the comedy in at least two other Rogers westerns of the period, and seemed comfortable doing so.

In King of the Cowboys (1943) Pat sings a comic song with The Sons, just before Roy rides off on an undercover job with sidekick Smiley Burnett!  That's it for Pat until he rides as an extra in the finale.

In Bells of Coronado (color, 1950), Pat is billed third and is Roy's one and only sidekick -- riding, fighting, getting shot and providing comedy.  But in Trigger Jr. (1950), Pat is again a comedy co-star with sidekick Gordon Jones.

In 1951's South of Caliente Pat has little screen time opposite burlesque comic Pinky Lee (who went on to a career as TV kid show host in the 1950s).  It is fortunate for Pat's dignity that he was not asked to dress up like a gypsy or take pratfalls like Pinky was made to do.  The fact seems to be that Pat was by then part of Roy's stock company and performed whatever the script asked of him, sometimes a lot but other times little. 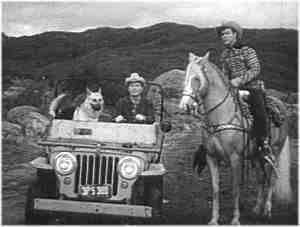 His loyalty and flair for comedy paid off.  When Roy moved to television from 1951 to 1957 he took Pat with him, now permanently billed as "himself" or as The Roy Rogers Show put it: "...and Pat Brady, Roy's comical sidekick."  Brady enlivened over 100 episodes, happily driving about the sagebrush at the wheel of his faithful jeep "Nellybelle."  Nelly was Roy's jeep that he used on his ranch.  He had noticed that kids expressed extra interest in the vehicle whenever they saw him driving around, so he ran the idea past Pat as his transportation in the TV show rather than riding a horse.  The idea was a hit with Pat, who reveled in the comedy antics of the cantankerous prop, as was the entire show.
The Roy Rogers Show is where I first heard the term "sidekick" at an early age and where I first met Pat Brady.  I had no idea Pat appeared in so many features with Roy ... 36 ... until today when I added them up!

Visit my website www.fesfilms.com.
Posted by Ron Hall at 11:02 AM