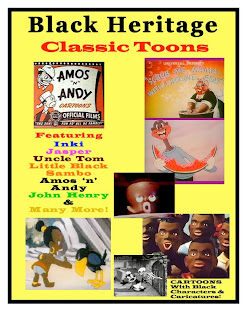 So we are half way through Black History month, which comes up every February for years now, and I finally have my act together with new programs that are longer, better, better, more enjoyable and can be advertised with a fresh poster for each showing. All the African-American or Black Heritage films I have in the public domain are listed HERE, but more useful are the Black Posters for Programs.

I prepared the posters and programs for use by Toon-Whiz Pictures whose infant website has rapidly evolved since yesterday. I made the "Lotsa Laffs!" poster for them last night, and just discovered they will use that program in their new venue in Oakland's Durant Square area. The idea, briefly as I understand it, is a storefront in a tourist district with a film viewing area for public domain films, which will either be the all-comedy clips show or Black Cinema shows. Admission is free so they do not have to qualify as a "Theater" and revenue will come through sales of concessions and merchandise.  Much more about Toon-Whiz in the near future.

Here is a description of the Black Programs created so far.

BLACK CARTOON SHOW
Includes mostly Hollywood cartoons that contain black characters like Inki, Jasper, John Henry, and some of which have caricatures that were common at the time and might be offensive to a few today, though I feel society has moved beyond complaining about past wrongs and history should not be changed. 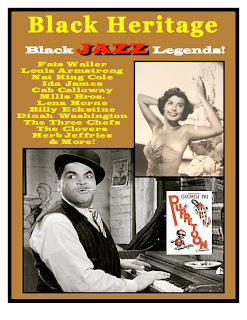 PAUL ROBESON IN "THE EMPEROR JONES" (1933)
With Bessie Smith in her only film "St. Louis Blues" (1929) and the 1931 Warners cartoon "Hittin' the Trail for Hallelujah Land," that includes Uncle Tom in a graveyard.

Visit my website at Festival Films
Posted by Ron Hall at 1:34 PM No comments: