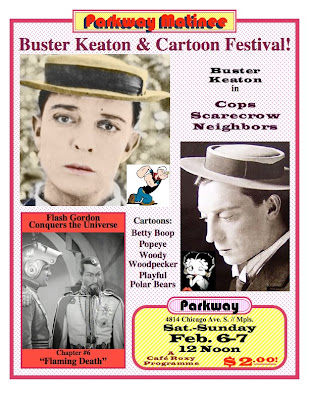 I am convinced that any audience will love Buster Keaton, spread the word and come back for more. In my college years, as I recall, I only happened to see the great man in COPS and BALLOONATICS and possibly SHERLOCK JR. at the U Film Society. Of course Keaton was still alive and active at the time and I had noticed him earlier on "Candid Camera" doing embarrassing stunts at a lunch counter while they filmed customer reactions. I also saw THE GENERAL at an early age but don't really remember the circumstances. It was around 1970 when Raymond Rohauer revived unseen gems like SEVEN CHANCES and all the Keaton silent features. These eventually made their way to video release by Kino on Video and sold many thousands.

The time is ripe to discover Buster anew, and this time with audiences in Café Roxy venues. Every episode of the All-Star Series (for lack of a better series name) contains one of Buster's silent comedy shorts made from 1920 to 1923. All are in the public domain and all are hilarious. 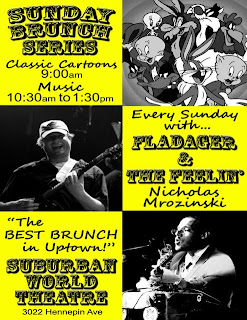 Locally, the Parkway Theater is showing a Buster Keaton Festival today and Sunday as part of their Matinee series. Silent shorts were never part of the Saturday Matinee experience, but who cares? It will be a terrific show with 4 cartoons and Flash Gordon serial. See the poster for details. All the details you need are that the 3 Keaton shorts are NEIGHBORS, THE SCARECROW and COPS.

A surprising development over at the Suburban World Theater is that they brought in a band to play every Sunday from 11 am to 2 pm. Cartoons run from 9 to 11, and then run silent behind the band. Music for movies is a natural. Remember silent movies? The band does and is excited to try playing for Buster Keaton in an unannounced trial run this Sunday. The short will come on with a Felix the Cat cartoon and the band will shift their music to accompany the films. If this turns into a weekly event they will add it to their poster. The current poster is shown here.

I have considered making Keaton wallpaper DVDs that only contain two shorts each that then repeat on the disc. That way a venue that finds success with the concept can obtain 10 different shows. They can advertise Buster Keaton night every Thursday, or whatever/whenever. A diner or bar patron may not stay longer than 40 minutes so he can catch the entire short that he happened to walk into the middle of. 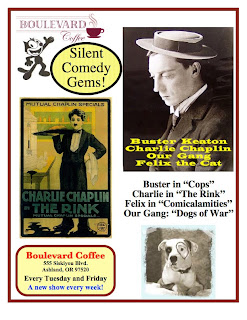 I am also expanding programs of silent comedy shorts. The general public has a vague notion that silent comedy is funny and they can't easily find it elsewhere. Therefore they are likely to give it a try, or warm to the films if they walk in cold and find them playing. Meanwhile, anyone not interested will not be put out by silent films playing on large-screen TVs. The poster for a proposed showing in Oregon is a sample they will test soon. It is not yet a show that has played. Looks like a winner to me!

-- Ron Hall
ron@caferoxy.com
See all the Roxy programs at www.caferoxy.com
Posted by Ron Hall at 11:48 AM No comments: 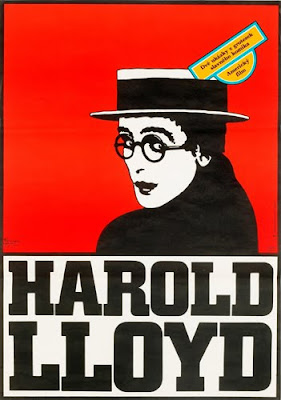 After weekly posts for 8 months, I fell out of the habit. Nothing wrong here, except I have been a Minnesota Vikings football fan for 40 years and they lost the big game again when they had it nearly wrapped up. I will remove this comment in a week, but in case any weekly readers have wondered what happened to me... my spirits have been down. Also been busy on a big project, and busy is always good.

I meant to talk about a hoped-for revival of interest in Buster Keaton. Maybe next time.

One love has always been silent comedy, especially Buster Keaton and watching him with an audience. I first experienced silent comedy with an audience in college at the University of Wisconsin. I recall a few showings of Laurel and Hardy silents with live organ accompaniment, outdoors as well at the student union. There was also a season where they showed Chaplin shorts during lunch in a community room, like every Wednesday or some special day of the week. The most memorable event was a screening of Robert Youngson's "When Comedy Was King" (or else it was "TheGolden Age of Comedy") in a packed classroom one evening. It was for the film history class but word got around that anyone could attend and it would be fun. No one present had seen this stuff before and they really got into it. The highlight was Laurel and Hardy's "Big Business" feud with Jimmy Finlayson -- a fall out of your chair and laugh till it hurts pandemonium. I saw later Robert Youngson compilations in movie theaters like Days of Thrills and Laughter and Four Clowns.

I also saw Harold Lloyd's World of Comedy in a theater when I was still in high school (double-featured with Jack the Giant Killer!) This pre-dates the above U. showing. Which reminds me that Harold came to the U. to test his second compilation "Funny Side of Life." I got to meet him and shake his hand at a reception. He was very thankful for the laughs at the screening and ate up reassurances that we enjoyed the show, which the audience did find hilarious. The IMDB lists "Funny Side" as a 1963 release but I am positive I saw it in college which would be after 1964. I would not have gotten invited to the reception if I was not in college. My guess is Harold made the film earlier but took it around to campuses in 1965.

From IMDB: With the success of his first compilation film, HAROLD LLOYD'S WORLD OF COMEDY (1962), it was only natural that a sequel would soon follow. It is important to remember that for decades these two films were the only way in which to enjoy Harold's classics, as he was adamant that they would not be butchered by television. 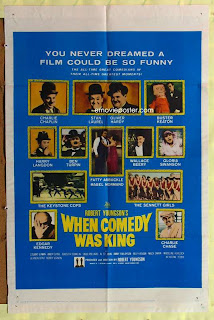 We are shown Harold's shipboard confrontation with the villain and a romantic interlude in the woods from THE KID BROTHER (1927). Harold's desperate dash to his own wedding while in charge of a group of drunken bums is shown from FOR HEAVEN'S SAKE (1926) and his taxi troubles in SPEEDY (1928) are included. As a grand conclusion, we are treated to Harold's THE FRESHMAN (1925) in its entirety. This wonderfully funny look at a determined young fellow's drive to succeed on his college football team is still touchingly poignant. The inclusion of the song ‘There Was a Boy, There Was A Girl' by Ned Washington & Walter Scharf lends a gentle, evocative touch to the movie.

Also present at the reception after the screening was movie pioneer Roy Aitken, one of the producers of "Birth of a Nation," who lived in Wisconsin and was in fact still alive (!) in his upper 90's.

From Wikipedia: "Triangle Film Corporation (a.k.a. Triangle Motion Picture Company) was a major American motion-picture studio, founded in the summer of 1915 in Culver City, California, and envisioned as a prestige studio based on the producing abilities of filmmakers D. W. Griffith, Thomas Ince and Mack Sennett. It was founded by Harry and Roy Aitken, two brothers from the Wisconsin farmlands who pioneered the studio system of Hollywood's Golden Age; Harry was also DW Griffith's partner at Reliance-Majestic Studios, who had also been fired by the Mutual Film Corporation as a result the aftermath of The Birth of a Nation's unexpected success that year, as the film also lead to riots in major northern cities due to its racial content."

I heard Harold say to Roy: "Mr. Aitken, I used to work for you when I first got into pictures, but I never got to meet you. This is a real pleasure for me." I left with the impression that Harold Lloyd was a humble and gracious man.

Visit the website at www.caferoxy.com
Posted by Ron Hall at 10:38 AM No comments: