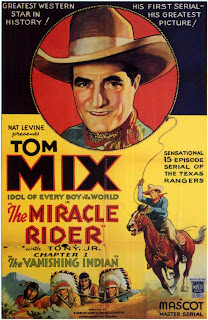 I woke up recently thinking about the most memorable movie moments in my life. They weren't necessarily the best movies, but ones that nonetheless stick in my head forever. In fact most of the happy memories from before I turned ten are about the movies I saw, good or bad.

At the top of the list would be the first movie I ever saw, or that I remember seeing, at the age of 5. It is impossible for anyone under 60 to recall their first movie ever because they would be watching TV before they could walk or talk. With no TV or movie theater experiences, I recall sitting on a park bench watching a serial in 1951 and being too scared to look at the screen when the Dead End Kids got killed at the end of each episode of Jr. G-Men. Chapter One ends with a fight on a runaway elevator that crashes; chapter two with them hiding in a building that blows up. They didn't even know there was a bomb inside, so how would they know to get out? Too intense for a first timer, I really thought they got killed at the end of every episode. I can recall other serials over the next 7 or 8 years of "Free Movies in the Park" in Deerfield, Wisconsin -- Lost City of the Jungle, Mystery of the Riverboat, Gang Busters -- but none had the impact of that first summer of thrills. 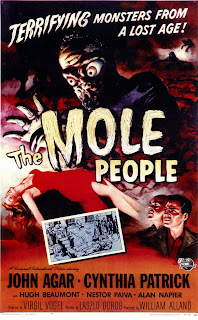 Just a year or two later the Tom Mix serial The Miracle Rider suddenly started showing on television late Sunday morning. It had a science-fiction element of a flying projectile in which Tom is stuck for one of the cliffhanger endings. I particularly recall an ending in which a gun is rigged to fire when Tom enters a room. This may have been the first serial I saw on TV, but the main reason it impressed was that it was on right after getting back from church! Boredom turned into excitement.

Those summer free movies in the park of course had features -- projected outdoors on 16mm and sometimes in the rain. I recall the occasional umbrellas more than most of the features: Francis the Talking Mule in the Haunted House, Destination Moon, The Deadly Mantis and particularly The Mole People, which may have been my first monster film. The familiar theme of an archeology expedition finding a lost civilization may have sparked an interest in our lost past and Atlantis that remains with me today.

When I was 8-years-old my mother dropped me off at a movie theater in Madison by myself to see a Tarzan double feature of Tarzan the Ape Man and Tarzan Escapes. It was intense at the time but mainly has been on my mind the last five years as I have researched Tarzan Escapes still looking for the lost Vampire Bats scene. For more on my quest, check out this earlier blog. The only development is that I will be getting a pressbook for the 1954 reissue of the film in a few days. I already know that it talks about the bats. 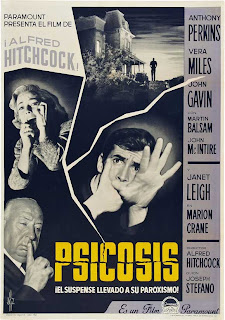 The most memorable movie experience of my entire life occurred when I was 14. You can imagine it took more thrills than giant bats to make such an impression. My mother again dropped me off at a theater in Madison. I remember standing in line to get a ticket for the sold out afternoon show, which must have been the first Saturday that it opened. The film -- PSYCHO. No one in the theater knew what was going to happen, and it sure happened. I had been primed by being a fan of Alfred Hitchcock Presents TV show. I couldn't tell you which if any Hitchcock features I had seen before, but none was like Psycho anyway. I recall where I was sitting in the middle of the theater surrounded by tension, totally at the mercy of the filmmaker. At the climax someone actually screamed at the screen: "Don't go in the basement!" She did.

I often ask people what movies they saw as kids that they remember most vividly. Try it. One gets strange and fascinating replies.


Visit my website at Festival Films.
Posted by Ron Hall at 9:09 AM