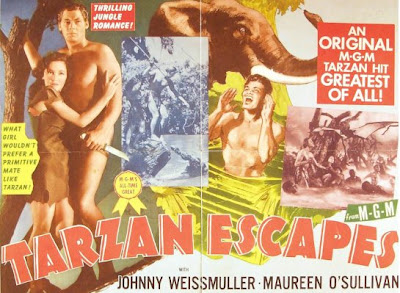 I have been fascinated, intrigued and obsessed with the film Tarzan Escapes since I was 8 years old when I first saw it in a movie theater as part of a double feature with the 1932 Johnny Weismuller film Tarzan the Ape Man. This was an official MGM theatrical release that played all over the country in 1954 and 1955. The films had not been reissued to theaters in years, if ever, and had of course not been released to television as yet. Tarzan Escapes was the third in the popular series with Johnny and Maureen O'Sullivan and their last solo film before Boy showed up. I don't know why the reissue bypassed Tarzan and His Mate, but that's what the double feature was. The poster shown above is from the 1954 reissue. The film could also be booked separately by theaters and was likely available for matinee bookings over the next ten years or as long as MGM kept prints of popular films in regional film depots.

I had never seen a Tarzan film before. I am not sure I had even seen a horror film of any kind before since my parents did not allow it. I was just old enough in those innocent but safe days to be dropped off by myself at a matinee showing in Madison, Wisconsin. So what's the big deal you might be wondering? Those are good adventure films but have been out on video for years. Not true! I saw a version of Tarzan Escapes that has never surfaced on video, a virtual lost film since the theater showings in the 1950s. Of course I did not know it at the time. I had never read about the films. I can't recall what I knew about Tarzan other than the newspaper ad for the double feature that sounded exciting. My parents let me go. By myself. It must have sounded like safe kiddie fare for a quarter.

The Tarzan Escapes print differed in several ways from what exists today. I am certain that it included the same lion fight that was lifted from Tarzan the Ape Man because I noticed (for the first time in my life) the use of stock footage. In the surviving copy Jane sends Tarzan out to get food. He kills a Gnu, hacks off meat and takes to the trees ahead of a lion, but in what I saw he grapples with and kills not one but two lions. It was an intense and scary scene that I had never seen the likes of before, and yet I saw it twice that day, once in each Tarzan film. I recreated this scene a few years ago and you can watch it on Youtube here!

There is a second scene that I think I saw that is totally missing today. After Tarzan is caged by the bad hunter who wants to take him back to civilization to exhibit him as a freak, he is carried away by natives from the hunter's safari. The hunter is taking Jane back with him and so naturally needs to hide Tarzan's capture from her. The missing scene is when the safari natives with Tarzan are surprised and slaughtered by the really, really bad natives who then set out to carry Tarzan back to their village. If you watch the film today you might notice this gap, or you might think that when Tarzan escapes by rolling his cage down a steep embankment that he had escaped the hunter's natives. Both the lion fight and this scene were cut after complaints of too much violence during preview showings in 1936. The real missing scene that gave me nightmares as a child and that no one has seen since is THE ENTIRE CLIMAX OF THE FILM! You can see what surrounds the missing scene here! The escaping safari enters a forbidden juju cave. Look closely and you can count about 40 natives going in the cave but only 10 emerging safely from the other end. They were killed by giant vampire bats! These bats were so large that they could scoop up natives in their talons and fly off with them. That is the shot that reportedly sent kids screaming in terror from theaters during the 1936 previews, and alarmed mothers who protested.

New and sanitized prints were quickly made up for the 1936 release, but many reviews around the country indicate the uncensored prints with the bats were also shown, and it was this negative that was chosen in 1954 to strike the new 35mm safety prints that went out. Unfortunately, the cut version was later used for all subsequent restorations and videos. You can read much more about my experience and memories at I Saw the Giant Vampire Bats.

Tarzan Escapes was an even more troubled film than having its climax cut at the last minute. It was first filmed in 1935 but the film turned out so bad that MGM could not release it. Instead, they completely re-wrote it, added actors and re-shot for a 1936 release. The only thing they kept was the attack of the vampire bats. And then they cut that! Many stills and lobby cards survive that show scenes from the scrapped 1935 film, scenes that are not in the present film. One basic change is that in the lost 1935 film Tarzan and Jane lived in a cave, while for the "remake" they built that elaborate tree house. The 1935 film had Great Apes (men in ape costumes) like those in both Tarzan the Ape Man and Tarzan and His Mate, while the 1936 film had none.

Go read my article for more details. Since I wrote that article a few seconds have surfaced from the 1935 film. Alas, not a single frame of a bat flying! The few seconds show Jane with a Great Ape. This is part of a 1935 MGM promotional reel made for France. It includes Laurel and Hardy and Jimmy Finlayson and can be seen here. The promo reel was obviously made some months before the intended 1935 release of Tarzan Escapes, a release that never happened of the original film. Also made well in advance is a 1935 trailer for the film that mentions the bats although, again, no actual frames of them attacking are shown. This fascinating trailer is at the head of the promo reel. 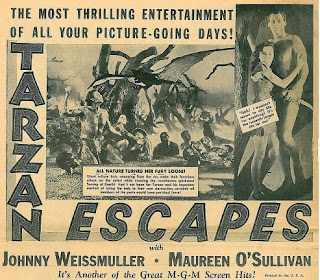 Hey, everybody, the vampire bat footage might still exist! It could have been included in foreign versions of the film sent to Europe or South America in 1936, and could survive in foreign archives. The bats could survive if any of the 1954 prints on safety film found their way into private collections. A more modest goal is to talk to anyone else who saw the bats in a theater in the mid 1950s. While I am certain I did see Tarzan and his natives fighting those giant bats in the swamp, I do not recall how they escaped. Did a tribe of pygmies carrying torches enter and scare off the bats? That is in the original script for the 1935 film, but no pygmies are in the surviving 1936 film.

And so the quest goes on!

Visit my website at Festival Films.
Posted by Ron Hall at 8:13 AM