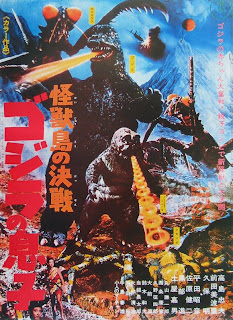 In July I filled an order for the "12 Nights of Horror" and took the opportunity to spiff-up each program. This mainly entailed modulating the volume levels so the sound doesn't jump between shorts or the shorts and features. I also added a few trailers I had acquired that promoted the show next week. The 12 nights should be run in order because of the serial chapters. When I later created the 3 Saturday Matinee series I either found or made trailers for each upcoming show, which is why I now had a trailer for Vampire Bat to add into the horrors.

In August I took the same revision approach before filling an order for 12 "Turkeys in Space." Since this series was put together later the sound did not need adjusting and I only re-did 4 of the programs. Several of them included 7-8 minute segments I called "Godzillathons." These were trailers for the many Japanese Godzilla movies -- in Japanese with the colorful Japanese lettering onscreen. It didn't matter that you can't understand the voice over narration. All the plots are the same -- Godzilla, other monsters, big fights & mayhem! However, I had initially inserted two Godzillathons in one of the shows and now felt 15 minutes of Godzilla was too much in one sitting. 8 minutes = fun; 15 minutes = deja vu.

This past week a satisfied customer in Wisconsin ordered three more shows for their small movie theater. Whenever I get orders for theaters I "Roxify" the features into programs. This means adding an opening Roxy montage that runs 16 seconds to the tune of the Universal Pictures 1930s music as the airplane circles the globe. I also add a closing montage that says "This Concludes Our Show" and has about 5 minutes of exit music. Mainly I add trailers, shorts or cartoons like an old-time movie show. Then I make a poster. 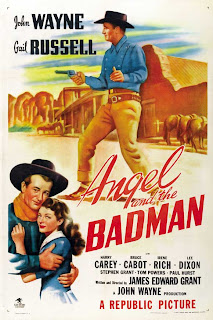 The first show they requested was The Angel and the Badman, which is certainly one of my top-ten favorite John Wayne films because of the presence of Harry Carey, stunt work by Yakima Canutt, a superb story and lovely Gail Russell. This is not a plug for the remake which opens next month and that I likely won't see until Netflix has it in March or so. The film runs 95 minutes, so not much room for extras on the disc. I added the western-themed cartoon The Mild West, a color Paramount "Screen Song" from 1947, and a trailer for Roy Rogers' "King of the Cowboys." In retrospect, I should have looked for a trailer to Stagecoach or some other John Wayne.

I already had the full one-sheet poster shown here on my website to advertise Angel and the Badman, and I did not alter it to say "Plus Cartoon." The posters serve two purposes: 1) To sell the film or program to my customer, and 2) For the buyer to download, print out or post on their own websites. 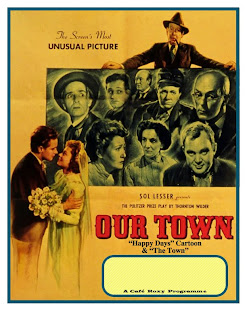 This is the second time I have sold Our Town (1940) this year to a movie theater that commented: "We are a small town, and we thought people would like to see the film." I heartily agree! Thornton Wilder wrote the screenplay after his celebrated broadway hit. Change comes slowly to a small New Hampshire town in the early 20th century. People grow up, get married, live, and die. Milk and the newspaper get delivered every morning, and nobody locks their front doors.

The program was already Roxified by the addition of two shorts. Happy Days is a 1936 UB Iwerks cartoon set in a small town: A group of boys plan to go fishing. They don't want Pinhead to come along, but he's the only one able to find any worms for bait. On the way to the fishing hole, the other boys bully Pinhead into chipping in to buy a used car. When Pinhead fills the car's tires with air, it begins floating. The boys finally land in the fishing hole, where Pinhead catches a fish.

The second twelve-minute short is called simply "The Town," a documentary look at Madison, Indiana, directed by the same Josef von Sternberg who made The Blue Angel and 6 other early Marlene Dietrich classics. I'm not sure why he made this film, but I recall it had something to do with the war effort to show soldiers the American values and home towns they were fighting for. 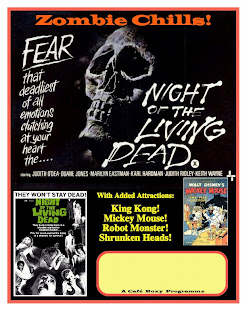 Finally, for Halloween they wanted The Night of the Living Dead, a great choice since it still shocks. I remind every buyer that there is one long shot of a nude female zombie. No one has ever asked for a censored version, though it would be easy to make. I just noticed the film was rated "X" when it came out, which must have been for zombie-bashing violence that looks tame today, and that one nude shot. There is no suggested sex in the film; too busy fighting zombies. I had a program for this already made up that included a trailer to White Zombie and the cartoons The Mad Doctor and The Magic Mummy, but this show was misfiled. When I didn't find it at once I remade the whole thing and feel the new version is a tad more fun with two trailers and one cartoon.

The first trailer is for the infamous turkey Robot Monster. It's campy and quite funny, both the feature and the trailer. The second trailer is for the classic King Kong and is loaded with action and the great music score. I also added a TV ad for a Shrunken Heads toy kit. Turn out heads in a mold, paint and add hair and the next they have shrunk down. Today it feels like a ghastly pastime for kids and so is pretty funny. The Mad Doctor is the only Mickey Mouse cartoon that was never renewed. Why? Possibly it proved too intense for young audiences and was shelved and forgotten. The sight today of a madman trying to cut out Pluto's heart may upset young viewers, who should not be allowed to see Night of the Living Dead anyways!

Visit my website at Festival Films.
Posted by Ron Hall at 9:44 AM