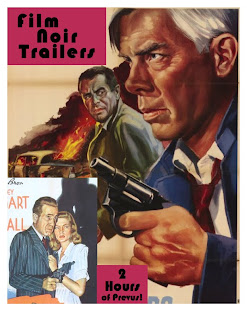 Over the years coming attraction prevus or "Trailers" have done more to bring audiences back every week than movie posters. As evidence I give you television today. You even need to watch the ads so you don't miss a few seconds glance at next week's explosion or face-off on "24," or you need to sit thru the credits to watch a gag set-up for the next episode of "Entourage." You may leave a movie theater talking about all the terrible movies that are coming soon, and yet you enjoyed seeing two minutes of them now so you don't waste a second on them next winter. Then a year later some image may have lingered enough for you to get the film from Netflix or start watching it on cable. Or not. My memory of Transformers trailer is enough to keep me from ever watching it.

Unlike commercials, Trailers are ads you want to see. I don't need to describe what trailers are. Everyone knows! Their promotional value is beyond question, so what's new with trailers and me? Thanks for asking. A couple of things.

In a conversation with a new movie theater who bought the 12-part horror series and "Turkeys in Space," the owner commented that he planned to promote them all of August before running them in the fall, and he planned to run promos on 3 TV monitors in the lobby that ran continuously. I said many of the programs included trailers for the next week's show and he could pull clips off that. On second thought, why should he need to do that work? I put them together myself and included these trailers on a separate DVD that runs 28 minutes: Phantom Creeps, Dementia 13, Carnival of Souls, House on Haunted Hill, Little Shop of Horrors, Gypped in Egypt cartoon clip, White Zombie, Brain That Wouldn't Die, Giant Gila Monster, Teenagers from Outer Space, Ghosts on the Loose, Vampire Bat, Horror Express. The last two were trailers that I made up for the Matinee Series from key scenes and "Coming Soon" wording. 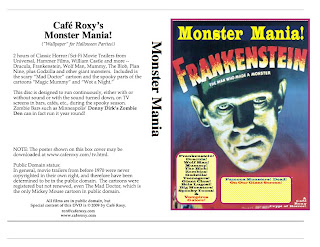 28 minutes is just a scratch on all the trailers I do have or have made for public domain films. Why stop there? Why not give away with every request for the Roxy Sampler Show a second disc which is two hours of trailers? Consider it done, or as soon as I put it together. This disc can serve multiple purposes. First, my buyers can see what is available and what looks exciting or funny to them. Second, they can run trailers as part of the pre-show or in the lobby. In the case of bars and cafes, trailers are wonderful filler to run all the time, either with or without the sound turned up.

This ties in with another email I got last week that asked: "We would like to put a series of grindhouse/horror/b-films together. Do you also have any trailer compilations?" The answer to that is yes, but I haven't been advertising them other than the Horror Mania poster and program shown here. I have an excellent collection of Film Noir trailers from Crossfire to Sealed Lips to Kiss Me Deadly, and since I made a poster for them today, I am now in the business of selling that DVD. Visit the new Trailer Page. 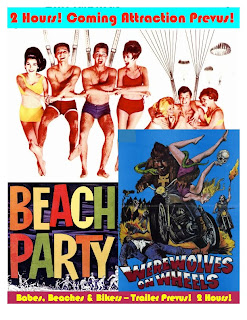 I have three DVDs I call "Trashy Drive-In Prevus" and can sell them soon as I make a poster and put on the website. After that it's a matter of coming up with themed ideas such as "Babes, Beaches and Bikers." The poster is finished and will go on the website shortly. I have the trailers but don't need to put them all together until I get my first order.

Remember that if the poster can sell a program to YOU, you can put the same poster on your website to sell the show to your customers. "Sell" in this case means getting them to watch and enjoy, because if it's only trailers you better give them away. It's your best way to learn which films they would pay $2 bucks to come see.


Visit my website at Festival Films.
Posted by Ron Hall at 9:21 AM