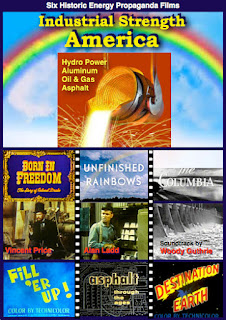 Partners Bob Campbell, Derek Myers and myself launched the Lost & Rare Film and TV Treasures series in 2013 with 4 releases: Lost TV Pilots, Sports Immortals, Golf Mania and Heavenly Christmas Film Classics. Each contained films which were truly rare, not out on youtube or DVD, and were often unknown to even the most ardent film fans. Finding such "Lost" films and organizing them thematically is quite exciting, but we don't find them every day!

"Industrial Strength America" contains 6 historic energy propaganda films (listed below) from the 1940s and 1950s. Regardless of one's opinion on fracking or oil pipelines today, 70 years ago few opposed the extraction or use of petroleum, aluminum and other natural resources since the products greatly increased our quality of life and the industries created jobs that built a great nation. Hundreds of such films were made and are called "Industrial Films" since industries produced them to promote good will in their products. They can also be called "public service" films since they educated the public and were distributed freely (and maybe for free) to schools and movie theaters.

5 are in color and all 6 are filmed to Hollywood standards. Born in Freedom (1954) tells an entertaining story about the first oil well and stars Vincent Price, with Andy Clyde and Alan Hale Jr. in prominent roles. Unfinished Rainbows features Alan Ladd in his first credited screen role, and in color no less. (B-western fans might spot villain Charles King in a late scene.) Fill 'Er Up and Destination Earth are superbly animated Technicolor cartoons by Carl Urbano -- Earth is quite funny and Fill 'Er Up by the future director of The Jetsons has a good share of jokes as well. Asphalt Through the Ages and The Columbia are more traditional documentaries, except The Columbia soundtrack is by folk legend Woody Guthrie who sings three original songs.

We feel we truly have a release that will appeal to film fans, history buffs, schools and library patrons. Our main marketing will be to libraries. Here is more information on the six films. 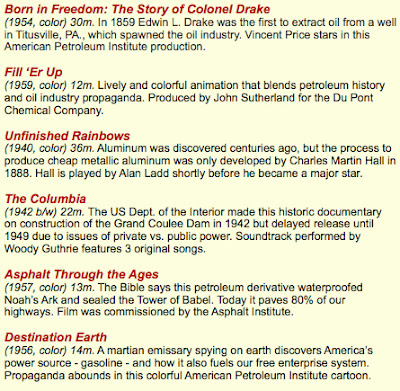 Here are some preview scenes from each of the 6 "Lost and Rare" films that are lost no more:

"Industrial Strength America" DVD is available now for $19.95 from Festival Films. Visit the Lost & Rare website to order and for more information on all our releases.
Posted by Ron Hall at 11:54 AM