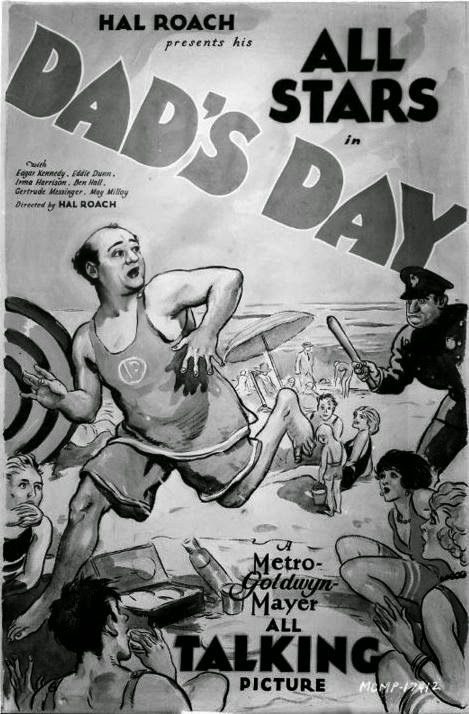 We have proposed to Turner Classic Movies that they present an EDGAR KENNEDY DAY Tribute, featuring Edgar biographer Bill Cassara as co-host. The response from TCM was extremely encouraging, concluding with "I do think there’s a very good chance we can make this happen." No date has been set and "Edgar Day on TCM" is not assured, but it seems highly likely. TCM often holds such tributes on a star's birthday, and Edgar's birthday was ... last week! So look forward to April 29, 2016 (a Tuesday) to see 12 hours of Edgar on TCM.
TCM can include in the tribute classic Hal Roach shorts with Edgar plus features already in their library like San Francisco, Duck Soup, A Star is Born, Unfaithfully Yours and My Dream is Yours with Doris Day.
To flesh out an Edgar Day tribute, we are offering TCM 8 of Edgar's best RKO shorts and several feature films that are not in TCM's library. FLIRTING WITH DANGER (1934) is one Edgar feature we are offering TCM. Three brash and cocky TNT powder mixers -- Robert Armstrong, Edgar Kennedy and William Cagney -- are sent to South America to work at a dynamite plant. This scene shows Edgar mixing a powder batch while his fellow TNT cohorts are busy romancing.

You can help make TCM Edgar Day happen by posting Likes and Comments to Edgar's Facebook page to show TCM your enthusiasm, Like Edgar on Facebook and invite your friends to do the same: https://www.facebook.com/edgarkennedyshow.

Hal Roach friend, collector and expert Richard Bann presented a program of rare Roach shorts at the final Syracuse Cinefest #35 in March. The excited and large audience was treated to 3 Edgar shorts that none of us had seen before. First was the Spanish language version of the Our Gang comedy "When the Wind Blows" (1930). In the early sound era Roach filmed many of the Laurel and Hardy and Our Gangs in French, Spanish and Italian versions for the foreign markets. Jackie Cooper, Mary Anne Jackson, Wheezer and the other kids actually spoke Spanish one line at a time without knowing what they were saying. The most convincing and very funny Spanish delivery was by Edgar as Kennedy the Cop as he tromps through a dark and windy night trying to catch burglars.

"Crazy Feet" (1929) is an early Charley Chase talkie that only recently had its sound track restored to the picture. When Thelma Todd is struggling with Eddie Dunn in her car, Charley comes to help her. Kennedy the Cop shows up and mistakes Charley for the trouble maker, so Edgar shadows Charley the rest of the film as he tries out various vaudeville acts with Thelma.

"Dad's Day" was a 1929 Roach All-Star film starring Edgar as a beleaguered father with a teenage daughter and son and their boyfriend and girlfriend. The whole family goes to the beach for the day, but still no respect for poor dad as he loses his bathing suit among other trials. Charlie Hall supervises the changing room and gets to call Edgar "Baldie." The plot is like a pilot film for Edgar's RKO Average Man series, except the family dynamic lacks chemistry. Roach liked Edgar and proposed a Kennedy series to MGM, but their theaters said viewers did not want Edgar. How wrong they were! So Roach started a Harry Langdon series instead, Edgar moved to RKO under Harry Sweet's guidance and the rest is history.

Laurel and Hardy's little nemesis, Charlie Hall, appeared in cameo roles in 12 of Edgar's RKO shorts, including our recent acquisition "Slightly at Sea" (1940). This is one of the mid-series films with Vivien Oakland as Edgar's wife and short Bill Franey as his father-in-law. Jack Rice plays brother-in-Law in what may be his only film as Franey's son. The series truly tried every combination and this plot required Brother. The funniest gag with Charlie Hall. The joy the two veteran's show playing against each other is clearly evident. 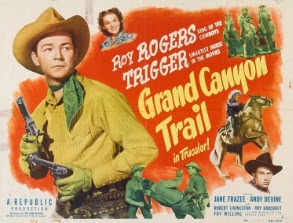 Changing subjects drastically to the Roy Rogers 1948 Trucolor western Grand Canyon Trail... Although the film is in the public domain like more than 60 of Roy's Republic westerns, I had never gotten a decent copy before and so had never watched the film or sold it. It was shot and first shown in Trucolor, which is similar to Cinecolor withou a true blue. However, when Republic released the roy's to TV in the 1950s they only issued it in black and white and DESTROYED all of the color elements, so it is no longer thought to exist in color.

A big surprise in Grand Canyon Trail is the appearance of Jimmy Finlayson as a sheriff in his last scripted and credited comic role. Fin only shows up in the last 8 minutes but zings in some funny one-liners and has comic business with sets of hand cuffs.