Gospel Films Archive - Off and Running!

Gospel Films Archive: a project to restore the films and TV shows that spread the Gospel to 20th century audiences and reissue them in historical context Gospel Films Archive has made major jumps this year, with great help from my partners Bob Campbell and Derek Myers. The biggest news is that we have a DVD distributor -- Vision Video -- the largest, most respected seller of Christian videos for 40 years.  Gateway Films/Vision Video produced "The Cross and The Switchblade" with Pat Boone way back in 1970.  VV has an extensive website, printed catalog and many thousands of followers. An  artist designed the professional boxes as you can see.  VV is also producing the DVDs and boxes, promoting them along with their other catalog films and filling orders.

We don't need to search for the audience that Vision Video has built up for years.  Our future role will be to acquire more films for the Archive, restore them as needed and program them into thematic DVD packages.  We are planning two or three Christmas releases now of rarely seen shorts and TV shows.

The first five DVD collections of vintage Gospel films (1940s thru 1960s) have already been released! 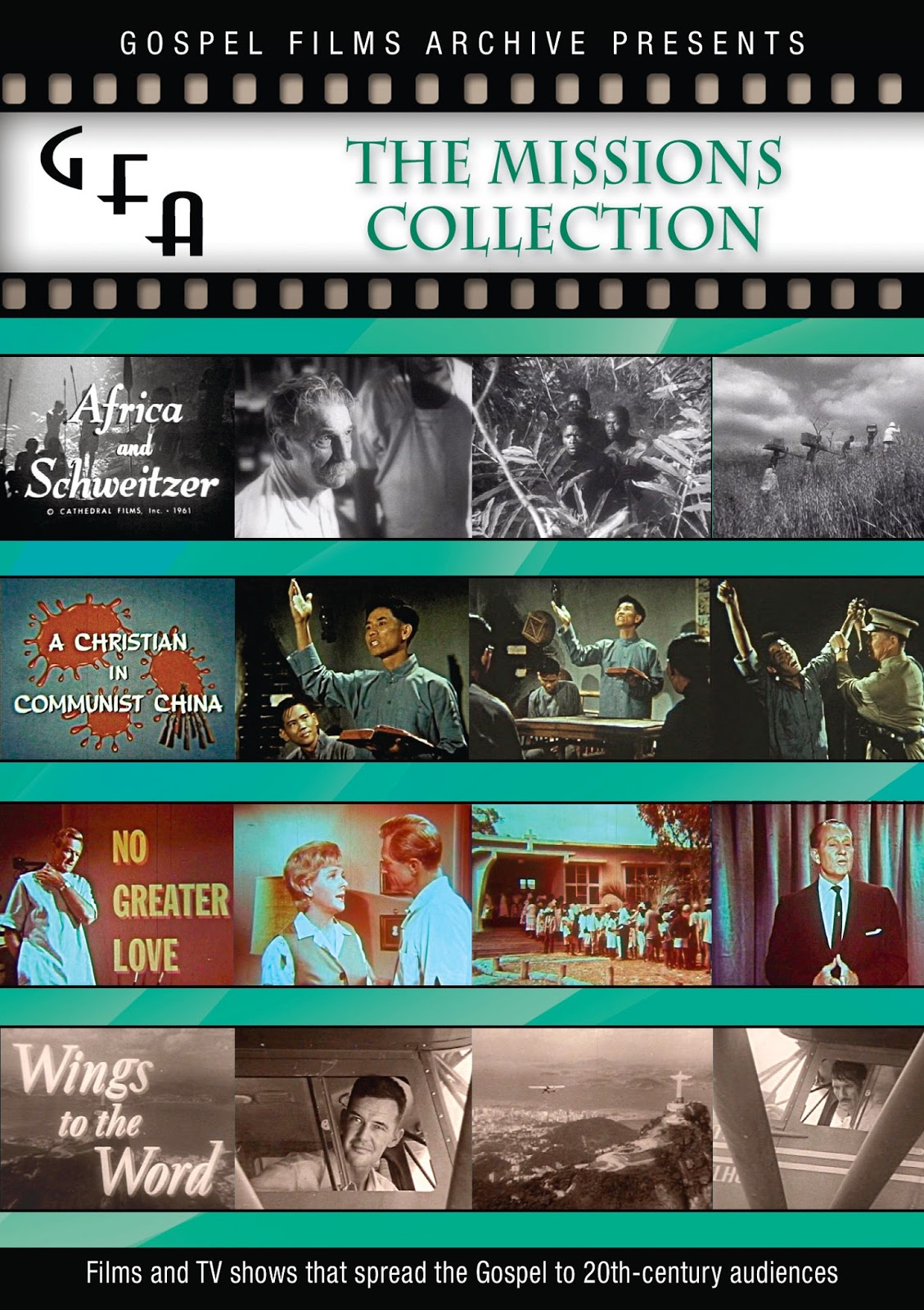 First is The Missions Collection with four rare films concerning Christian missionary work in the mid-20th century.  Africa and Schweitzer is a rarely-seen, excellent documentary made while Albert Schweitzer was still alive. Narrated by Lowell Thomas and photographed by Ingmar Bergman's cameraman, Sven Nyquist, it gives a revealing look at the great humanitarian.  A Christian in Communist China dramatizes a 1960 story that is just as timely today - the difficulty of preaching the Gospel inside China.  No Greater Love is about a dentist volunteering service in India against his wife's wishes.  It stars TV detective Richard Denning and his wife, 1940s film star Evelyn Ankers, in her last film.  Wings to the Word is a documentary about a young minister in Brazil who flies his airplane to spread the word of God. 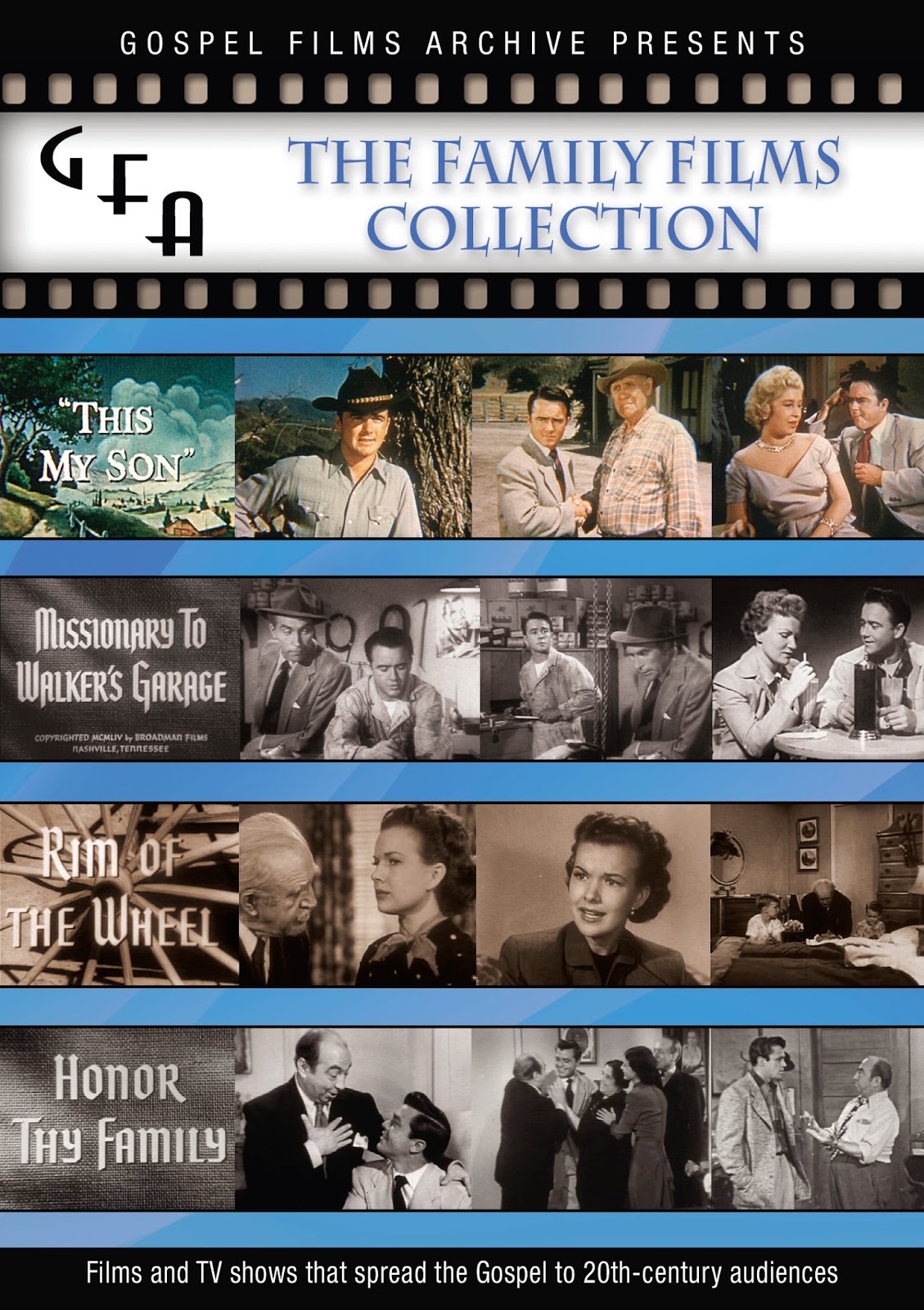 The Family Films Collection tells contemporary stories (1950s era) of Christians struggling with problems of faith and family.  They are each produced by Hollywood professionals and peopled with actors you have seen a hundred times.  Dick Jones, who began as a child actor in 1934, took time out to make This My Son (1954) between westerns stints on Range Rider and Buffalo Bill Jr.  Son is a modern re-telling of The Prodigal Son story (as you can see in our video preview down below).  Dick also stars in Missionary to Walker's Garage (1961) as a devout Christian who works in a garage and inspires customers and co-workers.  He wants to become an automotive engineer although his parents would like him to enter the ministry.  Actress Gale Storm, between a 10 year career starring in B-movies and TV fame in "My Little Margie," stars in Rim of the Wheel (1951) as a young housewife so wrapped up in daily living that she drifts away from her faith. Honor Thy Family (1951) is about strife between father and son in an Italian immigrant family. 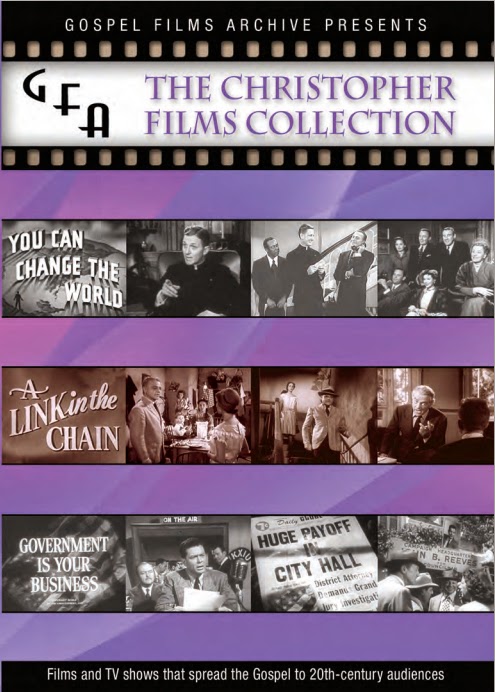 The Christopher Films Collection is a fascinating look at a movement that appealed to Hollywood stars and seems almost secular in its messages that each of us can help "Change the World" by doing good deeds and that we should get involved in government as one way of making a difference.  Father James Keller gathered 9 Hollywood stars together in Jack Benny's home to explain it all in "You Can Change the World" (1951).  The other famous stars are Rochester, William Holden, Loretta Young (who credits this film experience for her move to television), Irene Dunne, Anne Blyth, Paul Douglas, Bing Crosby and Bob Hope.  A Link in the Chain (1957) stars James Cagney in one of his few TV appearances as an aging professor who recalls how he made a difference in the lives of 3 students.  Government is Your Business is the film version of Father Keller's novel about the need to get involved to better the world.  An idealistic young man decides to run for office in the face of corruption already entrenched.

The last two collections tell rarely-seen Bible stories. Loyola Films were produced by Loyola University in Los Angeles and directed by B-movie veteran John T. Coyle from 1946 to 1948.  We have 8 of the 16 films produced and are looking for the others.  Loyola themselves has little knowledge of the series and none of the films.  Boyhood of Jesus dramatizes his birth and first 12 years of life.  The Good Samaritan is the familiar parable fleshed out with more story and character background. The Rich Young Man as recorded in Mark 10 meets Jesus and is told to give away his wealth.  The Unmerciful Servant is a parable about true forgiveness.

Cathedral Films has a long history starting with The Great Commandment feature film in 1939.  Their most lasting achievement that is still shown today is the 12-part, color "Living Christ" series that relates all of Jesus' life.  No Greater Power (1942) tells the Bible story of conniving tax collector  of Jericho Zaccheus who meets Jesus and is transformed. Ambassador for Christ (1949) is one of Cathedral's "Life of St. Paul" series and tells how Paul and Barnabas take the Gospel to Antioch.  Paul preaches that all people, even slaves, are equal in the eyes of God.  I Beheld His Glory (1953) is the story of the last days of Jesus' life told from the perspective of a Roman Centurion who witnessed his trial, crucifixion and resurrection and then converted to Christianity. The color film was first shown on TV during Easter week in 1953 and is the only one of the 18 films in our first five collections that has been widely available before.

Here is a preview trailer of some of these 18 films: