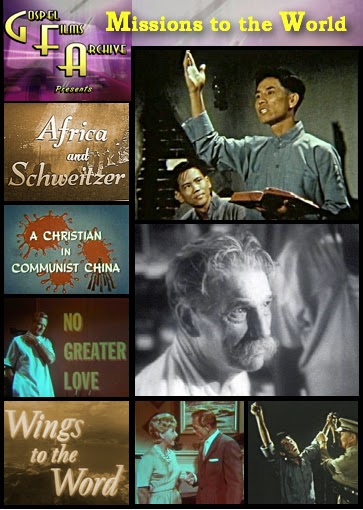 Since my last blog post, the Gospel Films Archive team has released the first 5 collections on DVD.  Quality is very good to excellent on each film and, while they could be improved by new transfers to High-Def, they really only need that kind of restoration for television.  Rather than ask for contributions, we can now reward any help at the $25 level with DVDs of forgotten Gospel films.  Any profits on the DVD sales will help acquire more films and begin needed restoration of many that would benefit from color correction, clean-up, etc.

"Missions to the World" contains 4 films about Christian missionary work, and yet they will have wider appeal to secular audiences as well.  All are expertly made by Hollywood professionals.


Africa and Schweitzer (1961/27m Cathedral Films) Superb documentary on Albert Schweitzer's Christian missionary work in Africa. Narrated by Lowell Thomas and exquisitely photographed in the Belgian Congo by Sven Nykvist, Ingmar Bergman's famed academy-award winning cinematographer.  This forgotten film (can't find any reference to it on the Internet) includes footage of the legendary Schweitzer at work in Africa just four years before his death.

A Christian in Communist China (1961/color/19m Film Services) A defiant Chinese Christian pastor, who has been conducting secret religious services in Communist China, is discovered and tortured. He escapes, but as he sails into Hong Kong harbor in a small fishing boat and hears a church choir singing in the distance, he decides to turn back to the people in his homeland who have looked to him for faith.  The subject of this 53-year-old film is still relevant today.

No Greater Love (1960/color/30m Film Services) Richard Denning and Evelyn Ankers in the dynamic story of a nurse who opposes her doctor husband’s desire to volunteer with other Christian professionals for work in the mission fields.  They travel to Madagascar where the story ends with heartfelt impact and a call to Christian dedication and service.

Richard Denning was an early TV star in the mystery-comedy "Mr. and Mrs. North" (1952-'54), and the hero of 1950's sci-fi films like "Creature from the Black Lagoon."  "No Greater Love" was made just before his solo private eye series "Michael Shayne" in 1961-'62.  Denning was married to Evelyn Ankers, horror film queen of "The Wolfman" and other Universals of the 1940s.  Ankers came out of retirement to work with her husband in what became her last screen appearance.

Art Linkletter also appears in the film to moderate a seminar that convinces Denning to volunteer his dentistry skills in Madagascar.  Many celebrities contributed their time and talents to these films, or worked very cheaply, because they believed in the messages.

Wings to the Word (1951/30m Protestant Film Commission)
Narrated by Alexander Scourby. The Reverend Rodger Perkins, a Presbyterian missionary to Brazil, portrays himself in this true story of a young missionary flyer who travels between remote villages in an impassioned campaign to use "wings to speed the Word of God." 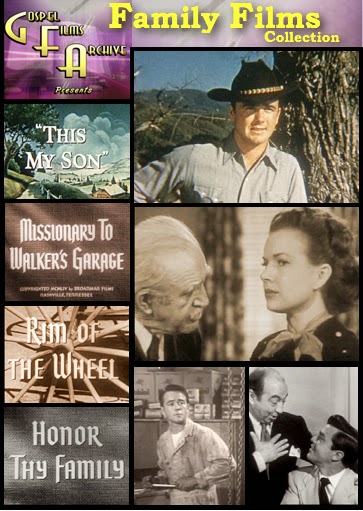 "Family Films" was founded by entrepreneur Sam Hersh in 1946 to create entertainment for the entire family. Top Hollywood talent enhances these 4 inspired mini-movies. Former Child star Dickie Jones stars in the first two, which are not included in this IMDB filmography.  Dickie first appeared as a young child in 1934, played a teenager in several Gene Autry westerns of the late 1940s and sidekick in "The Range Rider" TV show 1951-'53.  Still very much a TV cowboy star, he played "Buffalo Bill Jr." (1955-'56) after these two films for Family Films.

This My Son
(1954/30m/color) Dick Jones plays a modern day prodigal son from Luke 15. A young son is seduced by big city life and sells his interest in the family ranch to his father and brother. Strong acting and production values enhance this fine film commissioned by the Southern Baptist Convention. Release prints were in black & white and this is the only known color version.

Missionary to Walker's Garage
(1954/28m) Dick Jones plays Mark, who wants to be an automotive engineer and a Christian businessman. His parents want him to join the clergy. An inspired and literate script brings to life the "all things work together" message of Roman's 8:28 "

Rim of the Wheel
(1951/23m) Gale Storm, after ten years as a star in Monogram features and right on the brink of TV fame as My Little Margie, shows off her considerable acting chops.  The story of a young wife who is on a constant round of social activities and neglecting her home and family. Through the fatherly advice of an elderly neighbor, she comes to realize that religion has a definite place in the home and that the church is important in her life.

Honor Thy Family
(1951/27m) A cast of familiar faces adds fun to this comedy-Drama about an Italian immigrant father and son learning to appreciate each other. The script is a charming blend of the prodigal son of Luke 15 and the "Honor thy father and mother" message of Ephesians 6:2.

I will discuss our other 3 first releases next time - Christopher Films, Loyola Films and Cathedral Films.  You can read about them now at Indiegogo or the GFA Website.
This large body of outstanding, professionally made "church" films that helped spread the Gospel in the 20th century is unknown to most today.  The films are still powerful and inspiring and well deserving of re-release.  They will have wide appeal to both film fans and Christians who are unaware of this lost history. Please help spread the word by telling any friends, bloggers, websites, etc., who might also be interested.  Help us get these films back on television where they can reach a wide audience.  We thank you!