Edgar Kennedy's 103 Average Man RKO shorts were kept fresh over 17 years by creative plots and a shifting cast of supporting actors. Not only did actors come and go but the in-law relationships changed as writers and directors experimented to find the perfect formula to frustrate Edgar for maximum laughs.  In most films Edgar does have a wife with assorted in-laws added as needed. The family often takes on a new project and fails collectively such as:

a) Finding a bottle of champaign, the family builds a boat so they can christen it. (#7-Giggle Water)

b) The family goes into the interior decorating business. (#13-Good Housewrecking)

c) The family goes on vacation in their new trailer.  (#94-Heading for Trouble)

d) The family decides to jar their own fruit preserves. (#102-Home Canning)

In others the family tries to e) adopt a baby, f) run a gas station, g) manage a department store, h) build a cabin in the mountains, i) confront an irate landlord, j) open a diner, etc.  "Try" is a key word as you can guess how most efforts turn out.

It's time to meet Edgar's two main families plus variations and the actors who portrayed them.

The first family in "Lemon Meringue" (1931) consisted of Edgar's wife (Florence Lake), her Mother (Dot Farley) and Brother (Billy Eugene), the dreaded In-Laws that live under the same roof sponging off poor Edgar and making his every waking moment ... trying, to say the least. This same cast finished the series from 1944 to 1948 with the exception of Jack Rice replacing Billy Eugene as Brother.

Florence Lake was the sister of Arthur Lake who played Dagwood Bumstead in the Blondie movies.  (Florence even played Blondie on the radio for a period while Penny Singleton was pregnant.) She met Harry Sweet in 1929, who cast her as Edgar's wife in the prototype "Rough House Rhythm" (1931).  She described her role: "I was the dumb blonde talkative wife.  The lines were not written, the script just said Florence ad libs."  Her ditzy chatter often became so annoying that Edgar spoke for the audience when he screamed: "Florence ... (pause) ... Shut up!"  Still there was a certain onscreen respect and affection between them, which was desperately needed to ward off the In-Laws.

Dot Farley forever made her mark as the meddling, nagging mother-in-law from hell.  She first acted with Edgar way back in 1913 in "The Bangville Police" and was in short comedies through the silent era with Ben Turpin, Billy Bevan, Mack Swain and others at Sennett.  How Edgar put up with "Mother" in short after short is a mystery.  How much frustration can one man take was of course the set up for laughter.  Edgar could only take so much and usually melted into a slow burn at the fade-out.  There were exceptions that kept the series fresh.  "Edgar Hamlet" (1935) ends with Wife, Mother and Brother all paying Edgar sincere compliments for his rendition of Hamlet's "To be or not to be" soliloquy.

Billy Eugene was the first to play Florence's brother, or Edgar's Brother-In-Law.  "Brother," as Edgar often called him, was a loafing bum without a job who took delight in hiding behind Florence while needling Edgar. Some plots had Edgar trying to get Brother married or into a job, anything to get him to move out. Billy Eugene was in the first 18 Average Man shorts until he disappeared from films after "In Laws Are Out" in 1934.

Jack Rice stepped right into the Brother shoes without a lost beat in "A Blasted Event" (1936). Jack also appeared in the 1940s Blondie features as Ollie.  It is jarring to see him show up in several Edgar shorts as different characters.  In "Baby Daze" (1939) he plays an expectant father in the waiting room, and in "T'Aint Legal" (1940) he delivers a $5,000 prize check for Edgar being so happily married. Both films were made during a transition period when the brother-in-law character had been written out.

Florence Lake left the series suddenly after "Dummy Ache" in 1936.  She popped up in 1938's "Ears of Experience" (1938) with Jack as Brother and Bill Franey as her Father who lived with them instead of Mother Dot, and again in "Two for the Money" with Dot and Jack in 1942.  Flo returned to the series to stay in "Radio Rampage" (1944). One reason she dropped out may have been a drinking problem which she eventually overcame and led her to preach against the evils of drink from then on.  Edgar's biographer, Bill Cassara, has these thoughts on the series changes during the years 1936 to 1942:

"In retrospect Edgar did appear to have two families during the 17 year run.  Many factors came into play.  The series only lasted until the end of the year with no guarantees for a long run.  If there were salary increase demands, that could partly explain the first turnover.  Billy Franey was an old pal of Edgar's and getting him on board may have actually saved money (eliminating the brother-in-law character).  That all changed when Franey unexpectedly died.  Also, Florence filled in on radio during the time Penny Singleton was doing the "Blondie" series.  The Edgar series was always popular with middle America and no one took much notice of the family changes.  For everyone to come back into the fold was a nice capper to the series."

Two experiments right after "Dummy Ache" found Edgar soloing.  In "Vocalizing" (1936) he takes a singer home from her concert and soon becomes her chauffeur.  In "Hillbilly Goat" (1937) Edgar is a traveling salesman in the Ozarks who encounters a love-starved widow.  He may have had a family back home but since they don't figure in the plots we will never know.  Both were funny films, but the Average Man is a married man, so the family quickly returned though in a new dynamic.

In sharp contrast to Florence's dumb blonde, Vivien Oakland kept Edgar in his place with acerbic sarcasm of her own.  He knew she was right most of the time and so tried to become the husband she expected.  Her strong character replaced the need for a mother-in-law presence. Hmm, what if Edgar also lived with a father-in-law?

Bill Franey first appeared with Edgar in "Dummy Ache" (1936) and played various roles in most of the shorts thereafter until his early death in 1940 at only 51, although he looked like he was 71! Bill was a good friend of Edgar's in real life but a relentless tyrant in the shorts to rival the mother-in-law figure he replaced.  In fact he became Vivien's father or "Pop" in "Edgar and Goliath" in 1937 and the role stuck. When it looks like Edgar and Vivien might not have been married for ten years in "T'Aint Legal" (1940), Franey kicks Edgar out of "her" house and tries to turn him in to the police.

Other actresses stepped in to play Wife from time to time during the period Florence was away.  Irene Ryan, later famous as Granny on "Beverly Hillbillies," was Wife in "Hold Your Temper" and "Indian Signs," both 1940, with Dot Farley and Jack Rice in their familiar roles.  Vivian Tobin is Wife in the hilarious "Kennedy's Castle" (1938) with Franey as the live-in Pop.  Comedian Sally Payne, fresh from playing Gabby Hayes' daughter in Roy Rogers westerns, played Wife six times in 1941 and 1942.  Pauline Drake played Wife in three films 1943-'44. 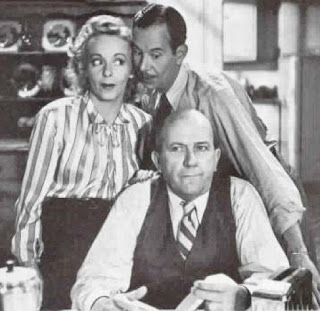 Florence Lake returned for good in "Radio Rampage" (1944) along with Dot Farley and Jack Rice through the last film in the series, "Contest Crazy" (1948).  The family dynamic remained true to Harry Sweet's original concept back in 1931 and never seemed to grow stale. The films were as funny as ever.  Many classic scenes came from this final, definitive family circle like the ring swallowed by a chicken in "Feather Your Nest," the washing machine carried up a long flight of stairs in "It's Your Move," tobacco shortages from the war in "What, No Cigarettes?," beef shortages in "The Big Beef," and "I'll Fix It Myself" which is self explanatory.

The Average Man series had an unprecedented 17-year run in the movies with largely the same cast and set the stage for "I Love Lucy," "Ozzie and Harriet," "I Married Joan," "Amos 'n' Andy," "My Little Margie" and so many TV sit-coms to come.

One can easily envision "The Trouble with Edgar" becoming television's first smash situation comedy with Florence, Dot and Jack repeating their roles with perhaps a cute kid next door thrown in. Instead that honor went to "The Trouble with Father" starring June and Stu Erwin that debuted in 1950.  (I am sure someone will point me to an earlier TV sit-com.)  It could have been Edgar, except for his untimely death in 1948 at the age of 58.  However, I don't think he would have gone into TV at that point in his career since he was better paid for making six two-reelers a year at RKO and was in high demand in A-comedies like his final film "My Dream is Yours" (1949) with Doris Day.

In "Will Power" (1936) Edgar sends himself a phony telegram so he can fake a heart attack so that while he is sick Brother will be forced to find a job.  The family rallies around Edgar with some concern.


Photos are courtesy of Dennis Atkinson and his RKO Comedy Classics.

More information about the upcoming Kickstarter campaign, an original Slow Burn Edgar music video and plans for The Edgar Kennedy Show are at the Edgar website.
Posted by Ron Hall at 6:46 PM