Birth of the Average Man!

In 1930 Edgar Kennedy was second banana for every comedian on the Hal Roach lot -- Laurel and Hardy, Our Gang, Harry Langdon, Charley Chase and The Boy Friends.  He often played Kennedy the Cop and even tried his hand directing Charley Chase and Thelma Todd in "All Teed Up" and the Boy Friends in "Bigger and Better."  But there didn't seem to be an opening at Roach for Edgar to star.  His popular cop character was the butt of jokes, requiring little comic talent, and could easily be replaced by Roach stalwart Tiny Sandford.

Edgar did freelance work outside Roach that same year in two comedy shorts for Pathé in which he co-starred with perennial drunk Arthur Houseman: "Help Wanted, Female" and "Next Door Neighbors," directed by Harry Sweet.

Also in 1930-'31 fledgling studio RKO Radio Pictures was putting together their own short subject department that flourished until the studio closed in the mid-1950s.  Leonard Maltin tells the story in "The Great Movie Shorts" (Crown, 1972):

"In the early days of sound, several companies -- FBO, Pathé, and Radio Pictures -- were gradually merged together.  At first they tried to maintain separate entities, but finally they came together as RKO Radio Pictures.  In the merger stages, a permanent short-subject department was formed under the direction of Harry Sweet, a writer-director-comic.  Gloria Morgan, a script supervisor on the shorts, remembers him as "a very gentle, funny man with a delicious sense of humor."

"Sweet initiated several series, most notably Edgar Kennedy's "Mr. Average Man" comedies, and directed many himself.  He also starred in a number of shorts and supervised other comedies being made at the time with Clark and McCullough, the Masquers Club, etc.  When he died in a plane crash, producer Lou Brock took over the short-subject program and stayed on for many years."

Harry Sweet acted in more than 60 films starting in 1919.  One may spot him as Edgar's pal in "Carnival Boat" (1932) with William Boyd and Ginger Rogers, or watch his last comedy short "Just a Pain in the Parlor" (aka. "How Comedies Are Born"). Harry also directed 58 comedy shorts from 1920 to 1933 and is credited as writer on 27 of them.  Two comic spirits more kindred than Edgar and Harry may never have existed.

Sweet made two "Whoopie Comedies" teaming Edgar with screen wife Florence Lake during the transition period to the RKO shorts.  "Rough House Rhythm" was released 4/5/1931 and "All Gummed Up" followed on 5/24/1931.  Neither film are available for viewing, but the plot of "Rough House Rhythm" involves Edgar and Florence getting married and setting up housekeeping with Flo's brother sharing the same cramped dwelling.  In "All Gummed Up" the nagging mother-in-law (played by Louise Carver) was added and William Eugene was cast as "Brother."

The stage was set for the first official "Average Man" film that was released by RKO on Aug. 3, 1931.  At the last minute Dot Farley, who first acted with Edgar in 1913, filled in for Louise Carver and hung around to irk Edgar through 1948 as "Mother."

Louella Parsons announced in her syndicated column:  "RKO-Pathé believes that daily happenings in the life of the ordinary citizen will furnish enough comedy for a series of short subjects.  They have signed Edgar Kennedy, who has appeared in innumerable Laurel and Hardy comedies, to play the lead in Mr. Average Man, with Harry Sweet directing.  The first of the series, "Lemon Meringue," starts this week and included in the cast with Mr. Kennedy are Dot Farley, Florence Lake and William Eugene."

An exhibitor at the time wrote about the film: "A Mr. Average Man comedy, featuring Edgar Kennedy.  His mother-in-law and brother-in-law with the aid of his wife, get him to open a restaurant and quit his regular salary job.  The action takes place just before the opening on the hash house.  The timing of the gags is pretty close to perfect, and it works up to a good old slapstick finish with pies being thrown regardless." Edgar later bragged about being hit in the face with pies 164 times in a single movie.

Is your mouth watering to see this film?  Can you taste the lemon?  Sadly, "Lemon Meringue" is the holy grail of all sound comedy shorts because it is the very first of Edgar's 103 RKO shorts, it reportedly contains the largest pie fight of all time (who would not love to see that?) and it is presently LOST.  The film was never released to television in the 1950s, the Library of Congress and other american film archives have no material, and virtually no one has seen the film since it's original release.  There is always hope that a print lies hidden in some foreign archive, or that a 16mm print struck in the 1930s or 40s for home use might yet resurface. 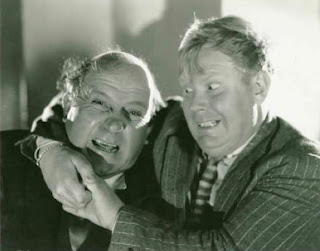 The second film in Edgar's RKO series, "Thanks Again," does exist in 35mm although it has been seen by few since it was not in the 1950s TV package.  The plot involves the family acquiring a single prop airplane, which they must first repair in a hanger before a bizarre accident somehow puts Edgar in the cockpit flying wild during the climax.

Harry Sweet wrote and directed 13 shorts with Edgar Kennedy -- "Next Door Neighbors" for Pathé in 1930, the two Whoopie Comedy precursors to the Average Man in 1931 and the first 10 shorts in the RKO series.  Without question Sweet was the architect of Edgar's domestic comedy shorts that ran for 103 episodes until Edgar's passing in 1948.  The format then morphed into the well-loved TV sit-coms typified by "Trouble with Father," "I Married Joan," "Ozzie and Harriet," "I Love Lucy," "The Honeymooners" and so many more.

Harry Sweet's final Edgar Kennedy short is "Good Housewrecking" released June 16, 1933.  The family tries their hand at interior decorating, to naturally disastrous results as you can see in this excerpt:

The above quotes are from Leonard Maltin's "The Great Movie Shorts" and from Bill Cassara's "Edgar Kennedy - Master of the Slow Burn."

Photos are courtesy of Dennis Atkinson and his RKO Comedy Classics.

Please visit The Edgar Kennedy Restoration Project on Facebook and LIKE Edgar.
Posted by Ron Hall at 9:44 AM