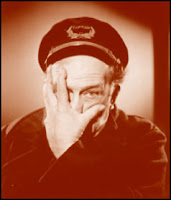 Comedian Edgar Kennedy joined Mack Sennett in 1913 as an original Keystone Kop in "The Bangville Police." He both acted and directed with Chaplin, Arbuckle, Ben Turpin and all the Sennett comics in the early days.  In 1928 Edgar went to Hal Roach and is well remembered today as Kennedy the Cop and other roles with Laurel and Hardy, Thelma Todd, Charlie Chase and Our Gang.  His most famous part is the lemonade vendor in the Marx Brothers "Duck Soup."

Edgar hit his stride in the 1930s and '40s appearing in dozens of features while starring in his own Average Man RKO series that produced 103 two-reel comedies from 1931 to 1948. Edgar became world famous for his slow-burn/face-wipe reaction to life's indignities.  It comes as little surprise that such a comic icon made his mark in cartoons as well. 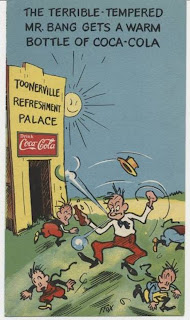 Newspaper cartoonist Fontaine Fox created the comic strip "Toonerville Folk" in 1908.  It's look at the oddball denizens and foibles of a small town on the edge of a big city (i.e. suburbs) became so popular that the strip ran until 1955. The Toonerville Trolley to and from town and run by The Skipper was central to many gags.  One of the richly sketched characters was the town bully Mickey McGuire, who was played in late silent/early sound shorts by Mickey Rooney.  Another character that caught on with readers was "The Terrible Tempered Mr. Bang" as pictured here in a one panel strip.

No evidence suggests that Edgar Kennedy's emerging personality in his Roach and RKO series is based on Mr. Bang.  In fact Edgar rarely blows his top. His patience is pushed to the limit until he finds grudging acceptance of his fate and lets it all out in his trademark slow burn. What Mr. Bang did was introduce audiences to a man severely tested and to the inherent humor in losing one's temper. Edgar at Hal Roach was tested often with disregard for his authority as a policeman by Laurel and Hardy in "Leave 'Em Laughing" (1928), as Uncle Edgar with the gouty foot that gets bopped a dozen times in "A Perfect Day" (1929), as the recipient of ice cream cones to his head in "A Pair of Tights" (1929) and more. Edgar refined Mr. Bang's outbursts into simmering slow burns at RKO. 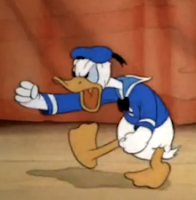 How about Edgar's influence on animated cartoon characters in the movies?  Who was often frustrated to the point of glowering, simmering and seething with rage until he could take no more and blew his stack? As his opening theme song goes:

Who's got the sweet disposition?
One guess guess who.
Who never never starts an argument?
Who never shows a bit of temperament?
Who's never wrong, but always right?
Who'd never dream of starting a fight?
Who gets stuck with all the bad luck?
No one, but Donald Duck. 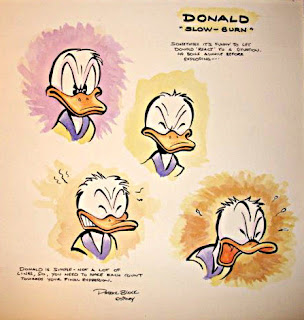 Wikipedia: Donald's two dominant personality traits are his short temper and his positive outlook on life. Many Donald shorts start with Donald in a happy mood, without a care in the world until something comes along and spoils his day. His anger is a great cause of suffering in his life. On multiple occasions, it has caused him to get in over his head and lose competitions. There are times when he fights to keep his temper, and he sometimes succeeds in doing so temporarily, but he always returns to his normal angry self in the end.

Edgar Kennedy developed his similar character in the late 1920s, made his first RKO short in 1931 and had laid claim to the gesture and term "slow burn" by the mid-1930s.  Donald first appeared in 1934's "The Wise Little Hen" and it took a few years to refine his character, a major facet of which was blowing his stack after repeated aggravations.  This model sheet at first glance appears to be a guide to 1940s Donald Duck animators, although it was drawn by 1990's Disney comics cartoonist Pat Block.  Enlarge it to read the comment: "Sometimes it's funny to let Donald react to a situation.  He boils awhile before exploding."

So there is a strong case that Edgar influenced Donald, but they are not that close.  Donald blows up and Edgar tries not to.  No physical resemblance, that's for sure, but another cartoon character does look like Edgar, has a temper problem he tries to control and his cartoon plots could have been written for Edgar!

Andy Panda first appeared in the 1939 Walter Lantz Universal cartune "Life Begins for Andy Panda."  Andy is still famous today for his many theatrical cartoons made through 1949 and as Woody Woodpecker's pal in comic books.  It's Andy's father or "Pop" that has so much in common with Edgar Kennedy.

One of my earliest childhood memories is watching an 8mm, black and white, silent version of "Crazy House" (1940), again and again from the age of four on.  It ran about 12 minutes at 8mm "silent" speed and included inter-titles like all silents.  On a dark and stormy night Andy and Pop drive through a storm and right into a deep puddle. At the bottom of the pond Pop has to count to ten to simmer down. Later they find refuge in a carnival fun house that is closed for the season. Trying to get a drink from a fountain also tests Pop's patience as every little annoyance does. "Count to ten," Andy keeps reminding him. In the fade-out gag, again at the bottom of that pond, he turns purple with rage, counts down from ten by 2s and so cools down to normal in alternate stripes. 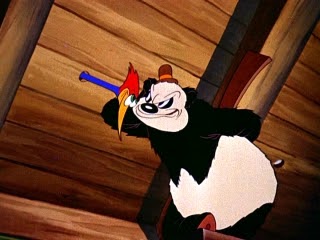 Pop did not appear in that many cartoons, but 1940's "Knock Knock" was memorable as the first cartoon with future star Woody Woodpecker. You can see how well they got along. Simple plots like "Get bird off roof" drove most of Edgar Kennedy's two-reelers.

In 1941 Pop soloed in "Andy Panda's Pop" in which Andy does not even appear, although Mrs. Panda does briefly.  The plot is pure Edgar Kennedy:  Andy's Pop asks the local roofing company if they will repair his shoddy roof. He is quickly turned off by the exorbitant price and determines, "I'll fix it myself!" Naturally, Pop isn't the most skilled of workers but does his best anyway. Unfortunately, his best turns to his worst when an annoying pelican distracts him by making the roof his new home. Pop angrily tries to rid himself of the feathered pest (who just wants to mind his own business) and destroys the roof more than ever in the process. Admitting defeat, he again calls the roofing company only to be irately told, "FIX IT YOURSELF!!!"

Edgar made the short "I'll Fix It" in 1941 as well, in which he tries to install a new hot-water heater, but the theme of him and the family fixing something they should never mess with goes way back to repairing an airplane in "Thanks Again" (1931).  Edgar Kennedy had firmly staked out his character by the mid-1930s.  His slow burn was famous the world over.  Any cartoon that borrowed Edgar's mannerisms was an homage to the comedian and to the comedy inherent in repressed anger.

For whatever reasons, Walter Lantz did not use Pop again but preferred the cuter, smaller and decidely less complex Andy Panda, while Woody was left to do battle with Wally Walrus and Buzz Buzzard. This was probably best for Edgar Kennedy, who didn't need an angry, bald cartoon rival. 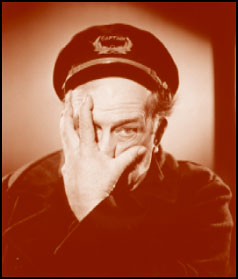