When Edgar Kennedy joined Mack Sennett's Keystone Film Company in 1913 he found steady work in short after short that were filmed in a few days at most.  Edgar was not always used as a comedian.  Sennett's other large men, Mack Swain and Fatty Arbuckle, simply looked funny, but Edgar needed a funny mustache or costume.  His imposing stature and boxing experience made him valuable playing straight men or petty crooks in many films.

Biographer Bill Cassara sums up Edgar's varying roles at Keystone:  "As a stock player, Edgar was playing villains, comic heavies, cops and even handsome suitors. Oversized mustaches, face make-up, wigs and other exaggerated features and clothes were expected for character portrayals. Each actor was expected to apply their own makeup.  Stock players were supposed to be unrecognizable from one comedy to another, often depicting different characters in the same film." 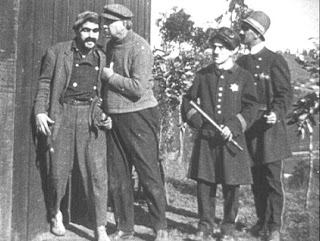 Charlie Chaplin's first released film for Keystone was Kid Auto Races at Venice, impromptu clowning around at a soap-box derby filmed on Jan. 10, 1914, a full year after Edgar had joined Sennett. Charlie had already made Making a Living and his third film was Mabel's Strange Predicament with Mabel Normand.

Only recently Chaplin's fourth and previously unknown Keystone was discovered by film historian Paul Gierucki on 16mm at an antiques show in Michigan -- A Thief Catcher released on Feb. 19, 1914.  Ford Sterling stars and Chaplin plays a minor role as a policeman who helps apprehend crooks Edgar Kennedy and Mack Swain, all on display in this wonderful still along with an unidentified 4th cop. Charlie next made Between Showers without Edgar and followed with A Film Johnnie, released March 2, 1914. This is the earliest Edgar Kennedy film that has been restored to excellent quality and proves to be a milestone for both he and Charlie. Here is part of the plot from Phil Posner's Charlie Chaplin Filmography: 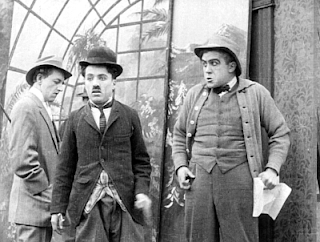 In Charlie Chaplin's fifth Keystone comedy we get a look inside the famous laugh factory. Charlie is a movie fan and we first see him creating havoc at a theatre where he gets too involved with the action on the screen and the beautiful actress in the film.  Ejected from the theatre, he proceeds to Keystone itself where he mooches money from Roscoe Arbuckle as he arrives at work. Charlie sneaks into the studio and disrupts the filming, much to the chagrin of the director. He mistakes a scene where the starlet is being manhandled for reality and comes to her rescue. Firing a prop pistol in all directions, he clears the stages before leaving.

Edgar plays the harried film director who can't seem to find a real cop to get Charlie out of the film he is trying to direct and out of the studio. Scenes are pretty much improvised around this basic premise.  Edgar displays several creative grimaces that would develop into "burns" years later, though nothing at Sennett was ever "slow."

Of the 35 films that Chaplin made for Sennett in his only year at Keystone, Edgar Kennedy appeared in 12 of them.  Edgar had a straight role he was born for as a boxing protagonist in The Knockout (6/11/14).  As Cyclone Finn he battles star Roscoe "Fatty" Arbuckle.  Arbuckle's wife Minta Durfee is also in the film along with a cameo by Sennett himself.  Chaplin only played a minor part in the second half as the referee. 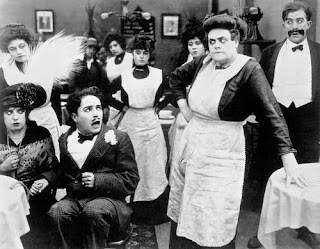 The most famous Sennett film from 1914 is the first comedy feature film -- Tillie's Punctured Romance released 11/14/14. Marie Dressler was imported from Broadway for star power, but Charlie as a cad who romances Mabel when he can sneak it in and Marie when she has money got the best notices.  Every comedian on the Sennett lot appears from Charley Chase and Mack Swain to Slim Summerville and Al St. John as Keystone Kops.  Although the Kops run amuck in the climactic chases and pratfalls, Edgar was not one of them this time.  He played a straight role as the restaurant owner where Tillie works, as seen in this still.  In a different disguise he also plays a butler!

It's fascinating to see Edgar Kennedy in minor roles in these early Keystones.  He undeniably adds to each film but displays few glimmers of true comic talent that were to come.  Edgar watched and learned and finally hit his stride as the average man in his own shorts in the early 1930s, by which time only Chaplin remained a major star from the Sennett era.  Fatty Arbuckle, Mable Normand, Ford Sterling, Mack Swain, Charles Murray and Hank Mann had all but disappeared with the coming of sound.  Edgar survived and flourished and will entertain a new generation with "The Edgar Kennedy Show" now in development.


The definitive DVD set of "Chaplin at Keystone" is available from Flicker Alley. Good sources for DVDs of rare silent comedies are Looser Than Loose and Grapevine Video.   Please visit the Edgar Kennedy Restoration Project and LIKE Edgar, leave a comment and ask your friends to spread the word about the campaign to bring back Edgar.  Read about Edgar's dramatic films at the Bijou Blog.