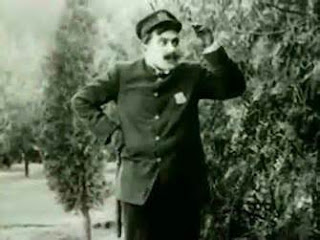 Team Edgar plans to produce The Edgar Kennedy Show in 30 minute episodes.  The centerpiece of each will be one of his complete RKO shorts restored to high def.  The balance will consist of mini-documentaries devoted to various aspects of Edgar's career.  These will be narrated by Edgar's biographer Bill Cassara and include generous stills and film clips.  In time we hope to produce a visual biography of Edgar's World.

For example, one segment will certainly cover how Edgar got into the movies.  Was he an original Keystone Kop?  You bet! 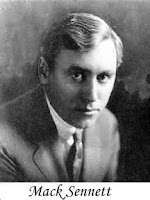 Edgar had acting aspirations at an early age although his high-pitched voice did not fit his burly physique.  While touring with a theatrical troupe in 1911 in Chicago he appeared in his first film -- Brown of Harvard -- for the Selig Polyscope Company.  His voice did not matter in silent films.

In 1912 Edgar trained for a boxing career and had some success until being knocked out by Kid Kenneth on Feb. 8, 1913.  Shortly thereafter he walked onto the fledgling Keystone Film Company in Los Angeles and asked Mack Sennett for a job.  The year was 1913 and Edgar was 23.  He found steady employment as part of the Sennett stock company, appearing in almost every film over the next few years starting at a salary of $3 a day.  By comparison, Charlie Chaplin was a late comer to pictures making his first Little Tramp appearance in 1914's Kid Auto Races in Venice.

Some sources credit Edgar's first Sennett film as Hoffmeyer's Legacy (released Dec. 1912) and also claim it is the first with the Keystone Kops.  Neither can be verified since it is sadly a lost film.  Edgar was still boxing in San Francisco when the film was produced and so could hardly have been in it.

On April 24, 1913 Sennett released Bangville Police which does survive and is considered the first real Keystone Kops film.  Actor Fred Mace plays the police chief and is the only one dressed as a cop.  Others who rush to assist him are Edgar, Raymond Hatton who had a long career in westerns, Charles Avery, Rube Miller, Jack Leonard and Fred Happ.  Edgar is the big guy, naturally, who wields a shovel in his earliest surviving film role. 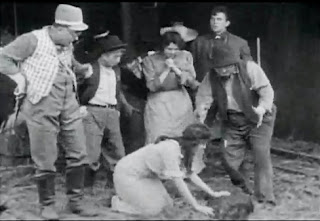 Also in the cast in an incredible coincidence is Dot Farley as Mabel Normand's mother.  Dot played Edgar's domineering mother-in-law starting 18 years later in many of his RKO shorts, and she is in the very last one, Home Canning (1948), a full 35 years later.  Dot is the woman in this still with the clenched hands.  Edgar is just behind Dot holding the shovel handle.

The simple plot of Bangville Police generates a whole lot of mayhem.  It seems that farm maid Mabel overhears two strangers in her barn and thinks they plan to rob her, so she locks herself in the house and phones the police.  When her mother and father arrive and batter at the door to get in, she thinks they are the imaginary attackers and hides in a closet.  The police chief races to the rescue in a steam driven jalopy that blows up and then continues on foot.  A crowd of deputies with badges, including Edgar dressed as a farm hand, also run to help.  See how it all turns out by watching the film right here!


The title "Bangville" reminded me of Mr. Bang.  Cartoonist Fontaine Fox created a popular comic strip "Toonerville Folks" in 1908 that was syndicated everywhere by 1913.  Toonerville was a rural town connected to the big city by the Toonerville Trolley.  One of the cantankerous characters was the "Terrible-Tempered Mr. Bang" who got overly upset at almost anything.  It is possible that director Harry Sweet to some degree modeled Edgar's average man character after Mr. Bang in the early RKO shorts.  It is certain that audiences were familiar with and used to laughing at such a frustrated man from the comic, as you can judge in this sample strip: 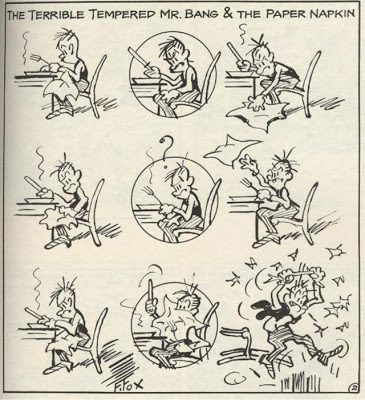 Please visit the Edgar Kennedy Restoration Project on Facebook and LIKE Edgar!
More information about the Edgar Project is on this web page.