The Christophers are a Christian inspirational group that was founded in 1945 by Father James Keller.  The name of the group is derived from the Greek word "christophoros", which means "Christ-bearer." Although the founders were Maryknoll priests of the Roman Catholic orientation, The Christophers preach a doctrine of religious tolerance and intend their publications to be generally relevant to those of all faiths.

The Christophers are based in New York City.  Their newsletter, "Christopher News Notes," is published 10 times a year. They have produced a weekly television show ("Christopher Closeup") since 1952, often featuring interviews with or original dramas starring celebrities who appeared without charge for their services.  It is these forgotten and in many cases lost films that are of great interest to movie fans.

I found out personally over 15 years ago that the current Christophers office in New York has very few of their early productions.  My associate Bob DeFlores contacted them, which resulted in us trading them a high quality video master of their first TV show - You Can Change the World - in exchange for VHS copies of Faith, Hope and Hogan with Bing, Bob Hope and Ben Hogan and a musical special of songs by Mario Lanza, Dennis Day, Bing and others compiled from previous shows.

Jack Waite worked for James Keller for one year, 1966, and wrote down some fascinating memories here.  Since Father Keller could only afford to pay him $70 a week to live in New York, he let Jack live in the office, which was against the law, and...

"Many of the best Christopher filmings had taken place long before I ever worked there, of course.  These old films were preserved in a storage section of the building. (There was a projector, and a screen in the room, along with all the cans full of films.)  Now, I have already explained that I lived in The Christophers building.  So, that meant that after everyone else went home, once the work day had come to an end, I remained in the building, because the Christopher building was where I actually lived.  So, I asked Father Keller for permission to amuse myself, by watching the hundreds of Christopher films which were sitting on those shelves in the storage area.  Keller said, "Sure...go ahead."  So, in that way, I got to see many of the programs which had aired years earlier ... films which were now just sitting in their film cans, slowly rotting away."

Read further about an interview in which Jeanette MacDonald and Rev. Keller had an on air fight over whether he knew or did not know which song she was about to sing!  Although the celebrities donated their services, the studio space and film crew were expensive so multiple episodes were filmed over a few days each year.  One of Jack's jobs was to catch the stars as they got out of a taxi, butter them up with praise on the way to make-up and get them in and out fast so the next celebrity could do their turn.  Hence there was no time to re-take the pointless squabble that Jeanette had started.

Father Keller was so amiable and sincere that Hollywood stars were delighted to appear with him and call him friend, even if they were not religious.  In Faith, Hope and Hogan Father Keller persuades Bob Hope to read a prayer, after which Bob replies "That's the most religion I've had since I saw Going My Way."  The very first Christophers broadcast gathered 9 Hollywood stars in Jack Benny's home - Jack, Rochester, Loretta Young, William Holden, Irene Dunne, Paul Douglas, Bing Crosby, Bob Hope and Ann Blyth - to discuss the ideals and philosophy of the Christophers movement, and how each of us in small ways can help to change the world for the better.

Although still seeking that Jeanette MacDonald episode, to find out what song she really did sing, we have acquired many episodes, including: 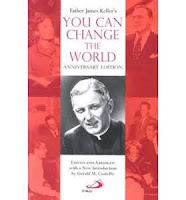 A Link in the Chain - Rare 1957 TV appearance by James Cagney, who play a retiring professor who looks back on how he helped change three students lives.

Government is Your Business - Based on a book by Father Keller, about how good americans should enter politics to fight corruption.

Let George Do It - 1955, with Danny Thomas, Robert Young and Dennis Day.

All God's Children - Korean war vet (played by Mike Conners) returns home and must decide whether to make a lot of money working for his wealthy father in a meaningless job or find a career path that where he could help change the world.

The Lost and Rare team is working on a formula to restore and release these and similar lost films to the public.  You can follow the Christophers' main theme that You can change the world through these clips from the six episodes:

Visit my websites at Festival Films and Lost and Rare.
Posted by Ron Hall at 10:11 PM