Send Me Your Hard Drives!

I (mis-) use this space to vent my latest interests, show rare film clips and ... hmm, what am I doing here?  Not to waste your time, but this subject may be a bit boring to all but a few customers.  It involves supplying the public domain films on Mpeg2 video file format.  That's it.  The last two months much of my time has been devoted to converting DVDs to Mpeg2.

I have made Mpeg4 videos for uploading to youtube and to create montage videos in the iMovie program that came with my Mac.  I noticed that the focus in particular was not as sharp, so I did not want to produce a library of those.  I talked to TV stations who each seemed to have their unique procedures.  They wanted highest format DVD, which they ran into their system without any quality loss, edited in commercials and outputted to DVCam for broadcast.  Movie theaters, Cafe Roxy and Movie Memory program users also prefer DVDs for large screen TVs and video projection.

I have sold DVDs to websites that stream videos.  However, other potential customers have requested video files already converted for quicker uploading to streaming websites.  I pitched the argument that if they buy a DVD-R, then they could control variables like color saturation, contrast, brightness and sound quality when they make their own conversions.  Then they would keep the DVD library as back up if ever needed.  Some bought into this while others never got back to me.

I lost business because I was ignorant of the fact that Mpeg2 video files contain the same information as the DVDs.  The quality is not only identical but I can improve it when I convert by adding a tad more color, brightening to bring out the background and then balancing that with contrast to bring back dark tones.  I was fiddling with a dark Fleischer cartoon called "Hold It!" and when I lightened the picture a dog house magically appeared in a shadow.  While an Mpeg4 feature takes up about 1 gb of computer space, an Mpeg2 of the same film uses 3 gb of space.

So six weeks ago a new customer wanted 100 features on an external hard drive.  They were patient enough to wait out my pitch for DVDs, but being in Australia I was not that eager to ship a large order of DVD cases.  We settled on a test.  I sent 6 features on a 16gb USB flash drive stick.  They liked the results and the order for 100 on a 500 gb external hard drive went forward.  Actually 100 plus some free TV show samples fit easily on a 320gb drive, but the cost for 500gb was only a tad more.

A week later I got another request for all TV shows on a hard drive the customer would send me.  Another test stick finalized the order.  Then I got a 1tb hard drive to store the films and I'm in the business of building a library of everything I get an order for on Mpeg2 video files.  I changed the home page of my Festival Films website to read:

All titles in the Public Domain Catalog are available on top-quality, economical DVD-R format as well as Mpeg2 Video Files for Internet streaming. Many TV stations use DVD-R for their broadcasts. DVD-R also works well for online streaming, although some prefer Mpeg2 files all ready to upload. We supply Cafe Roxy Programs on DVD-R because most movie theaters and other venues have DVD projection or large screen TVs in place.

Confession time.  I'm not that technical about computers.  My old version of iMovie will still only run Mpeg4s.  I could not view the Mpeg2 files I was producing until I upgraded my iMac to Mountain Lion OS and added more RAM memory.  What a TV station or Internet streamer does with an Mpeg2 ... well, they know and someday one will explain it to me.

Last Tuesday I got this note from a TV station I had sold DVDs to in January:  We are wanting to schedule Saturday Morning Cartoons on our local channel.  Do you have cartoons that you would recommend?  Also, I read where if we sent a hard drive that it will save us money.  It would also save me space, not having all the DVD cases.  Please let me know how that works.  I followed up by sending a USB stick with a few samples and have already converted many cartoons. 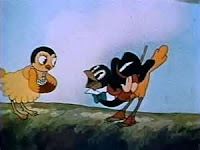 If TV stations can easily select and run computer files, this would solve a cartoon problem I have noted for years.  I sell DVDs of Betty Boop, Popeye, Fleischer Color Classics, Tom and Jerry, etc., but the best way to show/watch cartoons on TV is a balanced program that mixes characters, black and white with color and so on.  I will put cartoon computer files in folders labeled Superman, Little King, Betty Boop, etc., making it easy to dip into each folder for one or two and arrange into a Cartoon Hour.  This is the same idea expressed recently of how Online Movie Memories might work better if segments can be chosen and arranged rather than running the DVD "Memories" I now offer in order.

The future of internet streaming videos on demand has been here for awhile.  I'm finally catching up by offering Mpeg2 files that don't need to be converted, only uploaded.  My conversions are direct from the highest quality DVDs I have collected over the years, and none have annoying logos or watermarks in the corner.  So send me your external hard drives to fill with dreams.

Visit my websites at Festival Films and Lost and Rare.
Posted by Ron Hall at 9:56 AM