An Angel Found me on the Internet!

In the early 90s Leonard Maltin listed Festival Films as a good source to acquire movies on VHS and later on laser disc and DVD in his "TV Movies Book."  This was a nice gesture that gave me a certain  credibility as a legitimate dealer, but the resulting business amounted to ... almost nothing!  It seems like half of the phone calls or letters were of the nature: "My grandfather who is 93 and fading fast appeared in a dozen movies from 1912 to 1919.  Do you have any of them?"  This led to explaining that 95% of ALL films made that early had unfortunately disappeared.  Most other contacts had been looking for some special favorite film for years, even an episode of Howdy Doody they appeared in as a child, and naturally I can't find what they had failed to find.  If a film was out on video then everyone had it.  If not out, then no one did.  I had to explain endlessly that only films in TV Movies with a big black dot at the end had at one time been issued on video, but many were now out of print.

So while I sold a couple of rare, unreleased films like Hellzapoppin' the Maltin listing seen by many millions was more of a hindrance than help.  I am reminded of a note I read this past week that virtually no one buys anything from a Facebook ad since they are not in a buying mood when they use Facebook.  If you want to buy available videos then go to Amazon.com, Movies Unlimited or Oldies.com.  Those who did not know this, and many were without computer access, came to me and I could not help much at all. After 15 or more years I eventually told Leonard's editor to stop listing Festival Films.

However if you want public domain films, by all means come to me!  My main source of new customers these last 20 years has been those who specifically want public domain films for television, for theaters, for public showings and for Internet use.  They google "Public Domain Films" and I show up on the first page.  I use yahoo search more than google, so if you enter "Public Domain Films" in a yahoo search then Festival Films comes up #6.  Oddly, in a search for "Public Domain Movies" I don't show until the middle of the second page.

People do find me, Festival Films and some of my rare films on the Internet.  A few weeks ago I got an inquiry for "The Soundies" documentary produced by my friend Don McGlynn.  They came to me because I list some of Don's films, but it turned out I never had acquired my own copy of this film because it had never been sold on VHS or DVD.  It had only run extensively on PBS for a short time, sometimes as part of a fundraiser.

My youtube video of Christmas is Magic was found last week by none other than the grandson of actor Robert Hutton who stars in the 1953 TV episode of "Your Jeweler's Showcase."  He posted this comment after the video: It's great to see old movies like this... Robert Hutton was my grandpa, so﻿ pretty neat to see these old movies.  I asked him if Robert was religious and got this reply by email:

He wholly believed in Jesus Christ as his savior, especially in his latter years while living in his hometown Kingston N.Y.  I used to talk on the phone with him just about every weekend, some 23 yrs ago now when I lived in Virginia and he was simply the sweetest man.  He fell in his room, broke his hip, messed up his back, then passed away.  Amongst a few of his belongings sent to my mom (Jolie Louis Hutton), was a finished book about Hollywood, a box full of black and white pictures of many 'stars', and some craft-work he used to do all the time...little villages of people, horses, houses etc, in a snowy scenery, made out of match-sticks.  My family tells me that I am the only one in the family that resembles many of his physical and creative traits.  I'm a proud grandson.  By the way, I have not seen this movie before.  One of my favorites is "Cinderfella."


I got an interesting phone call just after Christmas from a woman (Barbara Merrell) who found the James Mason short "Star of Bethlehem" through a google search.  It turns out she plays an angel in the film!  Her granddaughter never believed she had appeared in anything and now they have the proof.  The children were all recruited from the church the Mason's attended: All Saints Church School.  She was in the choir that became the Heavenly Host in the film, but was singled out as the angel who had a few extra lines and a close up as shown here.

She felt James Mason mainly made the film to promote his daughter Portland, who plays Mary.  Barbara was older than Portland and so was not a close friend of hers in the church.  She recalls a big party in Mason's mansion to premiere the film to celebrity friends.  She declined speaking to the guests about being in the film.  She had a more vivid memory of attending a Saturday Matinee in a Hollywood theater, with cartoons and cowboys, when suddenly "Star of Bethlehem" began to play.  At the appropriate moment when she came onscreen her brother jumped up and screamed to everyone: "That's my sister!" 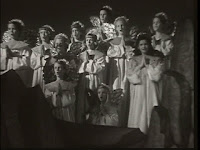 A few notes of interest about Portland Mason, who died in 2005 at the age of 55.  Her father directed her in one other short called"The Child" in 1954, which is public domain but I have no idea what it is about.  She appeared in a handful of TV shows and movies, most notably "The Man in the Gray Flannel Suit" in 1956 with Gregory Peck.  She was reportedly the most spoiled child who ever lived.  James tried to lobby with Stanley Kubrick for Portland to play the lead in "LOLITA."  We have much to thank that never happened!

Visit my websites at Festival Films and Lost and Rare.
Posted by Ron Hall at 12:13 PM