Cabin Kids - Their Rise and Fall

Whatever happened to The Cabin Kids?

My thanks to Ruth's children Ruben and Anita who contacted me in May, 2013, and filled in some of the fascinating history of this singing group that is beloved by many film fans for their appearances with Our Gang, Gene Autry, Bing Crosby and W.C. Fields.

The foremost correction is that Ruth was not related to the other four!  Ruth was born LaRuth Shegolden Chavis and her parents were friends with Mrs. Beatrice Hall and her four sons and daughters.  The popular singing quintet consisted of Helen (10) and Ruth (11) in the top row left to right, and in the bottom row left to right Fred (4) known as "Honey", Winifred "Sugar" (6) and James "Darling" (9). Those ages are approximate for 1935, which is the year of their first film.

There is some reference to their singing on the radio first in the Los Angeles area, which may be why they were cast in the Our Gang film Beginner's Luck, released Feb. 23, 1935.  In this above average Little Rascals comedy, Spanky is entered in an amateur contest whose acts include the very first appearance of Alfalfa singing with his brother and the Meglin Kiddies, 5 young girls who do not dance in synch very well and hence the humor.  The Cabin Kids harmonize to "Dinah" for less than a minute.  The youngest, Fred, seems disengaged and barely singing until his brief solo of a scat refrain.  Throughout their 16 or so films Fred seemed to get the most close-ups as he picks his ear or scratches his nose and occasionally struts a few steps that might be construed as dancing.  The reason Fred scratched in the first film is that he was just recovering from a case of ringworm!  Fred also stood out as being short and bald.

The Cabin Kids were also featured in the next Our Gang film Teacher's Beau.  They open the film by leading the class singing "Old MacDonald Had a Farm."  Alfalfa is a full gang member in his second film, and this marks the last appearance of Stymie Beard who had grown too tall and was replaced by Buckwheat as the black child who was a friend and equal of the white kids.  The Cabin Kids do not appear later in the film, only in the first school scene where they blend right in since black children were an honored tradition in the Our Gang comedies since the first one in 1922.

Their biggest film was certainly Mississippi (1935) with Bing Crosby and W.C. Fields.  They first show up two minutes into the film supporting Queenie Smith as she rehearses a number on Fields' showboat.  They accompany Fields to a plantation party where they sing an extended solo and then start "Swanee River" led by Fred but that morphs into a Bing Crosby rendition. 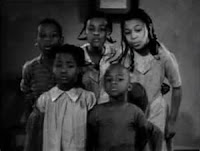 Their only other "A" picture appearance was a few brief glimpses in Hooray For Love (1935) starring Ann Sothern and Gene Raymond. Three of the Cabin Kids appear ever so briefly in the film "I'm Livin' in a Great Big Way" number with Bill Robinson and Fats Waller!  Ruth is not one of those appearing.  Look fast to even spot them, but I present the clip here as an homage to Bill and Fats appearing in the same film for the first and only time that I know of.


Educational Pictures, that only made inexpensive short subjects, starred the Cabin Kids in 11 one-reel musical shorts from 1935 to 1937.  In The Life of the Party a high society hostess is short on entertainment until she finds the five kids of the kitchen maid singing up a storm.  The black stereotypes that Hollywood hung on black adult actors carried over to Spooks (1936) where the kids roll their eyes and get scared between songs. Most of the shorts are quite rare, unseen for many years.  The only information at IMDB about Pink Lemonade (1936) is that it is directed by Al Christie and stars The Cabin Kid and Toto the Clown in his last screen appearance.

They returned to features two final times in Gene Autry westerns.  Round-Up Time in Texas (1937) is a most unusual western in which Gene takes horses to Africa and mixes it up with lions, a gorilla and natives.  The Cabin Kids are Chief Bosuto's children whose musical talent is discovered and nurtured by Smiley "Frog" Burnette.  They sing "Dinah" and assist on a few other numbers.

Git Along Little Dogies is a more traditional B-western about Gene singing on the radio and raising money for oil exploration.  Gene introduces the Cabin Kids to sing in the radio studio as "Sam Brown's Children The Cabin Kids."  They only sing one number, the delightful "After You're Gone" with Fred scratching his face and back more than singing, his odd trademark for a singing group.  Audiences must have found it amusing, or maybe not since this was the end of the line for Cabin Kid movies.  Likely Fred had a growth spurt and the older girls were no longer children in 1938.  Ruth in particular was edging up on the tall side.

So whatever happened to The Cabin Kids?  They grew up too fast, of course.  Ruth, Helen and Winifred then formed a singing group billed as the Hall Sisters.  They made three records and toured with the USO during World War-II in a segregated unit of African-Americans who performed before black troops, an unknown segment of our history that I had not heard about before.

Enjoy clips from the Gene Autry films followed by the rare 1936 short Gifts in Rhythm.


Visit my websites at Festival Films and Lost and Rare.