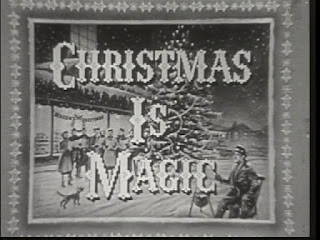 Christmas is Magic is one of the six films on our Heavenly Christmas Film Classics DVD release.  An extraordinary discovery was just brought to our attention today by a happy customer, the day before Christmas Eve.  An unmistakable vision of the face of Jesus Christ appears several times.  The face of Jesus is clear to both Christians and non-believers alike in numerous scenes.

Because the Face appears more than once, it may have been an intentional although subliminal insertion by the film's producer, Sovereign Films.  Another theory is that it is an artifact of the 16mm to video transfer process.  Yet others may claim that we altered the film to attract publicity, and I can assure everyone that is not at all the case.  The DVD was released by Festival Films over three months ago and today is the first time I and my two partners became aware of this phenomena. 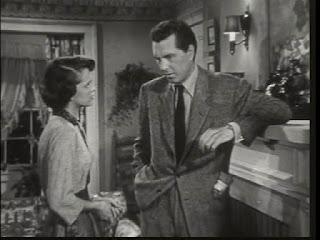 Christmas is Magic was the Christmas episode of an anthology TV series called Your Jeweler's Showcase.  It was first shown on television on Dec. 13, 1953, and may have been syndicated on 16mm prints for a few years.  Our source is an original 16mm syndication print.

A WW-2 war veteran (Robert Hutton) with amnesia gets off a train in a town he never heard of on Christmas Eve.  In the village square he meets a young widow (Frances Rafferty) whose husband was killed in the war and her 8-year-old son.  The son and man, who calls himself John Doe for lack of his real name, quickly bond and he goes home with them to wait for Santa to arrive.  The mother and son pray together in a moving scene not often found on television.  Later John Doe helps trim the tree while the widow helps him remember his past.  Miracles happen.

If indeed a Face of Jesus Christ was inserted secretly into a 1953 television show, then why has it taken 59 years for anyone to notice?  I don't have an answer.  I do have a theory as to what might happen next in this wonderful age of the Internet when social media has the power to spread unusual news at the speed of light.  Word about this sighting of the Face of Jesus might attract many viewers to see for themselves.  Interest in unexpected images of Christ is always high.  While deciding yeah or nay, coincidence or intentional, or what it all might mean, viewers will experience a profoundly moving Christmas story about love and childhood and memories and renewal.  Was the Face from 1953 intended to focus world attention on Christmas is Magic on this Christmas week in 2012?  Stranger miracles have happened at Christmas time.

We urge you to watch the film from the beginning to end first to experience the full effect of the story, then explore the Face.  Still pictures do not capture the Face of Jesus Christ very well.  It is much more apparent in the youtube video just below.  Most will see it -- eyes, nose, nostrils, beard and hair in the traditional image of Christ as depicted on the Shroud of Turin and in religious paintings.  One can see faces in almost anything, but this has symmetry, does not disappear after a few frames and is, of course, a very special face.  Look closely at the fabric of Robert Hutton's tweed suit from 14:00 to 14:25.    Once you see the Face you will spot it in other scenes both before and after.  The indication of a face could be a coincidence or it could have been woven into the fabric on purpose.  You decide.  By all means, tell your friends!  Spread the mystery. Spread the word.  Spread the joy.  Foremost, enjoy the film!

And the merriest of all Christmases to every one of you!

Visit my websites at Festival Films and Lost and Rare.
Posted by Ron Hall at 6:50 PM