Have Yourself an Ozzie & Harriet Christmas! 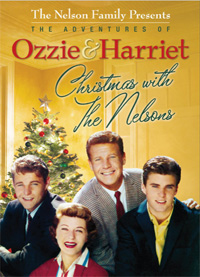 Most TV series in the 1950s and beyond celebrated Christmas in late December.  This includes comedy shows like Red Skelton, the Ruggles, Betty White, Beverly Hillbillies, Love That Bob, etc., as well as ones you would not expect Santa or gift giving to turn up in: Robin Hood, Sherlock Holmes, Annie Oakley, Racket Squad, Man Against Crime and more.  (On this last show, I sure would like to find the 1952 episode "The Day They Kidnapped Santa Claus.")  In fact Wikipedia offers a fascinating and humongous if not always accurate list of US Christmas TV Programs.

Every year about this time I re-visit the Christmas episodes of "The Adventures of Ozzie and Harriet" to  upgrade quality or remember the difference between "The Day After Christmas" and "The Late Christmas Gifts."  Among other things I learned this year: "A Piano for the Fraternity" (1960) is indeed a Christmas show I was not aware of.  That Wikipedia list claims there is a 1955 episode called "Christmas in October," although it does not appear in any lists of the shows so I am skeptical.  I do not have an acceptable copy of the 1954 "Lost Christmas Gift" and so have removed it from the episodes I offer. 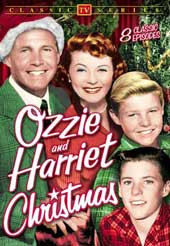 Some years Ozzie and Harriet presented two Christmas themed episodes, some years none and other years they took a filming break to repeat a holiday favorite from the past.  Most are included in my collections of Christmas TV Shows or Ozzie and Harriet DVDs.  Eight are offered for sale by Alpha Video/oldies.com where you can also buy this poster.  Alpha does not include "Piano for the Fraternity" or that elusive "Lost Christmas Gift" that I have but is too poor to sell.  Or possibly it includes "Lost Gift" mislabeled as "Late Christmas Gift."

Leaving out that questionable "Christmas in October" show, here are the ten that definitely exist and carry the Christmas spirit with family values to every generation yet to come.  They really are special so take a look if they visit your TV set later this month.

12/19/1952.  Boy's Christmas Money
Only the 12th episode made in a series that ran for 14 seasons.  Dave and Ricky (really young) take jobs in the city in an attempt to raise cash so they can buy their own Christmas presents for their parents.

12/26/1952.  Late Christmas Gifts
When Grandma Nelson's gifts finally arrive, David and Ozzie believe she mixed them up by giving Oz the sports jacket and David a dull book.  Franklin Pangborn shines as a prissy insurance salesman who lays guilt on Ozzie for not better insuring his family's future.

12/25/1953.  The Miracle
Most unusual of all Ozzie episodes with a flashback to Christmas when he was a child, wherein Rick plays Oz, David plays Oz's older brother and Ozzie and Harriet portray his parents.  This rare episode only surfaced when associate Derek Myers acquired a 16mm print.  We are currently in a project of upgrading the video via a Golden Eye III scanner.

12/24/1954.  Lost Christmas Gift
When a package containing a baseball glove for Ricky is misdelivered, the Nelsons visit a poor family and decide to bring them a wonderful Christmas.  If you didn't catch it, I'm looking for a good copy of this one.

1/7/1955.  The Fruitcake
Every year Thorny gives Oz a fruitcake for Christmas that he hates, while Ozzie gives hard candy that is equally appreciated.  Trouble ensues when they try to return the gifts to the same store clerk.

12/19/1956.  A Busy Christmas
One of the best remembered holiday shows as Ozzie commits to so many projects - buying presents, playing Scrooge and Santa Claus - that he can't find time to decorate the house.  When the show was repeated in 1964 a new epilog was shot with Rick and David's wives and kids while Rick sings "The Christmas Song."  You can watch this bonus in the video below.

12/26/1956  Day After Christmas
Christmas gifts lead to reminiscing about the good old days, but everyone is too busy to do things together anymore, until the whole family winds up at a skating rink by accident.

12/14/1960  Girl in the Emporium
Ricky and Wally take Christmas jobs at a department store to be near a cute clerk.

12/21/1960  A Piano for the Fraternity
Rick, Wally and his frat brothers acquire a needed piano while decorating for their annual Xmas party.


Meet all 8 Nelsons in this special 1964 Christmas epilog.

Visit my websites at Festival Films and Lost & Rare.
Posted by Ron Hall at 5:10 PM