The Dove Foundation is dedicated to identifying and promoting Family Films.  In 1991 Dove incorporated as a not-for-profit organization and began its work producing the first list of movies with the Dove "Family Approved" Seal.  Dove co-founder and CEO Dick Rolfe explains: "We were frustrated because we felt inadequate to make selections on behalf of our children without watching the films themselves beforehand.  And we didn't trust the Motion Picture ratings; G, PG, PG-13 and R."  So in 1990 Rolfe and several other parents started reviewing and assigning their own ratings to films.  At first they just made a laundry list of movies they liked and handed it out to friends, family and church members.

The list was such a hit they decided to expand the idea and created the non-profit Dove Foundation dedicated to advocating for families and moving Hollywood in a more famiy-friendly direction.  The Dove reviews, posted at www.dove.org, are based on traditional Judeo-Christian values.  There is a content chart and descriptions that gauge six criteria: Sex, Language, Violence, Drug and Alcohol Use, Nudity and Other. 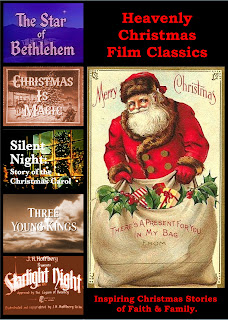 Because we are seeking wide advertising, blogger comments, retail sales by Christmas and religious websites and on Amazon for "Heavenly Christmas Film Classics" DVD, and above all because the films are indeed family friendly and make great Christmas presents, we applied to the Dove Foundation for their approval and review.  We got both!  Actually Dove reviews every movie but many like Skyfall, Flight, Man with the Iron Fists and Silent Hill: Revelation 3D are emphatically Not Family Approved!  They might very well be great films to most of us, but not for families and kids.  On the other hand Wreck-It Ralph is Dove "Family Approved" recommended for ages 12 and over.

Dove Family-Approved    Suitable for all ages

Synopsis:
This vintage holiday film collection includes six short Christmas films of a religious and spiritual nature released on DVD for the first time ever. Two tell the Nativity story, two recount the creation of the Christmas carol "Silent Night" in 1818, and the other two tell inspiring stories that take place during the holiday season.

1. Silent Night: Story of the Christmas Carol (1953) Beautifully told true story of how Franz Gruber created the iconic 1818 Christmas carol
2. Christmas is Magic (1953) Robert Hutton plays a war veteran with amnesia who is taken in by widow Frances Raferty and her son on Christmas eve.
3. The Star of Bethlehem (1956) Story of the Nativity told using the silhouette animation style of Lotte Reiniger.
4. Three Young Kings (1956) In Latin America 3 young boys dressed as The Three Wise Men carry Christmas gifts to the Mission children, stirring a crisis of community conscience over the true meaning of giving.
5. Star of Bethlehem (1954) Produced, directed and starring James Mason. A heartfelt, inventive and personal telling of the Nativity birth of Jesus story enacted by a cast of children, with Mason's daughter Portland Mason as Mary, and Jerry Mathers as Joseph
6. Starlight Night (1939) Opulent British docu-drama about the creation of the famous Christmas carol centers on a stern father estranged from his daughter.

Dove Worldview:  This collection of black and white vintage film brings to light the themes of Christmas. Two of the stories involve the beloved song of Christmas, "Silent Night." One that relays the history of its origin, how it came to be written, put to music and spread thought the world. The other of its connection to a family that inspired the song and reunited a family torn apart.

Then there are two stories that narrate the wondrous tale of the Christ child's birth. One that is a narrated reading and illustrated by shadow animation and the other is a narrated version read by James Mason and then portrayed as a play with young children in the roles of the Biblical story that is read every Christmas around the world.  The last two films in this charming collection are of miracle stories that happened in the Christmas season. One of a mother and child that meet a vet of the world and help him remember the Christmases of his past to make a rejoicing time for all involved. The other is a story of Latin America in which 3 young boys show the real meaning of Christmas in their small village.
This DVD will entertain young and old alike in the black and white format that shows many different facets from days gone by.

We are proud to award this collection the Dove Family Approved Seal for all ages.

Content Description:
Sex: Couple kiss
Language: None
Violence: None
Drugs: Man smoking a cigar; man takes a drink
Nudity: None
Other: Father disowns daughter because of the man she wants to marry