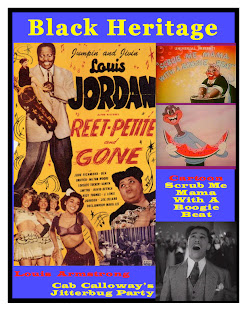 February is Black History month.  Films are a great way to explore what can best be described as lost history because there is a library of all black-cast films going back into the 1920s that are rarely seen other than on Turner Classic Movies, yes, usually in February.  Who picked the shortest month for this tribute?  Only a few films before the 1950s are big Hollywood productions, films like "Hallelujah" (1929), "Stormy Weather" (1943) and "Cabin the Sky" (1943).  An exception was the 1933 independently produced "Emperor Jones" with Paul Robeson and a series of Robeson features largely made in England where he acted as the star or on an equal basis with white actors, films like "Song of Freedom" (1936) and "King Solomon's Mines" (1937).

Many black films were independent, inexpensive films often made by black directors for showing in all-black cinemas across the country.  Many are musicals that highlight jazz greats like Cab Calloway, Lena Horne and Louis Jordan.  3 minute musical Soundies preserved many more performances by the Mills Brothers, Louis Armstrong, Nat King Cole, The Three Chefs, Bill Robinson, Count Basie, Billy Eckstine, Fats Waller and many more.  It was the dramatic films that gave a real peak at black life on the street, in night clubs and in family settings.  Books have been written and documentaries made.  I don't pretend to be an expert, but I am fascinated by these powerful, moving slices of life. 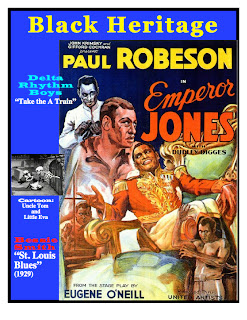 Every year I plan to promote the films early and reach a new audience in schools or cable TV, but usually February creeps up on me and it's too late to do much.  This year I started this week, in early November, tuning up five Black Heritage programs that combine features, cartoons and musical shorts along the Café Roxy philosophy.  Each has its own movie poster that can be used to promote a theater or film society showing or put on a website for television.  The shorts precede the feature, so just run the DVD for a balanced and entertaining show.

I made an introduction to run before each film, that you can see in the video below.  The onscreen text says: "In the 1930s, '40s and '50s many films were made with all-black casts, to be shown in "blacks only" movie theaters. Although largely forgotten, these minor classics reflect a culture and vibrant people that deserve reappraisal. They also preserved classic jazz numbers by such immortals as Cab Calloway, Louis Armstrong, Duke Ellington, Lena Horne, Bessie Smith, Louis Jordan and Ethel Waters. Some caricatures and racist jokes are remnants of a regrettable past that society has moved far beyond. They are part of history that should be learned from rather than erased, so as never to be repeated." 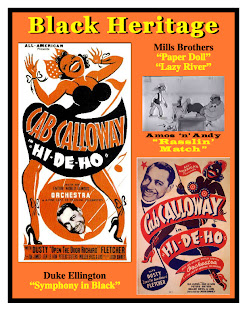 I am not sure this brief mention of racist jokes is enough to prepare someone who has not run into much of this due to censorship or simply never seeing the films.  How many under 30 have ever seen a blackface number or knows what one is?  Black stereotypes are perhaps widest spread in cartoons.  The most common depictions are that African-Americans are lazy, scared of everything especially spooks, eat watermelon and fried chicken all day and they got rhythm.  Elements of this appear in the 1941 Walter Lantz cartoon "Scrub Me Mama with a Boogie Beat"

Lazy black folks in Lazy Town (Pop. 123½) are napping and attracting flies. They are so lethargic they even fight in slow motion. Then a riverboat arrives with a red hot mama on board and she quickly has everyone moving to a Harlem boogie beat, dancing, scrubbing clothes, and eating watermelon. As the boogie-woogie comes to a close, Mammy hoists her skirt. Her big bottom reads "The End."

The music is lively and the cartoon is fun, but should it be shown cold to an audience or does it need an introduction today to explain that the film is a product of a different era, stereotypes are demeaning and unacceptable today, etc.  Watch the excerpt I put in my introduction and please let me know what you think.  Should I change my video intro?

In general I don't like to censor anything.  I and my lost and rare partners ran into a dilemma with the 1921 Larry Semon film "Golf" when we released GOLF MANIA DVD.  One sequence has a black caddie quaking in his shoes from a moving bag (skunk inside), his feet frozen in place.  It ends with him turning white from fright.  I felt the golf release was aimed at golfers who might be turned off by a joke out of left field that is not funny, only a sad reminder of what some film makers thought was once funny.  So it is not on our DVD, but you can see it right here:


Visit my websites at Festival Films and Lost and Rare.
Click here to see the Black Heritage Programs.
Posted by Ron Hall at 3:36 PM