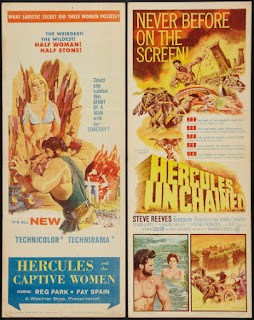 In the past week I have had three fortuitous conversations in the use of public domain films along the lines of the Café Roxy credo -- show films anywhere and anytime and be creative.  Is that my credo?  It sounds good anyways.  Anytime.  Any place.

(The Hercules poster will become clear in due course.)

The first was seeing an actual TV schedule of how good customer RCN/TV was integrating PD films in the Pennsylvania area with local programs of gardening, cooking, high school football games, the Phil Stahl Show, Jolly Joe (?!) and others.  I wonder what Midnight Mausoleum is?  A Friday afternoon block consists of one TV show after another in this order: Roy Rogers, Robin Hood, Beverly Hillbillies, Petticoat Junction, Ozzie and Harriet, Jack Benny, Date with the Angels, Life with Elizabeth, Mr. and Mrs. North, Man with a Camera and One Step Beyond.  Then local football.  Please peruse their schedule.

I preach at my Café Roxy website how any bar or restaurant or coffee shop can show public domain films as background filler or scheduled shows.  I have visited a few bars and discussed the idea and left free samples.   No takers in the bar scene, but I am still convinced that if someone showed 3 Buster Keaton shorts every Wednesday they would be swamped after word got around.  They could run them silent and re-run the same three again and again.  I now understand that bars simply don't have the time to fiddle around with a DVD player.

Along came a new company last week with a new idea.  I will keep their name and midwest location private.  They are already broadcasting local high school football in bars and grills via a live and scheduled feed.  They plan to add PD content when there aren't any live sports.  I sent a Lotsa Laffs! and free Roxy Sampler to get them started.  So they do all the work and the bars just sign up at a low fee.  Additional expansion calls for streaming to residential and additional restaurants, bars, grills, etc.  Now if I can only find a sports-free night where they can try my Buster Keaton night.

The most interesting call came out of the blue from a man with a foreign accent who wanted to buy all 29 of my cartoon DVDs.  After saying fine, great and assuring him they were all in the public domain I asked what he wanted to use them for.  This is a tricky question as it may sound impolite, so I quickly added that he did not need to tell me, his use would not change the price and he could use them for anything he wanted to.  Price does depend on format since BetaSP masters cost a lot more.  I also need to discourage users who want to add a new sound track or change the films in any drastic ways that might infringe on image rights of the actors involved.  For instance you can't add a funny voice track that has John Wayne or Cary Grant swearing.

So I asked judiciously "Why do you want all my cartoon programs?"

I did not expect: "To give away in newspapers in Greece."

That idea explains itself -- give away a free DVD each week to encourage newspaper subscriptions.  That's a new one on me, though it has occurred to me that companies like micro-wave popcorn could give away DVD freebies that would only cost pennies to mass produce.  We talked a bit more and I gave him the idea that 6 or 7 cartoons on one DVD would be a nice bonus rather than all 17 Betty Boop cartoons that come on my first cartoon volume.  That way they could stretch 29 cartoon DVDs into 52 or so of their releases.  They could also mix up the cartoons with a single disc containing a Betty Boop, Popeye, Tom and Jerry, Fleischer Color Classic, Little Lulu, etc.

When I shipped off the cartoon order I included a later idea -- add a serial chapter to each disc to really hook newspaper subscribers.  Serials have worked in newspapers since the 1800s.  They still work on TV in the soaps and shows like "24."  Zorro and Flash Gordon can grab an audience today.

In Greece.  And that Hercules poster up above?  Old Herc is greek.

Visit my websites at Lost & Rare and Festival Films.
Posted by Ron Hall at 10:20 AM