Public Domain Movies For Everyone! 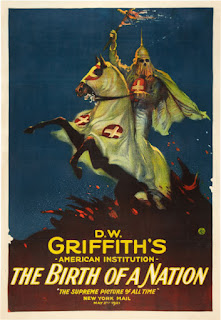 Festival Films was founded in 1976 to sell public domain films to colleges and libraries on 16mm film format.  Public Domain Films & TV Shows are ones that are no longer protected by copyright.  Anyone may do anything they like with them -- copy them, sell them, show them on TV or in movie theaters or stream them on the Internet.

In those primeval times before home video, colleges with film history courses needed to rent the same classic films year after year, films like The Great Train Robbery, Birth of a Nation, Potemkin, Cabinet of Dr. Caligari, Grand Illusion and later films by Luis Bunuel, Akira Kurosawa and Ingmar Bergman.  Belive it or not, for many years Seven Samurai, The Seventh Seal and Viridiana were in the public domain in the USA.  Film history classes were happy to buy new prints since they often rented scratched and splicy prints that were missing scenes or would break down in the middle of a showing.

Time out!  Like many of my rambling blogs, I started this one to discuss various markets where public domain films are alive and well today.  I see I won't get there.  Next week, for sure.  Today I delve a bit into the history of Festival Films.

I had started collecting 16mm films in 1968 and attended my first Cinecon that year (#4) in Hollywood where I met teenage film fan Leonard Maltin and producer Ed Finney who had discovered Tex Ritter.   I also met Society for Cinephiles founder Sam Rubin and early 8mm and 16mm film dealers like Murray Glass, who issued a rental and sales catalog of films.  A bit later I made contact with Tom Dunahoo of Thunderbird Films and Bob Lee of Griggs Moviedrome, Celebrity Films, Niles Films and others who issued classic films in catalogs.  They sold new lab prints, legally, and as many as anyone wanted, which is how I learned about public domain films.  Because they sold to the 16mm film collector market, their prices were reasonable. 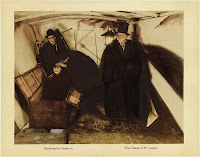 Parallel to these 16mm discoveries in the 1970s, I ran a film society on the University of Minnesota campus 1971-1974.  This is where I met my future wife Chris when she came to make audio tapes of Marx Bros. soundtracks.  She came extra early so she could set up her recorder in the front row.  I had a partner, R. Dixon Smith, and we alternated driving each other to the University campus, me a Volvo station wagon and he in his Volkswagen bug.  We must have averaged 100 bodies every Friday and Saturday where we only charged $1 admission for the first years.  Attendance was good since none of the older films were shown on Twin Cities TV and home video did not arrive until the 1980s.

We called it the Xanadu Film Festival after the poem "In Xanadu did Kublai Khan a stately pleasure dome decree..."  The name later morphed into Festival Films.  Xanadu Films?  Might have been a better name, but that's old history.  The most memorable shows were 3-hour Cartoon marathons.  We also caught the tail end of an incredible era where one could rent Casablanca and every other Warners classic from Budget Films for only $35 plus shipping.  I don't think we were supposed to advertise or show them in public where admission was charged, but then no one told us to stop and Budget did not seem to mind.  I also bought/collected prints that I could show in the film society.  Buster Keaton was a big hit and all of his two-reel shorts were in public domain.

It was during the film society days that I became aware that colleges needed new prints of the 16mm films they rented every year.  I recall attending a home screening of some film professor who had his own silent, dupey print of Caligari, and it was pretty dreadful.  The Griggs print was much better and had an orchestra score.  This led to the idea that I could put out my own catalog that gathered together the best quality prints from various labs of films that would appeal to film history classes.  I also discovered the labs would give me a discount for selling multiple prints of the same film!  The only hitch was they needed to be paid in advance while colleges paid by purchase order net-30 ... or longer.

In 1976 raw film stock from Eastman Kodak was dirt cheap compared to now.  2 cents a foot vs. 20 cents now.  (I made that up without checking but it may be close.)  Blackhawk Films was still selling a Laurel and Hardy two-reeler for $52.  I recall buying new color cartoons for $20 in the 1970s and selling them for $35.  So the cost for a school to rent Potemkin was maybe $35 from Films Inc. but to buy a new print from my 1977 catalog was only $139, and they could keep it year round and show dozens of times before the print started to wear out. 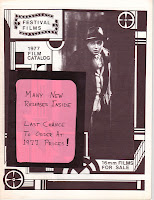 This was long before the Internet so I needed to buy a group of mailing labels to colleges that had film courses.  Chris and I got married in 1976 and she helped with the first catalogs, ordering, shipping and the whole shebang.  I was still working in the prop department at the Tyrone Guthrie Theater until 1981, so Festival Films was planned as a sideline hobby-type business now that I was no longer running the film society.  We mailed out the first printed catalog in 1976 (dated 1977) with a cover photo of Peter Lorre in "M".  The idea worked and quickly took off.  Had I been trained in business or sold films full time, I might have done really well until home video supplanted 16mm film libraries in schools by the mid-1980s.

A year or two after we started Festival Films, another company started doing the same thing -- selling 16mm classics to colleges.  I think their name at the beginning was Reel Images, or at least it turned into that.  One of the partners was a friend, Marty Kearns, who we visited in Hollywood when he was in full swing working out of a rented building with at least 3 employees busy putting films on reels and shipping them out.  His partner was Jon Sonneborn who had trained in marketing and knew how to reach every college and library in the country who had a film collection.  That day I saw how much bigger my business could have been had I aggressively marketed it from the start.

Sales of 16mm films began to taper off by 1985.  Colleges were shifting to VHS videos, which in the 1980s cost quite a bit.  Anyone remember prices of $59.95 or $79.95?  I went through a period of selling VHS at high retail prices to the same customers that had been buying 16mm prints.  This included sales of ALL FILMS that were legally issued by the copyright owners.  Most films are of course still copyrighted today.  Colleges wanted to show Citizen Kane to their students and they were legally able to if they bought a commercial video.

There was an exclusion in the copyright laws that made it legal for schools to show these copyrighted films in the classroom when a film history teacher put the film in context and discussed it afterwards.  This is different than kindergartens showing Snow White, etc., as entertainment or baby sitting, which was widely done but not really legal at the time.  Canadian schools did not have the same exception law and needed to buy videos with public showing rights attached, and I never got into that.

Next week I will talk about Festival Films shifting back into public domain films full steam, let's say around the year 2000 for simplicity, and the many venues that are happy to use them today.

Wondering which films are in public domain???  Visit my website at Festival Films.  Find out about current and upcoming rare films at Lost & Rare.
Posted by Ron Hall at 2:14 PM