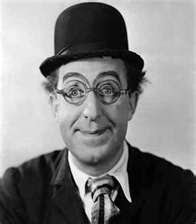 It's easy to love Ed Wynn (1886-1966)!  He's just such a friendly guy and often hilarious.  Ed began his career in vaudeville in 1902 and rose to star with the Ziegfeld Follies by 1914.  During The Follies of 1915, W.C. Fields allegedly caught Wynn mugging for the audience under the table during his "Pool Room" routine and knocked him unconscious with his cue.  Wynn wrote, directed, and produced many Broadway shows in the subsequent decades, and was known for his silly costumes and props as well as for the giggly, wavering voice he developed for the 1921 musical review, The Perfect Fool.  (Thanks to Wikipedia for that info!)

Less known is that in 1922 Ed became the first big-name vaudeville talent to appear on radio.  The single broadcast in 1922 was over WJZ in Newark, and Ed was so traumatized by mic fright that he refused to try again until ten years later when Texaco offered him a large sum of money in 1932.  Ed began broadcasting his "Texaco Firechief" shows on Tuesday nights.  Like many vaudeville performers who turned to radio that decade, Wynn insisted on playing for a live studio audience wearing a colorful costume with a red fireman's helmet. 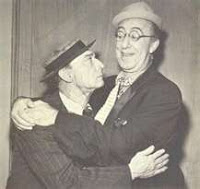 His early film excursions were not as successful, though they would be fascinating to see today to figure out why.  In the 1930 Paramount comedy Follow the Leader Ed is teamed with Ethel Merman and Ginger Rogers, while in The Chief (1933) he brings his radio character to the screen.

Ed Wynn is chiefly and fondly remembered today for his TV and feature film work late in his career, such as Requiem for a Heavyweight (1956, Playhouse 90), The Diary of Anne Frank (1959), Mary Poppins (1964) and dozens of TV guest appearances.

My chief interest today is in his pioneering television work as the first vaudevillian and first comedian to host TV's first Hollywood-produced variety program -- The 1949-1950 Ed Wynn Show.  Ed won one of the first Emmies in 1949 while opening the TV door for Milton Berle, Jackie Gleason, Martin and Lewis, Abbott and Costello and everyone else.  The show featured the first television appearances of The Three Stooges, Buster Keaton, Lucille Ball, Joe E. Brown, Dinah Shore and literally dozens more.  Since all TV network shows in 1949 were produced in NYC, this was the first chance for many big names to appear on live TV.  A list of guests in all 39 shows can be perused at tv.com.

Although broadcast live on the west coast, 16mm kinescopes were made to show in the East and Midwest.  Some prints survived and have been issued on video, while others are (optimistically) waiting to be discovered.  Here are the episodes that I am aware of currently being offered: 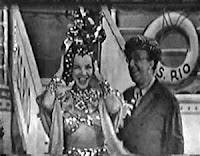 In addition, a long-time colleague transferred these episodes from kinescopes many years ago, but they are currently in storage and difficult to access:

If you know of any others out there, please advise, since this only amounts to 15 of the 39 episodes.  We are hoping to include the Lucille Ball episode in our first volume of Primeval Television, currently in preparation for the Lost & Rare series.

Any film clip of Ed Wynn bringing vaudeville to TV will communicate his shtick and appeal better than any words.  From episode # 5 here is a touching and illuminating tribute from Ed Wynn to Victor Moore.  Victor is a wonderful character comedian who shines in Swing Time, It Happened on Fifth Avenue and many more, but in 1902 he was the absolute king of vaudeville....

Ed Wynn had lots of heart.  In 1958 Ed made a pilot TV show for a situation comedy to also be called "The Ed Wynn Show."  There is a list of 16 episodes, but I am not convinced they were actually produced and broadcast.  Here is an excerpt from the Pilot that I currently offer in Lost & Rare TV Pilots.


Please visit my websites at Lost & Rare and Festival Films!
Posted by Ron Hall at 11:49 AM