On the Road (again) with Bing & Bob 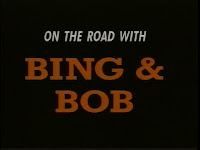 Beyond legendary entertainers, Bing Crosby and Bob Hope were very generous, patriotic Americans.  They filled their days with a variety of work and play.  A typical week (1930s thru 1950s) involved rehearsing and performing a radio show, filming movies, making personal appearances, filming TV shows, playing golf, visiting the race track and in Bing's case making records.  Still they found time for worthy causes like entertaining the troops, government public service films, hosting the Oscars, religious films and honoring golf caddies!  Since they were friends they often teamed up for charity.

My friend since 1970, Bob DeFlores had a special love for vintage music and Bing Crosby.  He collected rare Crosby films and was privileged to visit Bing in 1977 six months before Bing's untimely death.  Years later this meeting led to an association with Kathryn Crosby and several trips through Bing's basement film and audio collection to help evaluate and preserve other rare films.

In 1994, Bob and I slowly realized that he had many rare films that happened to be in the public domain, and I had a video company that could sell them.  We put together a 90 minute collection of obscure Bing Crosby/Bob Hope shorts, called it On The Road With Bing and Bob and then looked around for Bing Crosby fans.  They were not hard to find!  At the time various fans supported two regular magazines packed with photos and information, plus a monthly newsletter.  The sumptuous and informative BING magazine by the International Club Crosby, edited by Malcolm MacFarland and Greg Van Beek, is still published 3 times a year.  Read all about the magazine and join the club at the ICC website.

So Bob and I issued the VHS video in 1995 and were widely publicized in the Bing Crosby magazines, which resulted in over 200 sales.  Five years later we offered the same films on better quality DVD for another round of sales.  We also issued everything we had about Bing Crosby that happened to be in the public domain, such as Bing's Mack Sennett Shorts, the 1957 Edsel Show, Bing Crosby Cavalcade and more.

About four years ago I arbitrarily stopped selling the films because we had reached all the Crosby fans and Bing Crosby Enterprises was starting to produce their own music and film projects.  Be sure to visit their official website.  However, since I now sell on Amazon.com where you can buy it now, I thought I would reissue our first release to see if Bing and Bob fans might find it there.  All of the films are in the public domain, they have not been chosen by Bing's estate for DVD release and many are still quite rare.  I added three clips as noted in the list below.

Theatrical Trailers to Road to Singapore, Road to Zanzibar, Road to Morocco, Road to Utopia and Star Spangled Rhythm.

The Road to Home (1945) Bing and Bob caution sailors not to jump ship at end of the WW-II as they reminisce about their Road pictures.  Who even knew the armed forces had this kind of problem?

Command Performance (1944) Bob Hope, Jerry Colonna, June Allyson, Gloria De Haven and Francis Langford entertain the troops.  Bob hosted over 40 of these variety shows that were sent to the troops during WW-II.

The Fifth Freedom (1951, Color)  Bob Hope, Bing Crosby, Perry Como and Arthur Godfrey remind us of our American freedom of choice.  On the surface a patriotic film about american freedoms, but everyone smokes Chesterfield cigarettes!  Contains some great small-town Americana scenes from 1951.

You Can Change the World (1954)  Bing and Bob join Loretta Young, William Holden, Irene Dunne, Anne Blyth, Paul Douglas, Rochester and Jack Benny to hear Father Keller tell how all of us can help change the world for the better.  Bing sings “Young American" in this episode of The Christophers TV show.  We traded our excellent copy to The Christophers in 1996 in exchange for their film "Faith, Hope and Hogan" that is included in the September release Golf Mania.

Excerpt from The Edsel Show (1957)  Frank Sinatra joins Bing on a musical road tour of the world until they run into old ski nose himself.  This is not a public service film, but continues the theme of rare Crosby/Hope "Road" films, this time with Frank subbing for Bob.  (Newly added to this video release.)

Honor Caddie (1954)  Color.  Bing and Bob in an excerpt from a public service short honoring golf caddies.  (Newly added to this video release.)

The Road to Peace (1949)  Bing joins Ann Blyth in an inspirational plea for world peace.  They sing “When Irish Eyes are Smiling."  Added last to the disc since the message goes on a bit long!

These films are highly entertaining today.  The following clip from "You Can Change the World" shows Bing Crosby, Jack Benny, Father Keller and Bob Hope's phoned in contribution.

You can purchase On the Road with Bing and Bob directly from Festival Films right here!

Visit my websites at Festival Films and Lost and Rare.
Posted by Ron Hall at 12:38 PM