I have a new website: lostandrare.com and video line.  Please explore, watch lots of video prevues in our first two releases and have fun.   Each volume strives to include films that die-hard film fans have never heard of or seen, or have not seen in good quality, or in color, or ... you get it.  How did this all come to happen?

I have been working with two film enthusiasts and public domain experts for some years, who were aware of each other through a common link -- me -- but had not been in touch.  First is Bob Campbell, the producer of the hit PBS series "Matinee at the Bijou" in the 1980s.  The show recreated a Saturday Matinee with a serial chapter, cartoon, short subjects and exciting matinee "B" features like a mystery, Roy Rogers or Dr. Christian.  The series was an incredible hit that initiated many young film fans into "old" movies, fans who remember fondly and have clamored for more ever since.  Bijou ran for five original seasons on PBS, plus re-runs for years after.  You may recall the nostalgic theme song by Rudy Vallee.  For more info check out The Bijou Blog.

I had contributed one film back then -- One Frightened Night -- and am listed in the credits for season 4, but had no contact with Bob at that time.  Through a mutual friend Bob and I were introduced about 6 years ago and have been working since on various projects, one of which is a revival of Bijou in Hi Def.  Much more to say about recent developments soon when we have definite news to report. 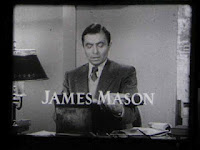 The second associate is Derek Myers, who provides public domain films and TV shows to channel WGGS-TV in Greenville, SC, and to sister station WATC TV-57 in Atlanta, where viewers enjoy Roy Rogers, Bonanza, Beverly Hillbillies, Dragnet and more.  Derek loves to find original 16mm film prints and make his own transfers.  He has quite a collection of My Little Margie, Four Star Playhouse, Ozzie and Harriet, Judge Roy Bean (black and white) and many more.  We started trading films and information and have sold some video masters to companies that have issued them on DVD.

The final partner in the Lost & Rare team is producer/editor Peter Bedell, an associate of Bob's in Medford, Oregon, who authors the DVDs and also designed the box cover logo with film strip and vintage TV and the animated Festival Films and L&R intro in the video below.

In 2011 Derek acquired a rare spiritual Christmas film Star of Bethlehem in which James Mason and his family relate The Nativity (with a cast of children).  I discussed this a year ago in a previous blog.  Rather than sell the film to some other company, we got the idea to release it ourselves on DVD along with other Christmas films not on the market.  In February of this year Bob Campbell was sorting through films he had acquired in the 1980s for Bijou but had not used, or forgotten about or never even watched.  Many were quite fascinating -- Rare, Forgotten and Lost but now Found.  Hmm ... 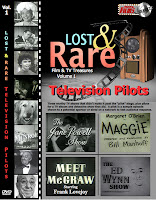 Bob wanted a few transferred from 16mm to video and I said Derek could do that.  The first film was the 1961 TV pilot for "Jane Powell Show" so Bob could give a copy to Jane Powell.  Everything suddenly fell into place.  Bob had another pilot no one knows -- Munroe.  Derek had a Margaret O'Brien pilot called Maggie.  I suggested that one of Derek's obscure TV shows Meet McGraw had started as a 1954 episode of "Four Star Playhouse" and so was a kind of TV pilot since it turned into a detective series starring Frank Lovejoy in 1957.  I added the 1958 Ed Wynn Show to the mix as it had always appealed to me because Ed addresses the audience/sponsors at the end in a direct appeal to sell the show.  It turns out the cast of Munroe made a similar appeal.  5 pilots = 1 DVD release called "Lost and Rare TV Pilots." 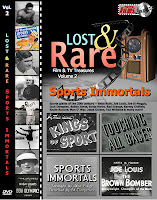 Bob also had on film a rare 1939 baseball film -- Touching All Bases -- that I discussed a few weeks ago.  With much effort one can find this for sale on the Internet, but it is not promoted, not on view at Youtube and so is pretty much unknown or "Lost" to baseball fans because they do not know about it.  This 1939 celebration of Baseball's Centennial is simply fascinating.  We added four other vintage sports shorts from the Bijou collection and call our second volume Sports Immortals.  We will promote it  online, sell through Amazon, Movies Unlimited, etc., and also pursue educational sales.  Sports Immortals is on sale now at the new Lost & Rare website.

We are excited about upcoming rarities for 2012 release, such as:
And here are previews of each!


If you have a lost or rare cartoon, short, newsreel, TV show, war documentary or feature on film, please contact us. We may be interested in licensing your content for our series!
Please visit my original Festival Films website offering public domain Hollywood films for all purposes, and the new www.lostandrare.com website.  Thanks from Ron Hall!
Posted by Ron Hall at 1:45 PM