My Festival Films website averages about 110 hits a day, and of those 77% are new visitors (info thanks to google analytics).  I do not advertise DVD sales to the general public, though I will gladly sell to anyone who happens to find me.  New visitors usually find me by doing an Internet search on "Public Domain Films."  A Google search just now puts me at #9 and Yahoo search on their first page in the #8 position.  I do not lobby to move up the list and believe I hold that coveted first-page position because I have been around so long.  The exact Yahoo listing is:

The public knows about Public Domain and so they search me out.  This results in weekly email or phone inquiries that start: "I just bought an old movie theater and am thinking about...." or "I'm starting a TV station and...."  That latter inquiry is not a joke.  I have recently entered a relationship with a TV station and I don't even know their name or location, but the owner is friendly and wanted 3 hours of public domain films a day and wants me to program them.  More about all this later if I get a link to their website.  Early results: "It seems the programming you have previously sent has been popular with our audience. We are getting positive feedback."


One new wrinkle I came up with for this station was an extended Saturday Matinee.  This involves running one of the Matinee Programs every Saturday, which with TV commercials comes to two hours, but then adding a second matinee feature to flesh out a 3-hour time slot.  The first Matinee feature that accompanies Chapter #1 of "Radar Men from the Moon" is "The Most Dangerous Game," and the logical second feature is a 53 minute Roy Rogers western.  In week 4 when the feature is a western -- John Wayne in "Hell Town" -- I sent an East Side Kids film (Kid Dynamite) to go with it so as not to have two westerns.  If they load up the 3 hours with commercials, and I have no way of telling if they do, then they can eliminate one of the cartoons to create more ad time. 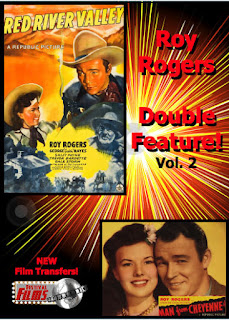 Thinking of Roy Rogers, I recently obtained a number of new film transfers of his films (thanks to partner Derek Myers) that I simply did not have decent quality on previously, and I put these together into 4 double features for sale on Amazon.com.  As I say in a brief introduction I added: "You can finally see what's going on in all those night scenes."  Will advertising "New Film Transfers" resonate with fans who have been looking...?  I think perhaps it will at $12.95.

Red River Valley is a key Roy western as it is his first "modern" western set in the present with cars alongside horses.  It is also his first film with future sidekick Pat Brady, who made quite a comic foil to Gabby Hayes in this period.  Both films feature lovely Gale Storm as second leading lady.  First lead goes to a comic lady, Sally Payne, who goes for Pat while Gale and Roy connect for the fadeout.  Roy probably endeared himself to his young boy fans by rarely kissing in his movies, but in the second film, Man from Cheyenne, he kisses both Sally and Gale in the first five minutes.  What are you waiting for?  Go watch these films!

The Hollywood Theater in Dormont, PA, has been getting public domain programs from me for a year and mixing them in with shows they lease from others.  They added a little extra fun when they ran my 12 Nights of Horror and flew in a skeleton during House on Haunted Hill and recreated the body-less woman onstage during Brain That Wouldn't Die.  Last week they requested a special program based on "Lotsa Laffs" except with complete shorts.  I like filling special requests because if a show will work one place, then I can offer it to others on my website.

For those unfamiliar with programs offered by Café Roxy, or for a quickie reminder, I make a poster for every show.  The poster can be taken right off my website and either printed or the jpeg image can be used on your own website.  The empty rectangle is where you can put info about theater name, address, date and showtime.  I made the poster shown up top for the Dormont.  Here is how they are advertised in the Comedy section of fesfilms.com:

Lotsa Laffs! 105m. Hilarious shorts and cartoons in one giant laff-fest for movie theaters or Internet streaming. "Our Gang Follies of 1938," W.C. Fields in "The Dentist," 3 Stooges "Disorder in the Court" and Abbott and Costello "Who's On First?" -- plus cartoons "Arctic Giant" with Superman, Betty Boop in "Is My Palm Read?" and "Popeye Meets Ali Baba" and more! Check out these additional short comedy collections of Lotsa Laffs!

These are not new films.  They are not rare films.  But they are hilarious and good-to-go for movie theaters who want time-tested programs all put together for them.  Your audiences will thank you, and more importantly they will laugh loud and long!
Posted by Ron Hall at 10:46 AM