Magnificence at the Paramount!

Just one week ago today, and all day from 1:30 in the afternoon until 10 at night, my wife Chris, son Jeff and I were experiencing the single most memorable and unforgettable movie event of my life: Napoleon at Oakland's Paramount Theater.  I can't really speak for them, but Jeff was impressed and Chris was bowled over by the live 43-piece orchestra conducted by her hero Carl Davis, whose score overflowed with movements by her favorite composer, Beethoven.  We sat in the center section of the lower balcony.  Our view of the screen is shown in this photo that Chris took before the performance.  No photos were permitted during the show. 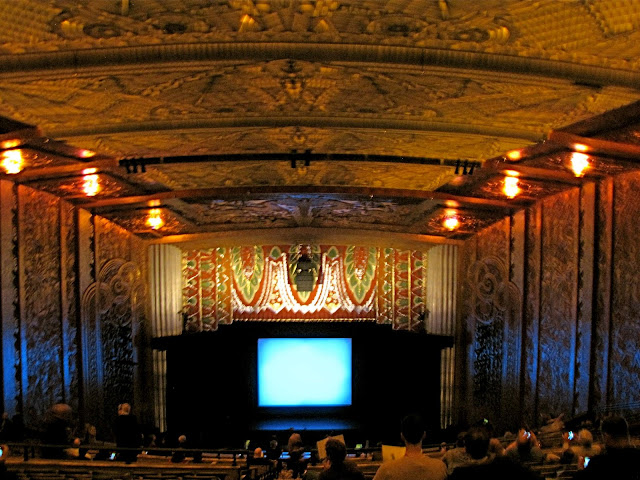 The dark squares to the right and left of the lighted screen are curtains hiding the two screens revealed during the last 20 minutes for the grand "tryptic" finale similar to Cinemascope or even Cinerama years later.  The audience gave a huge ovation when the curtains opened up.  Two temporary projection booths were installed in the back corners of the main floor to provide the additional 35mm cameras needed to project on the added screens.  All 3 projectors were synched so that horses could ride from the left screen thru the center and out the right side.  The variety and creativity of the 3 screens was amazing.  In some scenes the 3 images formed a single wide shot like my picture at the top, while in others 3 separate scenes played at the same time, or the right was reversed and repeated on the left while the center was different.  My favorite part was when Napoleon stood on a hill envisaging the future in the clouds, with shots of revolving globes and Josephine close-ups.  In the very last shots the 3 screens were red, white and blue duplicating the French flag as "La Marseillaise" played once more for a rousing conclusion.

Some early promotion of the event:  "The Brownlow restoration, produced with his partner Patrick Stanbury at Photoplay Productions in association with the BFI, is the most complete version of Gance’s masterpiece since its 1927 premiere at the Paris Opéra.  The SFSFF screenings also mark the U.S. premiere of the renowned orchestral score, written over 30 years ago (and twice expanded since), by Carl Davis, who will conduct the Oakland East Bay Symphony." 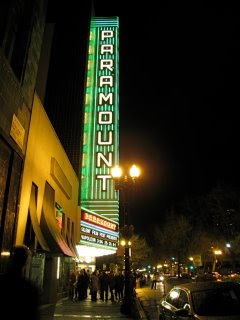 "The spectacular presentation at the 3,000-seat, Art Deco Oakland Paramount will be climaxed by its finale in “Polyvision”—an enormous triptych, employing three specially installed synchronized projectors, that will dramatically expand the screen to triple its width. The logistics and expense of screening "Napoleon" properly with full orchestra and special equipment have made it nearly impossible to mount. Gance’s "Napoleon" hasn’t been screened theatrically in the U.S. with live orchestra for nearly 30 years and there are no plans to repeat the SFSFF event in any other American city."

The screening we shared on Saturday, March 31, 2012, was essentially sold out.  The orchestra played for 5 1/2 hours of film divided into 4 segments.  The event will never be repeated in the USA, or not with Carl Davis conducting.  (We heard the cost for the orchestra over the four shows was $750,000!)  After the first two parts there was a long break for dinner.  Nearby restaurants were packed.  A number of friends had come from long distances just to see the film.  I have never gone anywhere before just to see a single movie.  I may not do so ever again.  No regrets.  Only memories.  The Paramount Theater in Oakland is king!  Chris took this photo after the show as the audience hesitated to leave.

Jeff and his wife Amanda live in San Francisco so we visited a few more days with them.  Among other activities we enjoyed the amazing Walt Disney Family Museum at the Presidio, which I highly recommend.  But all I can think about looking back is Napoleon, the film and the event.

Visit my website at Festival Films.
Posted by Ron Hall at 10:43 AM