Here's Something You Never Heard Of...! 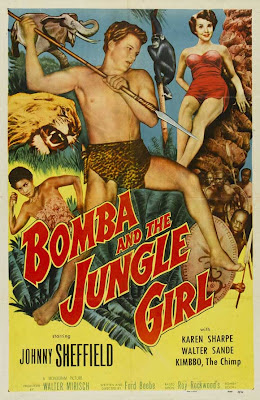 When Turner Classic Movies paid a fond farewell yesterday to the final "Bomba, the Jungle Boy" movie, Ben Mankiewicz informed us that star Johnny Sheffield tried to continue with his character in a TV series.

The precocious Sheffield, of course, first appeared as Boy in the 4th Johnny Weismuller Tarzan film "Tarzan Finds a Son" in 1939, and was loved by audiences around the world.  After 8 Tarzan movies, the teenager went on to star in his own jungle movie series. In 1949, he made "Bomba, the Jungle Boy" with co-star Peggy Ann Garner. In all, he appeared as Bomba 12 times ending in 1955 with "Lord of the Jungle."  He then made a pilot for a television series, "Bantu the Zebra Boy," which was created, produced and directed by his father, Reginald Sheffield. Although the production values were high compared to other TV jungle shows of the day, a sponsor was not found and the show was never produced as a weekly series.

1955 was also the year TV saw "Jungle Jim" with Weismuller and "Sheena, Queen of the Jungle" starring Irish McCalla.  Another jungle series, "Ramar of the Jungle," had already played out in two full seasons from 1953-'54, which explains why audiences may have had all the jungle shows they wanted, or at least why no sponsor was found to produce Bantu.  Perhaps they should have licensed the "Bomba" name since "Zebra Boy" is rather ludicrous.  Bantu gets around by riding a zebra, which does not look that speedy, but the wild animal stock footage is rather impressive. Naturally they never appear in the same shot.  You can watch the opening of the pilot show HERE.

I had never heard of Bantu before, but I am here to talk about TV pilot films since I am on the verge of releasing my own DVD of 5 Pilot Films in a new "Lost and Rare" series.  I will discuss them in detail when the release is ready for sale in mid-April.  Four of them star famous actors, but the fifth I would venture to say no one has ever heard of before.  It is not listed on the IMDB or under screen credits for any of the "stars" and was never shown on TV like some TV pilots were shown on "The ComedySpot."  (Summer replacement series for "The Red Skeleton Show" during their annual hiatus from 1960-1962, this series featured unsold pilots for comedy series as well as reruns from other comedy anthology series.)

So with great fanfare, presenting for your viewing pleasure and mystification, the one and only ... 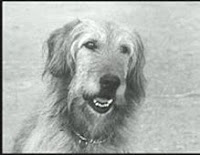 Munroe is a dog -- a lovable army mutt who doesn't quite make it in the K-9 corp at an army base.  The actors who were not able to add this show to their credits are Guy Marks (Joey Bishop Show), Jan Stine (never made it in various TV shows 1959 to 1966), Joan Freeman (TV Bus Stop), James Flavin (in films and TV 1932 to 1976!) and guest starring Sig Ruman, who steals the show as a lion tamer.  The plot: Munroe chases cats.  To break him of the habit his trainer, Guy Marks, sets a supposedly tame lion loose on the base to scare Monroe, but two lions get mixed up and Satan the Killer terrorizes the post.  Does Munroe save the day?  Actually ... no.

TV Pilots are still made today to test on audiences as to whether they might be successful, but they are mainly made to sell to a sponsor.  At the end of MUNROE the four stars plus mutt talk directly to any potential sponsor trying to convince them it will be a great hit.  If a pilot is sold and produced, then the pilot episode often becomes the premiere episode in the series.  If not sold, that's all folks and the producers often fail to even copyright them.

MUNROE might have made it through a season or two on television.  You can judge for yourself from these clips:


Visit my website at Festival Films.
Posted by Ron Hall at 11:18 AM