Batter Up! -- Touching All Bases! 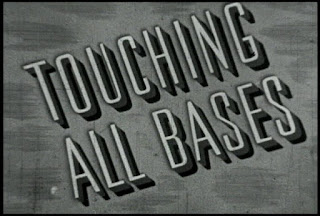 I would describe myself as a casual fair-weather baseball fan.  As a kid the family traveled to Milwaukee, Wisconsin, 2 or 3 times to see the Milwaukee Braves play when Hank Aaron was their main star.  Win or lose, don't recall, but it was quite an event.  I do remember the ball park and the 90 minute car ride to get there.  I have lived most of my life in the Twin Cities and follow the Minnesota Twins.  I saw a couple of games in the 1970s in the old Met Stadium whose site is now occupied by the Mall of America.  The spot inside the mall where home plate sat is memorialized by a bronzed home plate set into the concrete of the amusement park.  An immense distance away on the far wall is the actual stadium chair that Harmon Killebrew dented with an upper deck home run, placed the exact distance from home.

I also saw a few games in the domed Metrodome where the Twins next played for many years.  In 1981 I somehow got tickets to the 7th game of the World Series and took my ten-year-old son Jeff.  The game (Twins Win!) has gone down in baseball legend as the "Most exciting one-run game ever played."  The scariest moment was when the other team had the bases loaded, the ball trickled a few feet ahead of home and we got a double play catcher to first back to catcher.  Jack Morris pitched into the tenth inning after demanding to be kept in.  Manager Tom Kelly said, "OK, it's only a game."

The Twins are now in their third season in a gorgeous, fan-friendly new ballpark called Target Field.  I saw one game in the sold-out first season, a standing room only ticket in which they fell behind 4 nothing in the first inning and eventually lost, but it was great fun and Jim Thome hit a homer.  They won their division that year but lost in first round of the play-offs.  Last year the Twins fell to last - worst team in baseball.  This year they are 2 wins & 4 losses today, but hope springs eternal. 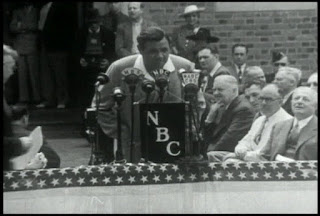 Moving on to movies, I am about to release on DVD a rare baseball documentary called "Touching All Bases" made in 1939.  It was produced by Kellogg Company, so kind of a commercial for them, and was made available on 16mm film at no charge to schools and civic and sports organizations throughout the country.  1939 was touted as the 100th birthday of baseball, or at least in America, although the once accepted story that Abner Doubleday invented baseball in Cooperstown, New York, in 1839 has been debunked by historians over the years.  Still, in 1939 they opened the famous National Baseball Hall of Fame and Museum in Cooperstown, New York.  Babe Ruth and Ty Cobb spoke at the dedication and this footage is among the many highlights of this 44 minute film!

The film starts with kids playing sandlot baseball, who are then invited to see a Boston Red Sox game and baseball movies by the Boston manager.  The film visits 8 of the 10 American League parks in 1939, the museum dedication ceremony at Cooperstown and an exhibition game by Father Flanagan's Boy's Town.  Part of the film is instructional baseball about how to bat and field conducted by pros like Joe Di Maggio.  Preparation for the first night game is shown.  Highlights from the 1939 World Series include Di Maggio's steal of home in the tenth inning.

This is a terrific "Lost & Rare" film for all baseball fans, to be available with other sports films on May 1 from Festival Films.  Watch for the official announcement and a new website right here.  Meanwhile, here is a sneak peak at "Touching All Bases."


Visit my website at Festival Films.
Posted by Ron Hall at 12:38 PM