Rocketing Into the Future & Reliving the Past! 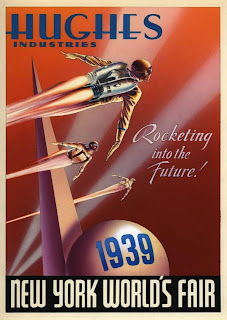 After no blog posts in January, and I am not sure why, I have put up comments that are hopefully of interest to some over the past five weeks. This week I had no inspiration until I found this poster for the 1939 World's Fair on Facebook. I just wanted to share the poster!  Our future may be brighter than the past and we can rocket into it quickly.  Just take off and there it is.  Optimism in 1939 ended in war in 1940.  But tomorrow is another day and here we are in 2012 when the Mayan calendar predicts the end of the 4th age of man, but not the end of the world, rather the start of a much brighter 5th age of man.  Ask me at the end of the year if we all blast off by then and where we might be going!

There are endless wonderful images on Facebook, I guess if you have the right "Friends" who post on similar interests.  I found this one posted by Matthew C. Hoffman, who is a Facebook friend who I don't really know.  He is running a Screen Deco film series in Park Ridge, Illinois.  Here is His Album of terrific stills and posters from art deco classics like She, Cleopatra, Madame Satan and Things to Come.

1939 has been heralded as Hollywood's finest year.  Memorable as they are, I would not pick Wizard of Oz or Gone With the Wind as my favorites today.  Here are some I do really like and will watch again and again whenever I find them on TCM: Stagecoach, Destry Rides Again, Gunga Din, Young Mr. Lincoln, Of Mice and Men, Hunchback of Notre Dame, Four Feathers, Drums Along the Mohawk and Man in the Iron Mask.  Outstanding serials of 1939 are Zorro's Fighting Legion, Daredevils of the Red Circle, Dick Tracy's G-Men and The Phantom Creeps. 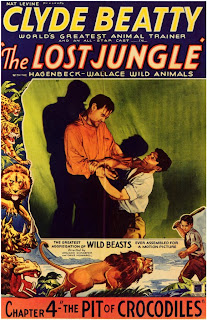 Drastically shifting topics, for some years I have sought out films that made an impression on me as a kid, say before the age of 14 or even younger.  I need to accept the fact that some movie memories may have never been filmed, they are dreams or false memories based on films I did see.  I did see the attack of the Giant Vulture Bats at the age of 8 in "Tarzan Escapes," since extensive research supports the memory, and I still hold out hope that this scene will someday be found.

Here is a memory I still have but can't find the scene in any film.  It is a jungle serial chapter ending that I saw on 1950s TV.  I recall the first chapter ending in a plane crash in the jungle, a very logical way to start a serial.  The ending of either chapter 2 or 3 is the one I can't find.  The hero and I am pretty sure the heroine with him are in a pit of crocodiles on a ledge just above all those snapping jaws.  In order to escape they need to make their way along the ledge to the other side where there is an escape door.  A stone slips and they appear to fall in the pit as the chapter ends.  I also thought this was a Clyde Beatty serial.  His 1934 Mascot serial The Lost Jungle ends with a dirigible crash in chapter one.  Chapter 4 is called "Pit of Crocodiles" but at the end he is dangling above the crocs hanging on for dear life -- no ledge or escape door.  There is no scene like I recall in his 1936 Republic serial Darkest Africa either.  I have looked through every other jungle serial I can find and no crocs-with-ledge scene.  I do have a few rare ones to someday acquire and look through, like Buster Crabbe's 1952 King of the Congo.  (Could I possibly have seen the lost Crabbe serial Tarzan the Fearless as a child?)

For Christmas I got myself the first two volumes of Floyd Gottfredson's collected Mickey Mouse newspaper comic strips. Floyd was the equal of Carl Barks in high adventure stories set in the old west, haunted houses, pirate islands or the Yukon. Comic fans must read these superb stories as they originally appeared in newspapers starting in 1929. The 1932-33 story "Blaggard Castle" involves Mickey and Horace Horsecollar vs. 3 mad scientists in a haunted castle. The setting either inspired the Mickey cartoon "The Mad Doctor" (1933) or was inspired by it since Floyd was aware of every Mickey cartoon in production. I suspect he saw the storyboard for the cartoon and turned the idea into the cartoon strip that ran about the same time the cartoon hit theaters.

In the comic strip, but not the cartoon, Mickey enters a crocodile pit and walks along a ledge, as shown in the few panels just below. Could I have seen a reprint of this strip as a child and transposed it to a jungle serial I saw on television??? I don't think so, but who knows?  I will keep looking.

Visit my website at Festival Films.
Posted by Ron Hall at 11:51 AM