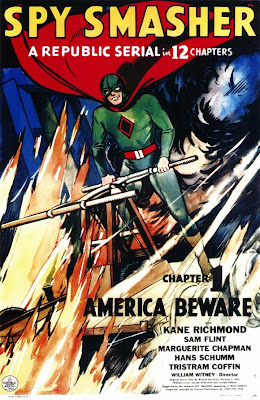 I have always loved serials and talk about them here often.  They are the first films I recall ever seeing.  They were totally unique with their high action, certain-death cliffhanging endings.  Frankly, they were made for kids and mostly boys.  I must have felt that at a young age like having an affinity for superhero comic books.  And parents did not approve of any of the action adventure mayhem.  (I should have asked my parents what they liked as a kid.  I did find my dad's collection of 1920s books about the adventures of boy inventor Tom Swift and my mother's first editions of Nancy Drew, which I read.)

All the serials I saw before the age of 12 were mostly Mascots and Universals.  16mm prints of most Mascots circulated to TV stations in the 1950s.  Would sure like to have some of those now, though many current video versions like "The Miracle Rider" seem to exist in excellent shape due to these prints.  My first serial experience written about recently was "Junior G-Men," but I also saw the other two Dead End Kids ones at the Free Movies in the Park -- "Junior G-Men of the Air" and "Sea Raiders" with one thrilling ending (stock footage) of Billy Halop wrestling with an octopus.  Other serials of my youth: "Mystery of the Riverboat," "Great Alaskan Mystery," "Phantom Creeps," "The Lost Jungle," "Gang Busters" and "Lost City in the Jungle."  "The Lightning Warrior" on TV had a lasting effect because of the hooded mystery villain The Wolfman; I would dearly love to get a mint copy so I could share this public domain serial, but the existing ones are missing footage and poor picture quality. 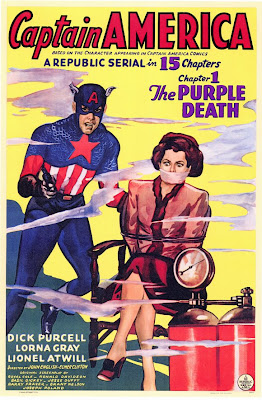 In high school a serial revival came out of the blue when some movie theater showed all 15 chapters of "Batman."  It caught on as high camp because of the WW-II Jap menace hammily played by J. Carroll Naish.  Packed theaters led directly to the Batman TV series.  It came to Madison and I went and ... wrong film!  They showed the anemic "New Adventures of Batman and Robin" instead.  Of course it did well, so the same theater brought in a Saturday Matinee for two weeks, 6 chapters and then the next 6 chapters, of an atrocious Columbia serial from 1953 "The Lost Planet."  I went the first week but could not stand it because of, well everything, but particularly the scene where two space ships meet in outer space and open their cockpits so the pilots can talk to each other without even space suits.  Can this possibly be a correct memory?

I thought I had put serials behind me along with comics when I got into college, but suddenly one day in 1965 the first Republic serial entered consciousness -- "Captain America."  The University of Wisconsin Student Union had a large lunch room that suddenly started showing chapters every Wednesday from noon to two.  They showed the same chapter four times, then the next one the following week.  I missed chapter #1 that has one of the great cliffhangers ever -- CA is fighting baddies on the top floor of a skyscraper that is completely demolished due to an earthquake machine.  The elevator is out of commission, so he escapes by ....  The serial features the most deaths by falls from a high place, plus some of the best choreographed fist fights ever.  In every chapter the Captain fights two henchmen in a setting like a generator room where a time bomb ticks down.  Last shot shows the entire block blowing up!  I watched all four shows each week.  The series continued though I am drawing a blank as to which ones other than "The Desert Hawk" with Gilbert Roland.  I think they showed "Captain Marvel," but I should really remember, huh?

I owned some 16mm serials for awhile, mainly "Daredevils of the Red Circle" which is A-1 tops except the last chapter is a dud and shot mainly at night so I couldn't see much on my dupe.  I owned the first Flash Gordon serial, one of the best ever, that I had seen on TV as a child.  Love the ending of chapter #2 where he is grabbed by a dragon.  I still have "Spy Smasher" which is my all-time favorite though I only watch it on video these days.  Those two have the two best chapters endings of all time, both of Chapter #1, and I will discuss that someday.

For years I had some great serial trailers on 16mm but I lost them.  They were from Republic serials and rather hard to find since oddly VCI had issued lots of serial trailers but not famous ones like Captain Marvel, Perils of Nyoka and Spy Smasher.  Only recently did I get all but Spy Smasher on DVD thanks to a friend.  Quality is quite nice and I believe they came from the Republic laser discs of quite a few years ago now.  I made the following montage from some of them for a new project.  Enjoy a few thrills!

Visit my website at Festival Films.
Posted by Ron Hall at 9:08 AM