NAPOLEON -- Silent Event of a Lifetime! 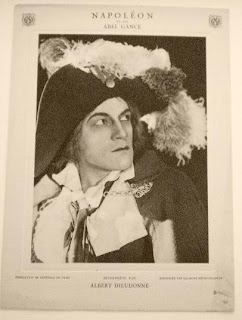 The film event of a lifetime happens this month just four times.  Four shows.  One magnificent setting in Oakland's Paramount Theater.  A Symphony orchestra.  Silent movie fans gathering from around the world.  Do not miss ... Abel Gance's Napoleon.  Complete information about the film, the theater and how to get tickets is at the San Francisco SILENT Film Festival website.  Here are a few notes from this site:

Abel Gance’s epic NAPOLEON is the Holy Grail of silent masterpieces. In the early 1980s, Francis Ford Coppola toured a 4-hour road show version that many still consider their most unforgettable movie experience ever. Now, over 30 years later, the San Francisco Silent Film Festival is finally presenting legendary film historian Kevin Brownlow’s complete 5 1/2 hour restoration in the United States, along with the American premiere of the magnificent score by Carl Davis, at the Art Deco Paramount Theatre, Oakland. Mr. Davis will conduct 48 members of the Oakland East Bay Symphony for these four unique screenings, which also feature the original “Polyvision” three-screen finale. Due to the expense, technical challenges, and complicated rights issues involved, no screenings are planned for any other American city. This monumental event is being presented by the San Francisco Silent Film Festival, in association with American Zoetrope, The Film Preserve, Photoplay Productions and BFI.

The list below is the top ten reasons why every cineaste must attend one of the four rare, never-to-be-repeated showings if at all possible  The list was compiled by Thomas Gladysz with a few additional notes by me in parentheses.

10) BACKGROUND: "Film historian Kevin Brownlow has spent much of his life piecing together this lost masterpiece which had been dismissed, neglected, cut up, reworked, and scattered by the winds of time." 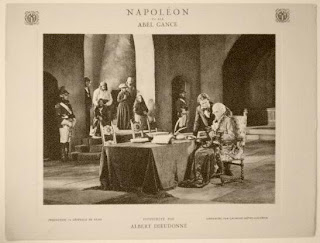 9) KEVIN BROWNLOW: "In the March issue of Vanity Fair, Martin Scorsese wrote,  'If you love silent movies, Kevin Brownlow should be your hero.'"  (Mr. Brownlow will attend each screening.  A dinner gala can be attended on March 24 and he will give a lecture about his lifetime restoration of the film on March 30.)

8) SETTING: "Thanks in part to the Oakland Paramount - a temple to the motion picture experience - movie-goers who attend Napoleon may well find themselves spellbound in darkness."  (Numerous photos of the Paramount or on view at the website.)

7) MUSIC: "Carl Davis' score is a marathon and masterful work of film scoring which has twice been expanded to keep up with newly found footage."

6) CARL DAVIS: "Davis has written music for more than 100 television programs and feature films, but is best known for creating music to accompany silent films, including key Brownlow restorations."  (Carl Davis will conduct 48 members of the Oakland East Bay Symphony at each performance!)

5) BIGGER AND BETTER: "This current and likely final restoration, completed in 2000 but not previously seen outside Europe, reclaims more than 30 minutes of additional footage discovered since the earlier restorations while visually upgrading much of the film."

4) GREATEST FILM EVER MADE: "Here is what Vincent Canby had to say in 1981 in the pages of the New York Times. '...One suddenly realizes that there once was a film that justified all of the adjectives that have subsequently been debased by critics as well as advertising copywriters. Napoleon sweeps; it takes the breath away; it moves; it dazzles.'" 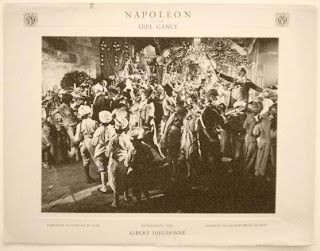 3) POLYVISION: "There are few movies so innovative, so daring and so hugely ambitious... For the finale, the screen expands to three times its normal width - a kind of triptych - while showing panoramic views and montages of images.  There really hasn't been anything else like it, not even Cinerama...  Prepare to be amazed."

2) VALUE: "For a five and a half hour movie (the length of three contemporary films) accompanied by a live symphony orchestra (a concert ticket too), the ticket prices to Napoleon are rather inexpensive."

1) EXPERIENCE: "In ten or twenty or thirty years, when this screening of Napoleon is only a memory, film lovers will ask - were you there? 'Did you see the Napoleon at the Paramount in 2012?'"

The lobby cards in this blog are very rare from an acquaintance who was looking to sell them some time ago.  I don't know what they are worth or whether they did sell, only that they are super rare.  The one at the top does NOT picture Napoleon or it would be worth a whole lot more.

Visit my website at Festival Films.
Posted by Ron Hall at 12:16 PM