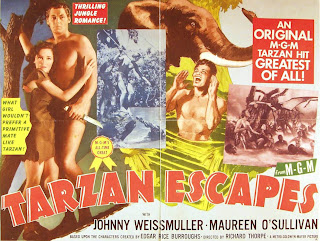 "Bat Bait" refers to advertising a movie scene with giant bats.  I would watch a film just to see Tarzan fight bats.  Wouldn't you?

To summarize past posts, in 1954 at the age of eight I saw the national reissue of Tarzan Escapes in a movie theater. In the intense and scary climax the safari enters a ju-ju cave where they are attacked by giant vampire bats.  I never forgot but I have never seen this lost horror sequence again.  I have been on a six year quest collecting info and trying to alert people to look for the lost footage, which may well survive in prints of the film residing in foreign archives.  Most foreign posters from both 1936 and 1954 mention the bats, so the prints must have had the elusive scene.  If you hold such a print deep in a Mexican or Italian vault, look at the last ten minutes of it!

The half-sheet movie poster shown here is from this 1954 reissue, and is the only USA poster that shows the bat scene.  It was up for auction at emovie-poster.com this past week.  I bid $90 but lost out to $99.  I might have bid more except I forgot about the deadline!  A few years ago I missed out on the same poster that I believe sold in the $190 range.  The owner of the highly reputable and long-standing auction house emovieposter.com is Bruce Hershenson.  I got Bruce interested in the lost film aspect such that he discusses it like this whenever a Tarzan Escapes item is up for auction: 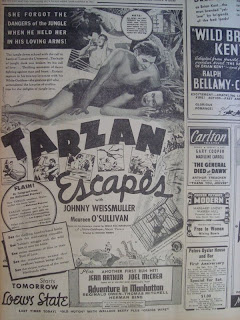 Tarzan Escapes, the 1936 Richard Thorpe & William A. Wellman African jungle adventure fantasy horror action thriller ("It's NEW! It's AMAZING 2 years to produce"; the second sequel to the hugely successful "Tarzan the Ape Man"; "Based upon the characters created by Edgar Rice Burroughs") starring Johnny Weissmuller (in the title role as Tarzan; the 1924 Olympic swimming champion who is best remembered for playing Jungle Jim and for his role in this series), Maureen O'Sullivan (as Jane), John Buckler, Benita Hume, William Henry, and Cheeta (the chimpanzee).

Note that I thought that I knew a lot about early Tarzan movies, but it turned out I did not know any of the important facts about this movie! Unknown to me, the movie was actually filmed in 1935, and there is a major subplot involving Tarzan, pygmies, and vampire bats, basically making it a horror film! The studio hated the movie, and hired a new director to re-film it in 1936, and they junked all of the 1935 movie EXCEPT for the major vampire bat scene in the cave at the end, and they made drastic changes to the plot (added the tree house home, no great apes, no Jane rescuing Tarzan at the end, etc)! The 1936 version was previewed and mothers complained that the movie was too violent and scary for their kids, so the sanitized version that exists on video today was released to some 1936 theaters. However in 1954, when the movie was re-released, MGM used the uncut negative with the vampire bats. Sadly, when the film was made available to TV and for 16mm rental in the 1960s, MGM again used the censored negative, so there is now no complete print of the 1936 "director's cut" (and of course, the 1935 version is lost as well). But this is just a summary. You should read the collector's entire blog on this at http://caferoxy.blogspot.com/2010/10/still-batty-about-tarzan-escapes.html

It's an accurate summation of my researh.  Thanks, Bruce.  So what is new with my search? 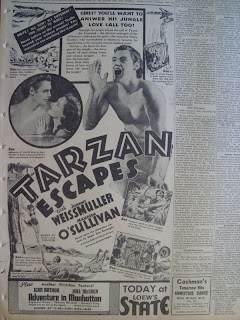 I occasionally check Tarzan Escapes items on ebay and was surprised to find two original newspaper ads.  I could "Buy It Now for $25 each" but capturing the images onto my computer suits me just fine.  Both are included in this post.

They advertise showings at Loew's State Theater in Providence, RI starting Nov. 6, 1936.  Both ads have tiny images of the bat attack.  This is further proof that the un-cut bat prints were widely shown in the original 1936 release, along with the censored prints elsewhere.  Tarzan had never fought giant bats before or since.  No movie depicts such a scene.  Bats were a big draw and distinguished the film from other Tarzan films.  I assume that no theater could advertise vampire bats and then show a film without any bats.  Audiences would have gone wild. 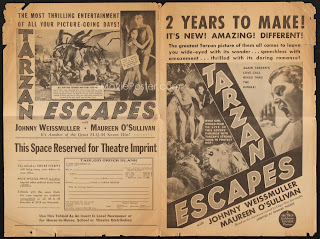 Emovieposter.com has a helpful feature whereby one can sign up to get notices of any auction items on your favorite film.  This alerted me a few weeks ago to the auction of a "Herald" for Tarzan Escapes, which I did bid on and get for under $20.  A herald is a promotional insert that newspapers can include if a movie theater pays for them.  MGM sent out sample heralds in their publicity kit, which this was, as opposed to one actually distributed in a newspaper.  It makes more sense that such a fragile piece might survive for years in a pile of press books, etc., from some movie theater than that some fan would save one from a 1936 newspaper. 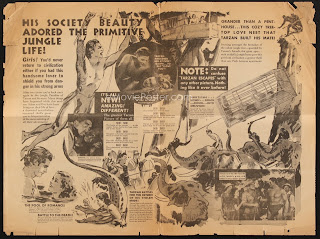 "This Space Reserved for Theatre Imprint" on the back cover of the 4-pager includes an order blank to order the things from Post Publishing in Appleton, Wisconsin, with the theater playdate info, at a cost of $3.50 per thousand.  It points out: "This tabloid on TARZAN ESCAPES will bring many extra dollars to your office."

Note that the cover has a large picture of Tarzan and Jane in a tree fending off lions.  This scene does not exist, but was part of the lost 1935 version of the film!  A brief shot from the cut and lost "dozens of lions" scene does show up in the opening montage right after the credits of other Weismuller Tarzan films like Tarzan's New York Adventure.  Look fast for the lions next time you watch this one!

The inside two-page, newspaper-size spread also mentions the bat battle in tiny print: "See! See! The giant vulture bats swoop from the sky in a vicious air attack!"

Lastly, I ran across this clip on Youtube from the excellent TCM documentary about the MGM Tarzan films.  Maureen O'Sullivan discusses filming the dreadfully uncomfortable swamp/bat scene.  She concludes that the scene was cut from the film.  Not true!  I saw it and hope to again.

Visit my website at Festival Films
Posted by Ron Hall at 10:23 AM