No Holiday Too Small! 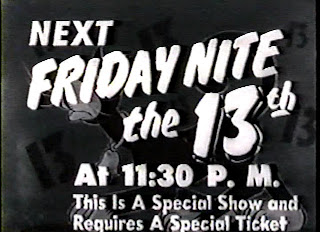 I started the week looking for some 10 second video horror clips to turn into introductions for "Spooky Stuff!"  Why I am stuck on that silly title, I really don't know.  The idea is to make short sequences from horror movies and trailers for Movie Memories and another project still in development.  I found some perfect bits I had forgotten I had.  These were movie trailers for special horror shows on Friday the 13th (how else could you turn it into a holiday) and of course Halloween.

The film titles are not given so theaters could use the same trailers year after year.  Since all the films were revivals from years before, the specific titles did not matter much.  More important, and lest we forget, is the "suggestion" to "Bring your date and have a party...!"  What better opportunity ever presented itself for necking and making out in the dark.  You can watch two of these trailers that run 50 and 32 seconds in the video below and then see how I turned them into "Spooky Stuff" intros, or I should say "Spooooky Stuff!" since the word is spookier with extra "o's" in there. 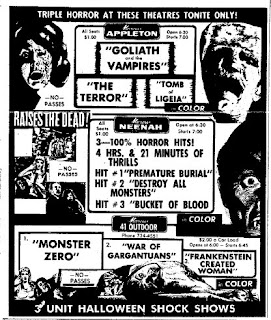 This got me remembering newspaper ads in the 1950s for horror revivals I would have killed to have seen as a kid.  Never got to any.  We had no movie theater in Deerfield, Wisconsin and excursions to Madison were rare and NEVER for any midnight show.  I never even asked since I wasn't allowed to see horror films on TV or stay up late.  In 1962 we moved to Madison and I could go to movies on my own, but not at midnight.  I recall an all-afternoon quadruple feature that included "It Conquered the World" and I have no idea what else.  I did attend one live Spook Show when I was in high school and wrote about it HERE.  I also went to all the Edgar Allen Poe Vincent Price films, Ray Harryhausen films, etc.

I just looked for some of these ads on the Internet and could not find much at all.  If anyone knows of a website showing thousands of movie newspaper ads, please let me know.  You sure had a choice on this one Halloween in Appleton!  3 Theatres!  9 Horror Hits!

A further re-watching of my forgotten video reminded me that movie theaters used any Holiday as an opportunity to celebrate it with them -- Father's Day, Mother's Day, a Valentine's Day cartoon matinee, New Year's Eve and even New Year's Eve Matinee.  I put some of these brief trailers into the video below.  Amazingly, one is for a series of Roy Rogers matinees at the Majestic Theatre in Madison, Wisconsin, where I did watch movies in the 1960s, but was not around when the trailer advertised them in the 1940s.  Kids could get free tickets from a bank; all the theater wanted was their concession money.  I bet the place was packed week after week.

Visit my website at Festival Films
Posted by Ron Hall at 12:00 PM