As this recently unearthed Czechoslovakian poster for Tarzan Escapes illustrates, the Czechs got to see Tarzan fight giant vampire bats in 1936. All of Europe probably saw the same version. The Bat Attack was the best scene in the film and is highlighted on this poster (which I got in a poster auction last week).

Yet this action/horror/mayhem scene that was the climax of the entire film has not been seen since the 1950s. I can never forget seeing it in a movie theater as a kid of eight, especially the shot of a giant bat picking up a native and flying him off to a fate worse than death. My childhood memory and quest to find this elusive scene somewhere in the world is documented at the Edgar Rice Burroughs website in an article I Saw the Giant Vampire Bats.

In 1954 MGM re-released a double feature of Tarzan, the Ape Man and Tarzan Escapes to theaters in new 35mm safety prints. I had never seen a Tarzan film before and had no idea (no one did) that the bat scene would disappear from all subsequent showings. The newspaper ads promised "SEE! ... The giant vulture bats swoop from the sky in a vicious air attack!" The MGM Press Book for Tarzan Escapes, also in my hands, describes the thrills:

"The story takes its characters into a country of giant vampire bats, and its thrills include a battle between an army of elephants and savage warriors, the routing of lions by an elephant stampede, a dash through a crocodile-infested river, the rescue of the white party from the wild Ganeloni (sic., should read Gaboni) tribesmen, and Tarzan's escape from a cage in which he has been imprisoned when he hurtles the cage over a cliff."

Interestingly, the elephants attacking lions scene was filmed for the 1935 version of Tarzan Escapes that was never released! So this scene and the entire 1935 film are completely lost! MGM had entrusted Tarzan Escapes to director James C. McKay who had never directed a sound film and never made one later. McKay had directed some action scenes in Tarzan and His Mate but apparently had no story sense. Tarzan Escapes was finished and scheduled for release in 1935 with an advance trailer mentioning the bats that you can watch here. However, studio bosses were appalled at a preview showing when they found the film absolutely terrible, in fact un-releasable. The costly decision was made to re-write and re-shoot the entire film under director Richard Thorpe, keeping only the attack of the vampire bats. 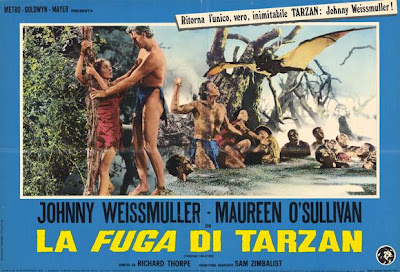 The 1936 film was previewed to audiences to more woes. Some mothers complained of the extreme violence so loudly that MGM hastily edited a sanitized print that eliminated the intense vampire bats scene. They also cut a scene of Tarzan fighting and killing two lions with his knife. The scene is set up in the surviving version when Jane tells Tarzan to go get food. He slays an antelope, is menaced by a lion but escapes without a fight. The missing fight was actually stock footage lifted from Tarzan the Ape Man, so that scene can be reconstructed today. 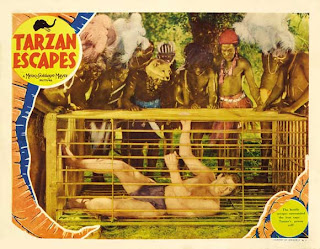 A minor censored scene is illustrated on this 1936 lobby card. Evil Captain Fry captures Tarzan and dispatches the cage back to civilization with a group of his natives so that Jane will not see Tarzan captured. The violent Gaboni warriors, shown here, slaugther these natives by shooting arrows into their foreheads in the deleted scene and then carry Tarzan in cage back toward their village. He escapes en route. The grisly slaughter was a simple cut for violence, but an important one that added to the suspense when all are captured and tortured.

For the 1954 Tarzan double feature reissue, MGM had two negatives in their vault of Tarzan Escapes -- the censored one and the far better one that they wisely chose to release. In the 1960s when they made prints for TV, for 16mm rentals and for eventual video release, they picked the censored version in error and that is all we can see today. I don't for a moment believe it was 1960s intentional censorship. I suspect the person in charge had no idea there were two versions and may have picked the negative that had seen less wear. 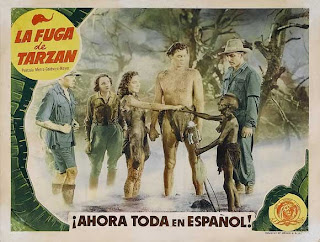 It is my strong feeling that the Vampire Bats version was widely shown in Mexico, South America and all over Europe in 1936. This Spanish lobby card shows a pygmy tribe in the cave/swamp after they save the safari from the bats. Of course there are no pygmies in the surviving film.

This lobby card mentions the film is "En Espanol" or Spanish language version. MGM probably archived this Spanish dubbed version of the film, and may well have re-released it on safety film to Mexico and South America in 1954. If the film survives in any foreign archive from the 1936 or 1954 releases, then the bats may be waiting for discovery. The problem in the past is that nobody knew they should look for the bats because Tarzan Escapes seemed to be well preserved on DVD with occasional showings on Turner Classic Movies. Archivists today are aware of the lost bat scene and are in the process of examining MGM prints in foreign archives.

You can help spread the word! Alert film archives! Anyone, anywhere ... watch the last ten minutes of Tarzan Escapes to see if anything happens inside that ju-ju cave. Somewhere the Vampire Bats are lurking to attack!

If you too recall seeing the vampire bats in a movie theater in the mid-1950s, please write to Ron Hall at fesfilms@aol.com.

Visit my website at www.fesfilms.com.
Posted by Ron Hall at 8:09 AM