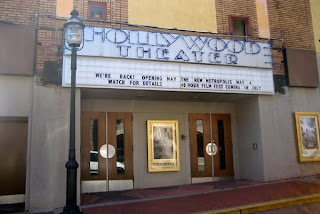 It's always gratifying to hear about a Café Roxy series finding an audience that likes the programs and builds from week to week. That's the way it is supposed to work, but I don't often get feedback unless the customer wants more. Such was the case this week in a phone call from one of the programmers at the Hollywood Theater in Dormant, PA.

The Hollywood Theatre, one of two theatres in the Pittsburgh suburb of Dormont, stood closed and shuttered in 1998 after screening Paul Newman and Susan Sarandon in “Twilight”. After nine years it re-opened on 30th March 2007 with “Night at the Museum” and “Dreamgirls”.

For many years in the 1950’s and 1960’s the Hollywood Theatre, with its seating capacity of 980, was one of Stanley Warner’s main second-run neighborhood houses in Pittsburgh, and even enjoyed a spell as a first-run house in the late 1960’s. Later on, Associated Theatres bought S-W’s holdings in the area, which were then sold to Cinema World. The Hollywood Theatre was closed on May 25, 2008.

On June 27, 2009, the Hollywood Theatre reopened for monthly classic movies. Motion Picture Heritage are the new operators.  Their successful programming mixes the old and the new.  Some films shown in August were The Perfect Host with David Hyde Pierce, Beat the Devil, Lee Van Cleef in Day of Anger, To Catch a Thief and Munster Go Home!

The Café Roxy success they reported on was for our "12 Nights of Horror" series, which has been running every Wednesday night for $7 admission.  It seems they added a few wrinkles. When they showed "The House on Haunted Hill" they flew a skeleton over the audience.  That's what William Castle told theaters to do back in 1959, but who has done it since?

Then a few days ago they showed "The Brain That Wouldn't Die" and recreated the head and lab setting onstage.  Whenever the head appeared in the movie, a spotlight came up on the body-less actress.  I forgot to ask if she spoke the lines in the movie.  It's gimmicks like this that will garner local publicity and larger crowds.

The Hollywood plans to run horror all through October and plans to include our "Turkeys in Space" series of sci-fi clunkers.  This week they ordered the 2-hour "Monster Mania" collection of classic trailers and spooky cartoons and the 1950s Space TV program from Matinee series #2.

I included a free DVD of the just finished "Spoooky Stuff" Volume 1.  This is a refinement of Monster Mania that includes excerpts from features, anything spoooky like a scene from the 1926 The Bat.  The one-hour of clips is followed by the "Thriller" TV show "The Return of Andrew Bentley."  This show is not yet on my website, but is finished.  On to Volume 2!

I suggested that the Hollywood re-create a "Spook Show" onstage for Halloween itself with a magician act and running "Monsters Crash the Pajama Party" where the gorilla and other monsters come off the screen into the audience to select a girl victim.  They liked that idea and may use a rising horror host on Pittsburgh TV, Mr. Schlock.  Sounds like a team-up born in Hell.

It's never too early to plan on a Spoooky Halloween.  (Adding the extra "o" makes it 3 times spoookier!"

Visit my spoooky website at Festival Films.
Posted by Ron Hall at 9:22 AM