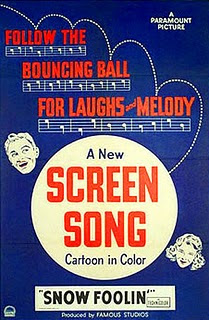 Audience Sing-Alongs to words projected on a screen go back before 1900 using magic lanterns.  The famous "Bouncing Ball" debuted in 1924 in the Max Fleischer "Ko-Ko Song Car-Tune."  The first song was "Oh Mabel."  A superb discussion is in this Nov. 2007 entry in the  Bijou Blog (that I may have helped write, not sure).  Fleischer made many sing-along cartoons in the silent era with a seamless transition into the sound era  up through 1938.

In 1945, Famous Studios, successors to the Fleischers, revived the Screen Songs as an all-animated series in color. The earliest color Screen Song was part of the Noveltoon series -- "When G.I. Johnny Comes Home Again" -- and was released on February 2, 1945.  This series produced around 40 cartoons thru 1951.  Both the Fleischer and Paramount sound ones are listed by title at Wikipedia."

Audiences singing out loud and together in a movie theater was tremendously popular, which may be hard to believe by anyone who did not share the experience.  The words appeared onscreen as the Bouncing Ball bobbed from one word to the next so the audience was never in doubt just what to sing, in case they were not familiar with the song.  Over 25 of the color ones are in public domain and I include them in volumes of Movie Memories.  Seniors sang along way back then in theaters in the 1930s and 40s and they sing along today.

Although the cartoons are clearly in the public domain, some of the songs are still copyrighted.  In most cases you can use films (with © music) as public domain without paying royalties to the owner of the music.  The theory goes that the music was paid for when the film was made and when the entire entity goes into public domain, then you can show, sell, broadcast or use the complete film anyway you want.  If you take an excerpt out of a film to use in a documentary, then you need to separately clear rights to any music involved.  Most TV stations still have an arrangement with ASCAP that allows them to show any films without clearing music rights.  I don't know what rules might apply for using public domain films with music on the Internet.

The only time I recall being contacted about music was 30 years ago re. the score by Virgil Thomson on "The Plow That Broke the Plains" (1936).  I offered it for sale on 16mm at the time, which rarely sold.  I don't recall what I wrote back, but never heard from them again, not even when I began selling it on video and now DVD.  If I tried to sell this or any film with music to Turner Classic Movies, then I would certainly clear music rights if needed to be completely safe.

Today I am considering turning more of the color Screen Songs into Movie Memories for a situation that might request either song clearance or assurance that the song was also in the public domain.  The series used familiar standards so many of the songs were written before 1923.  This is the magic cut-off date for songs, films and books: all written before 1923 are public domain; most made in or after 1923 are copyrighted as long as they were properly renewed.  So here is a list of the Paramount Screen Songs that I have that are in the public domain along with the song included in each and the date it was written. 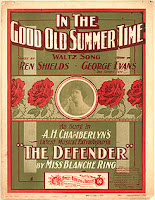 Well, that was interesting research. To Me!