New (to me) tool for Researching Copyrights! 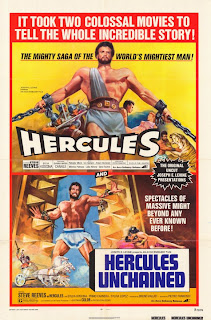 I check and re-check the copyrights on films all the time, certainly every week.  So it comes as a surprise that I have never blogged about the process before.  Oh, yeah, boring....  The process may be but the results are often fascinating. For one thing I found this past week that the 1958 Steve Reeves film HERCULES is in the public domain. Everyone else knew it but somehow I though it was copyrighted although I've been selling the sequel, Hercules Unchained, for years.  Now I can add the first film to my library.

Last week I got the notion that perhaps episodes of "The Howdy Doody Show" were indeed copyrighted although I had thought they were all public domain.  Some research did not turn up any registrations or renewals, and many episodes do not have the © notice with a date on them.

Actually I am not looking for copyrights, but for the lack of an original or renewal copyright.  For years I have used three rare and out of print books covering the years 1900 to 1939, 1940 to 1949, and 1950 to 1959.  They list all original registrations with the Library of Congress in alphabetical order for those years.  A typical short entry from the first volume is:

This is followed by the 1933 feature called "A Bedtime Story." The old rule was that each film needed to be renewed 28 years later, so the people compiling these books looked at renewal records 28 years later to see which films had been renewed (most were).  The 1926 one-reeler was not renewed and so there is no notation after the title and it is considered to be in the public domain.  The 1933 feature was renewed and so the book has the hand-written notation: R255994, 27Apr60.

This set of ten volumes is copyrighted 1973 by Walter E. Hurst.  Thank you, Walter! 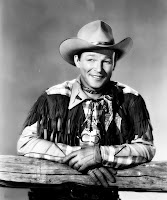 All registrations and renewals from 1978 to the present are online at the Library of Congress Website.  There are perils navigating the thousands of entries.  Be aware that "Type of Work: Recorded Document" is not a © registration or renewal.  The 3 entries for Roy Rogers Show: "Ambush" are all Recorded Documents, meaning they are mentioned in some kind of document that was registered with LOC, but the TV episode itself is in the public domain.  You see, you could produce a show and sell it and re-sell it without ever actually copyrighting it.  You still owned it within the first 28 years, but by then a production company may have gone out of business and the film or series lapsed quietly into the public domain.  Hurray for our side!
In 1964 the copyright laws were changed such that any film or TV show made in that year or later could be registered AT ANY TIME and did not need to be renewed.  So some American movies made for TV in 1970 are sold as public domain today because they have never been registered with the Library of Congress.  However, at this late date, they still could be registered by someone who had some connection to making the films in the first place.  That's a little off my present subject, but films made in 1960 thru 1963 still needed to be renewed, and if they were not renewed 28 years later they are clearly and forever in the public domain.  There is a 1960s film copyright book to match the earlier volumes, but I never got one.

So I had a gap in the research I could conduct myself for films 1960 to 1977.  I just discovered a website with the Library of Congress records of registrations and renewals from 1950 thru 1978. You can peruse this website of The Hathi Trust Digital Library that scanned original LOC documents in University of Michigan collection. 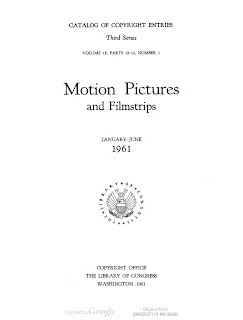 Scroll down to one of the years, like 1961, and then down that page until you come to Motion Pictures. Under renewals you find listed Universal's "Air Mail," Paramount's "Blonde Venus," Columbia's "Bitter Tea of General Yen" and lots more films all from 1933 which were properly renewed 28 years later in 1961 and are still protected by current copyright law until 95 years after they were made.  We can see those three films today, but we may need to wait until 2028 before enjoying Universal's 1933 "Afraid to Talk," a film picked at random from the list that I have never heard of in my life.  The big question in 2028 will be if anyone has the film or if anyone wants to see it then!

Or you can click on New Registrations and will come to the page shown above.  A few pages later I found listings for "Adventures of Jim Bowie" shows that first aired in 1957 and 1958.  The Library of Congress used to require registration of feature films during the year a film was released or the next year.  However, they started accepting late registrations for TV shows, so late that some were registered 28 years from when they were made and were renewed at the same time.  Some episodes of Jim Bowie are public domain today, but most are copyrighted including the ones I just found.

Happy browsing!  Remember that NOT finding any listing or NOT finding any renewal 28 years later is the prize discovery that means the film or TV show may well be in the public domain.


Visit my website at Festival Films
Posted by Ron Hall at 9:39 AM