Sing Me a Thousand Screen Songs!

Everyone uses Wikipedia as a quick source of information. Everyone should know they don't know everything. It says so right on the site. Thus last week I wrote there were around 40 color Screen Songs made by Paramount from 1945 to 1951, which is true, except this week I found more of them.  The history of Screen Songs at Wikipedia is well written:

The Screen Songs are a continuation of the earlier Fleischer series Song Car-Tunes. They are sing-along shorts featuring the famous "bouncing ball", a sort of precursor to modern karaoke videos. They often featured popular melodies of the day. The early Song Car-Tunes were among the earliest sound films, produced two years before The Jazz Singer. They were largely unknown at the time because their release was limited to the chain of 36 theaters operated by The Red Seal Pictures Company, which was equipped with the early Lee DeForest Phonofilm sound reproduction equipment. The Red Seal theater chain -- formed by the Fleischers, DeForest, Edwin Miles Fadiman, and Hugo Riesenfeld -- went from the East Coast to Columbus, Ohio.


Between May 1924 and September 1927, the Fleischers released 36 Song Car-Tunes series, with 17 using the Phonofilm sound-on-film process. The films included Oh Mabel, Come Take a Trip in My Airship, Darling Nelly Gray, Has Anybody Here Seen Kelly?, and By the Light of the Silvery Moon. Beginning with My Old Kentucky Home (1926), the cartoons featured the "follow the bouncing ball" gimmick, that lead the audience singing along with the film. The Fleischers were ahead of the sound revolution, and just missed the actual change when The Red Seal Company filed for bankruptcy in mid-1927. 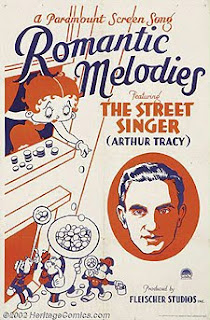 The Fleischers signed a new contract with Paramount Pictures in late 1928. Beginning in February 1929, the song cartoons returned under a new name, Screen Songs, using the Western Electric sound-on-film process. The first was The Sidewalks of New York (East Side, West Side) released on 5 February 1929. In the 1930s, the shorts began to feature such musical guest stars as Lillian Roth, Ethel Merman, Cab Calloway, Rudy Vallee, the Mills Brothers, the Boswell Sisters, and others. The series, which eventually focused on many of the "big bands" of "The Swing Era" continued until 1938.


In 1945, Famous Studios, successors to the Fleischers, revived the Screen Songs as an all animated series in color. The earliest color Screen Song part of the Noveltoon series, "When G.I. Johnny Comes Home Again." was released on February 2, 1945.

*****
The Wikipedia entry goes on to list all of the Fleischers and the 38 color cartoons that were in the official "Screen Songs" series from 1947 to 1951. The title screen as shown up above and the opening credits all include the catchy tune:


"Start the day with a song, and sing the whole day through.
Even while you're busy working, do just like the birdies do.
Though the day may be long, you never will go wrong.
Off key, on key, any old key, just start the day with a song!"
However, several Bouncing Ball sing-alongs appeared in the Noveltoon series before the SS series started: "When G.I. Johnny Comes Home Again" (1945),  "Old MacDonald Had a Farm" (1945), "The Goal Rush" (1946), "Madhattan Island" (1947, with two songs "Penthouse Serenade" and "42nd Street") and "The Mild West" (1947).  All five are in the public domain.  I have the fascinating "Madhattan Island," but the current quality is too poor to do anything with it. 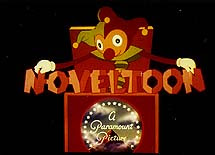 Last week I borrowed a nearly complete collection of Paramount cartoons from 1943 to 1967, minus the Popeyes and George Pal Puppetoons, but with Little Lulus, Little Audreys, Caspers, Buzzy Crows, Herman and Catnips, etc.  Some were poor quality, a few were black and white and some had great color.  Many were transferred from the 16mm prints distributed by U.M. and M and NTA TV in the 1950s and 60s.  I really don't know where this massive library came from.  (Before I forget, the images in this blog came from Jerry Beck's superb Cartoon Research site.)

I had wondered why the popular Screen Songs ended suddenly in 1951.  Turns out they didn't!  The series stopped, but Paramount kept making them through 1954, except the cartoons fell back into the Noveltoons series.  Did audiences start going to the concession stand if a cartoon song came on, but stayed to watch a normal cartoon?  It is impossible to tell in the first half if the Bouncing Ball will make an appearance.  I can't list all of these "extra" Song Cartoons because you can't tell from the titles listed in Len Maltin's "Of Mice and Magic" (1980) and I could not view one of the discs due to damage. These 1953 cartoons include Screen Songs: "Philharmaniacs," "Aero-Nutics," and "Invention Convention" where the audience can sing "Let Me Call You Sweetheart."

Right here and now you can enjoy "Candy Cabaret" from 1954, which just might be the last Paramount Screen Song ever made!  Sing along at home to "Ain't She Sweet!"

Visit my website at Festival Films
Posted by Ron Hall at 9:16 AM